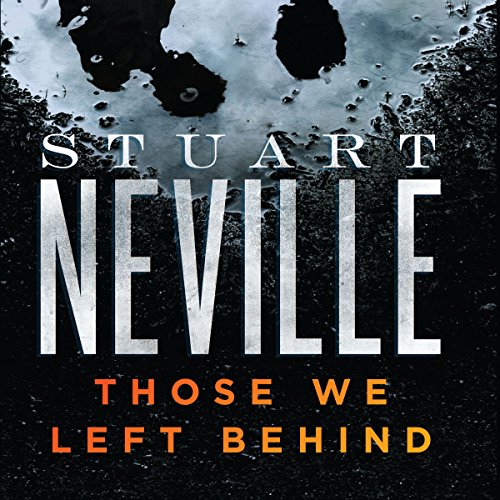 Those We Left Behind

By: Stuart Neville
Narrated by: Michelle Ferguson
Try for $0.00

Blood has always been thicker than water for two Northern Irish brothers caught in the Belfast foster system, but a debt of past violence will be paid not just by them but also by those they left behind.

Ciaran Devine, who made Belfast headlines seven years ago as the "schoolboy killer", is about to walk free. At the age of 12, he confessed to the brutal murder of his foster father; his testimony mitigated the sentence of his older brother, Thomas, who was also found at the crime scene, covered in blood. But DCI Serena Flanagan, the only officer who could convince a young, frightened Ciaran to speak, has silently harbored doubts about his confession all this time.

Ciaran's release means several things: a long-anticipated reunion with Thomas, who still wields a dangerous influence over his younger brother; the call to action of a man bent on revenge for his father's death; and major trouble for Ciaran's assigned probation officer. Meanwhile, Serena Flanagan has just returned to the force from her battle with breast cancer, only to endure the pitying looks of her coworkers and a mountain of open case files. She will soon discover that even closed cases can unleash terror on the streets of Belfast.

What listeners say about Those We Left Behind

I've become a fan of Stuart Neville, beginning with the first book in his "Belfast Noir" series, The Ghosts of Belfast.

In the fourth book in this series, The Final Silence, Neville pretty much "retired" his main character, Jack Lennon, and introduced a new one, Detective Chief Inspector Serena Flanagan. In Those We Left Behind, DCI Flanagan becomes the central character.

I wasn't that impressed by Flanagan's first appearance, where she seemed to fill the stock role of "lady cop who has to be a b---- to get by in a police department." However, she is much more fleshed out in this book. She has a maternal side that frequently gets her in trouble. She is also a wife and a mother, and a cancer patient. All of these drag personal issues into her case.

Those We Left Behind centers around two young offenders from early in Flanagan's career. Thomas and Ciaran Devine brutally murdered their foster father and spent the last few years in juvenile detention, but have now been let out as young men. Unfortunately, the elder Devine brother, Thomas, is as crazy as ever, and his younger brother Ciaran is still under his thumb. When the son of the man they murdered comes looking for closure, everything begins to unravel. Flanagan, who always believed something was wrong with the story the brothers gave in their confession, becomes involved, determined to "save" the softer, more vulnerable Ciaran whom she believes took the fall for his older brother.

As in all of Neville's books, there is a lot of gritty noir violence, cops and politicians who are skunks, and one good cop or two trying to do the right thing. Flanagan's superiors keep telling her to butt out of cases she's not assigned to and of course she keeps disobeying them, because of course she's always right when she thinks something is off about the official narrative.

Flanagan becomes a more sympathetic character than Jack Lennon was, but she's not just a woman doing a man's job. Her way of dealing with cases and suspects is different and it is affected by her being a woman and a mother. I found it realistic and well-written, very much like one of those better BBC detective dramas.

Good story,consistent with what we know & love from this author.
It took some getting used with new narrator. Not a voice I would have chosen bUT it's liveable.

having a heard time following a long.

I can listen more then an 30 mins. I don't know if it's the accent or the story. I can't focus with the story line

Omg. Yet another trope so disappointed

It starts out well. But. I'm getting sick and tired of women being punched for being police/psychologists or whatever.

Won't give too much away but this fits at least one of the below tropes: THE MOST UNNECESSARY TROPE EVER! In all likelihood our protagonist will be saved by a man. Often by the man that didn't believe/like her at first.

1. So she's a police but doesn't close the window by the fire escape? Abducted!

2. So, she's a psychologist and profiler with a great track record but even when her own theory suggests the crazy guy might look for someone JUST like her she fails to see it. Abducted!

3. So, she's a police who care about the juveniles she has to put in prison. Punishment: attacked in her home and husband questioning her job. "We need to think about the children".

4. So, she's known for being a brilliant police but is still questioned every step of the way. Ends up doing a secret investigation and putting her self in danger. Threatened by gun/knife/other weapon. Possibly almost killed.

Please, can someone give advice on crime/triller novels where women are allowed to be brilliant and be punished for it...

Where does Those We Left Behind rank among all the audiobooks you’ve listened to so far?

Stuart Neville's Ghosts of Belfast introduced me to Celtic Noir. It was my "gateway drug" to brilliant suspense writers like Adrian McKinty, Tana French and Stuart MacBride. It's been some time since his last novel was released, but this was worth the wait. At once tough and heartbreaking, he creates characters that are multi-dimensional, mysterious and engaging. The last few chapters were real white-knucklers, kept me mesmerized and holding my breath right to the end. Hope he brings back some of these characters.. Excellent!

What disappointed you about Those We Left Behind?

The narrator was annoying and I almost quit before the first chapter and the book was so predictable. I always enjoyed Stuart Neville's stories and I preorder this one. Wish I haven't. I think he just had a deadline with no ideas. Not one like able character in the whole book

Voice was shrilly and she tried too hard

Excellent performance of a great story

Stuart Neville did an excellent job with this and it is narrated beautifully. I loved every minute.

Hours and hours of DULL

My first and probably last book by this author

I didn't read the reviews.

I should have read the reviews, but it was a recommended choice. The book was read with an Irish accent, not sure why I didn't see that one coming. but I couldn't tell which character was talking or in scene because the inflection didn't change for characters really. The book was interesting but not really. I'm a thriller fan, but this was just an odd book.