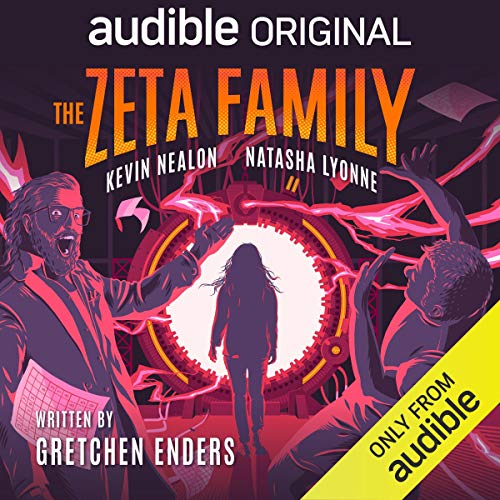 Set on a large ranch in rural upstate New York, it’s early days for the eccentric group of people who call themselves The Zeta Family — quite possibly the next big cult phenomenon.

Our protagonist, Katie, is an aspiring reporter who has decided to infiltrate the compound, and her future success as a journalist depends entirely on her ability to win the confidence of Zeta Doug, the likable spiritual leader of the group.

He’s like a cross between Hunter S. Thompson and George R. R. Martin, with a little too much sci-fi in his head and acid in his blood stream. Like all good cult leaders, Doug is elusive and mysterious, and Katie quickly begins to wonder if this cult is truly just a gnarly collection of weirdos hanging out in the woods, or is there something else going on here?

The Zeta Family was created and written by Gretchen Enders and Produced by Kelly&Kelly.

Recorded at Kelly&Kelly Studios and on location in Vancouver, British Columbia, Canada

Our favorite moments from The Zeta Family

Cults are back, baby

On the Venn diagram of my listening preferences, The Zeta Family occupies several circles: It’s got the pacing of a thriller along with plenty of jokes, a storyline about cults, and the vocal talents of (*dies*) Natasha Lyonne. Kevin Nealon and Amy Goodmurphy round out the truly awesome cast of narrators, and the sound design is next-level. As Editor Aaron attests, "Referring to The Zeta Family as anything less than a truly original audio experience would be an understatement." I can’t wait to join the cult when this weird and wild listening adventure debuts this month!

Gretchen Enders is a television writer working in Los Angeles. Her credits include Amazon’s Gortimer Gibbon’s Life on Normal Street (for which she received a WGA Award for Outstanding Children’s Episode), Netflix’s Grace and Frankie and Marvel’s WandaVision (premiering on Disney+). Her other Audible credits include Bedtime Stories for Cynics and More Bedtime Stories for Cynics, hosted by Nick Offerman.

We’re raising the bar on audio entertainment with these original listens produced in the Audible studios.
+More
COLLECTIONS

We have always been drawn to the worst-case scenario in fiction. But why? Research sheds some light.

What listeners say about The Zeta Family

I really liked this! I wish I could find more audio productions like this. Katie and her cast of characters bizarrely grow on you.

I was unsure of this story but it's not bad

it was okay. a solid 7.5 out of 10. it short enough of a good road trip listen. the beginning was a bit iffy but it ended on a heart warming note.

Lots of profanity and a useless narrator. Could have been cute but very disappointing that they substituted profanity and sex talk for a plot. Don’t waste your time.

The narration was fun and different from my expectation. Story was original and entertaining, plus the characters were easy to picture and fun to listen to.

Hilarious! I enjoyed this productuon so much!! I found it very funny. I absolutely loved Natasha as narrator and Amy nailed Katie's characters so well!! Overall great performances by everyone. I felt very immersed in the scenes. FUNNY!!!!

I absolutely loved it! great storyline. The voice overs were very good. I would recommend

This is a really fun story..

This was a fun and interesting story. I found myself thinking about this story alot trying to think about whats happening next. Only complaint i have is, personally i think the narrator's voice is incredibly annoying. I understand what they were going for but ear-piercing voice in my air pods...

Format is great and the story is fun, but...

I love the immersive radio play format and the plot concept was fun. I’m pretty sure the only value added by Natasha Lyonne is that the publisher was able to say that Natasha Lyonne was in the story. Fortunately, that portion is easily avoided with the 30 second “skip ahead” button. All in all, it was worth a listen.

constantly waiting for something exciting to happen... no climax... beginning, boring, and end.. slightly disappointed, but the performance was very good.

the narrators are outstanding. the subject matter interesting. ending could have been a little more intense. overall, a good listen.