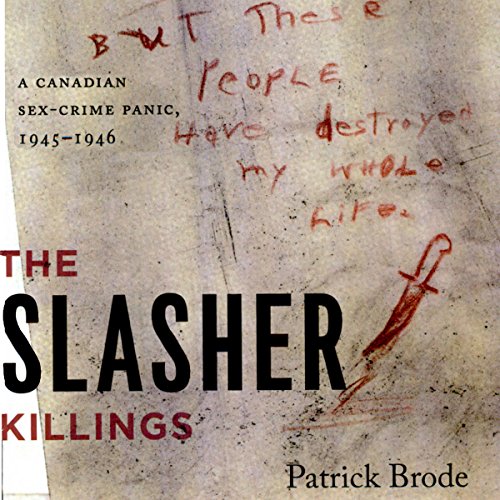 By: Patrick Brode
Narrated by: Joel Allen
Try for $0.00

As the city of Windsor, Ontario, celebrated the end of World War II and the return of its troops with parades and public revelry, the industrial city in the south of Canada was shaken by a series of brutal stabbings. The failure of the police to catch the murderer, a "blood lusting maniac" as the local newspaper described him, the turbulence of the times, and the seemingly random nature of the killings plunged the city into a panic. In The Slasher Killings, Patrick Brode tells the dramatic story of the Windsor slasher, the social frenzy that his attacks created, and the surprising results that this hysteria generated.

By July and August of 1945, Windsor residents knew there was a serial killer living among them and that, despite numerous police roundups, no credible suspect had been found. The following summer the panic escalated when the stabbings began again and, this time, focused on "sex deviants" whom the public and police had decided were at the heart of the problem. Brode examines the vicious press campaign that arose out of the paranoia that vilified drifters, the unemployed, racial minorities, and, finally, sexual outsiders, only further fanning the flames of the growing panic. Brode reveals how the authorities used this hysteria to support their efforts to monitor and control the actions of gay men, a campaign that would be part of the process that led to Canada's 1948 "criminal sexual psychopath" law but would ultimately bring them no closer to the identity of the killer.

"A fascinating case study - it is also a very good read." (Jim Phillips, University of Toronto and editor-in-chief of the Osgoode Society for Canadian Legal History)
"An intriguing look into gay history." (Michael H. Hodges, feature writer at the Detroit News)

What listeners say about The Slasher Killings

the narrator sounds like he belongs on the 5pm tv news broadcast. I couldn't take it anymore 2 hours in.