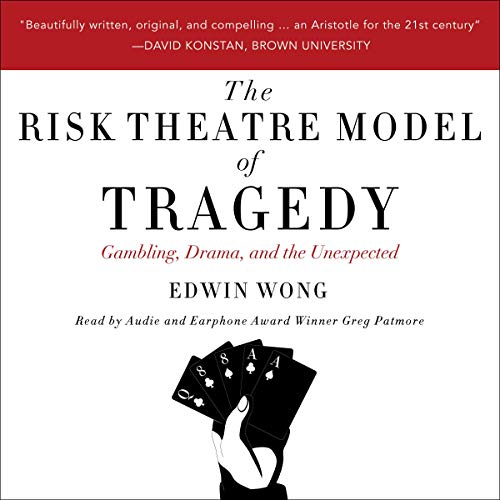 The Risk Theatre Model of Tragedy

By: Edwin Wong
Narrated by: Greg Patmore
Try for $0.00

When you least expect it, Birnam Wood comes to Dunsinane Hill.

The Risk Theatre Model of Tragedy presents a profoundly original theory of drama that speaks to modern audiences living in an increasingly volatile world driven by artificial intelligence, gene editing, globalization, and mutual-assured destruction ideologies. Tragedy, according to risk theatre, puts us face to face with the unexpected implications of our actions by simulating the profound impact of highly improbable events.

In this book, classicist Edwin Wong shows how tragedy imitates reality: heroes, by taking inordinate risks, trigger devastating low-probability, high-consequence outcomes. Such a theatre forces audiences to ask themselves a most timely question - what happens when the perfect bet goes wrong?

Not only does Wong reinterpret classic tragedies from Aeschylus to O'Neill through the risk theatre lens, he also invites dramatists to create tomorrow's theatre. As the world becomes increasingly unpredictable, the most compelling dramas will be high-stakes tragedies that dramatize the unintended consequences of today's risk takers who are taking us past the point of no return.

Risk theatre is inaugurating a new tragic age in storytelling, drama, and literature. Listen to the book that launched the world's largest tragedy playwriting contest (risktheatre.com).

"An ambitious, thought-provoking critique of tragedy in the 21st century." (Kirkus)

"Insightful and compelling.... A bold, inventive new model of theatre through the lens of risk." (Broadway World UK)

What listeners say about The Risk Theatre Model of Tragedy