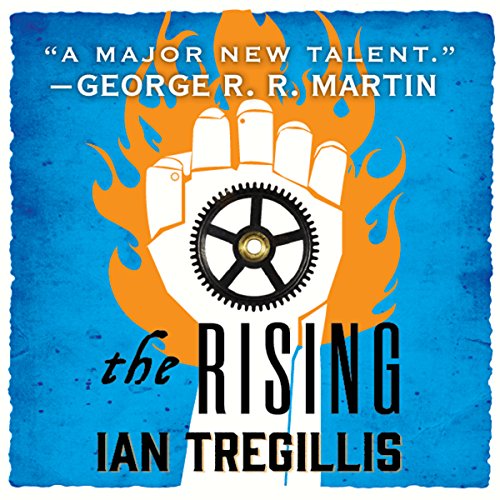 By: Ian Tregillis
Narrated by: Chris Kayser
Try for $0.00

The second book in the Alchemy Wars trilogy by Ian Tregillis, an epic tale of liberation and war.

Jax, a rogue Clakker, has wreaked havoc upon the Clockmakers' Guild by destroying the Grand Forge. Reborn in the flames, he must begin his life as a free Clakker, but liberation proves its own burden.

Berenice, formerly the legendary spymaster of New France, mastermind behind her nation's attempts to undermine the Dutch Hegemony, has been banished from her homeland and captured by the Clockmakers Guild's draconian secret police force.

Meanwhile, Captain Hugo Longchamp is faced with rallying the beleaguered and untested defenders of Marseilles-in-the-West for the inevitable onslaught from the Brasswork Throne and its army of mechanical soldiers.

What listeners say about The Rising

Tregillis balances imagery, action and insight well. He’s a bit heavy on the foul language, though. Kayser is good with distinct voices and tone. He’s a bit slow, though, and mispronounces a few words repeatedly.

Continues the story begun to such good effect in The Mechanical, but I gave it only three stars (versus five for The Mechanical) because there was just too much fighting. Two things saved it for me: first, that the battle chapters alternated with other scenes taking place elsewhere. Second, that the main character in the battle scenes, Captain Longchamp, was highly likeable and the best cusser I have ever encountered in literature. I mean that in the best possible way! if you don't believe me, check out the book's page on Goodreads, go to the quotes section, and read a few of them. Be sure you don't have any liquid in your mouth at the time or you may do a spit-take from laughter.

Is egregious and repeated mispronunciaion a crime?

If you have a French main character with a French name in a book you are being paid to read--maybe learn to pronounce it. It isn't like the two English words "Long" "champ". Jesus Christ! I lasted all of 40 minutes before returning this. Strangely, there wasn't this issue in the recording of the first book with the same narrator.

A truly original story with some of the best and diverse characters ive ever come across. im actually going to listen to this a second time just to hear the dialogue again.

Tregillis' continues his alternative history, steam-punk trilogy with a riveting second installment. Vivid characters are set in a 1920s where steam, horse and hand power has not given way to electricity, but fashioned a world at war with flesh fighting relentlessly against brasswork automated slaves. The Rising depicts Western Civilization as divided between a globe- striding Dutch Empire and a shattered and isolated France in retreat in Quebec and Montreal (identify as "Marsailles in the West"). Against this backdrop, the novel continues to develop its themes of imperial power, war, free will, treachery, sacrifice, slavery, freedom and dignity in a story that uses mechanicals as standings for African slaves whose bodies and talents built and enriched empires as white supremacy perfected a dehumanizing regime of racism intent upon reducing black men and women to mere flesh and blood robots. As this volume ends, Tregillis' metal metaphors have found a way to loose their masters' chains. I can't wait to read the third installment to see how it all turns out. Perhaps readers will find a lesson or two for this reality.

I loved the first book. This one is even better!

The narrator is phenomenal! The characters are so vivid in the voicing and characterization. Such compelling alternate history as a backdrop for a fantasy epic masterpiece. Tregillis is as clever as a Dutch clockmaker when it comes to plot. Can't wait to listen to episode 3.

A riveting series sequel to a marvelous opener

Ian has a unique talent that he flexes at will. Forging relationships and planting them firmly in your subconscious and breathing a life into the character landscape. Again, I anxiously await the conclusion after the breath stealing cliffhanger.

Quite some time ago I had listened to the audio book of the first book in this series, The Mechanical and enjoyed it quite a bit. So going into the second book I was hoping that the series wouldn't suffer from a sophomore slump. Not only did it put my concerns at ease but delivered tenfold.

Can't wait to dive into the next book.

Continuing the storylines of the first book, lots more exploration and development of the characters introduced. After the start of the books, there were not many huge plot developments until the end, but it was an enjoyable ride that did not bore. All the good stuff from the first keeps going. I'll be continuing to the next part.