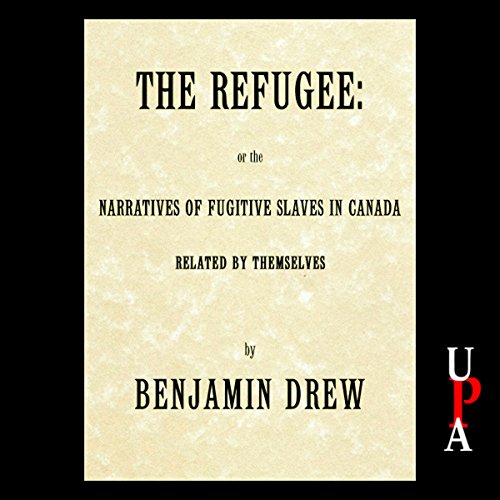 In the early 1850s, White American abolitionist Benjamin Drew was commissioned to travel to Canada West (now Ontario) to interview escaped slaves from the United States. At the time the population of Canada West was just short of a million and about 30,000 Black people lived in the colony, most of whom were escaped slaves from south of the border. One of the people Drew interviewed was Harriet Tubman, who was then based in St. Catharines but made several trips to the US South to lead slaves to freedom in Canada. In the course of his journeys in Canada, Drew visited Chatham, Toronto, Galt, Hamilton, London, Dresden, Windsor, and a number of other communities. Originally published in 1856, Drew's book is an invaluable record of early Black experience.

What listeners say about The Refugee

The book is very enlightening just by virtue of the fact that it is the first hand accounts of actual slaves. But the narrator's "slave" dialect is very difficult to hear. I feel that he missed the spirit of several anecdotes written by former slaves because he tried too hard to make them all sound equally inarticulate and slow. In places it sounds like Forest Gump doing his worst Forest Gump impression. Several of the passages are quite well written and would have been quite a pleasure to hear but for the narrator's insistence on over expressing his assumed lack of eloquence on the part of the subject. It would be best re recorded and read exactly as it is written, even if in broken English, minus the added stereotypical slave affectations, as they do a disservice to the literate slave, rare as he or she may be given the circumstance, who managed to become at least relatively articulate.

There were passages clearly written in a jovial tone of times when the slave felt as though he or she outwitted or otherwise got the better of the slave owner or overseer. They were read with the same slow, sad monotone and the spirit in which it was written was lost.

That being said, if you can look past the messenger, the information itself is fascinating.