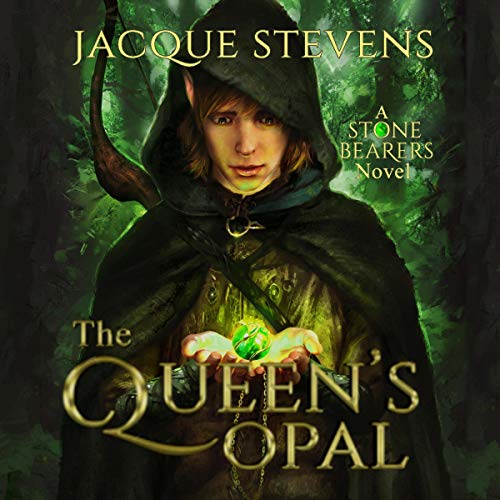 By: Jacque Stevens
Narrated by: John Pirhalla
Try for $0.00

Is the opal a blessing or a curse? This coming-of-age fantasy will appeal to teen and young adult fans of Terry Brooks (Shannara), Cinda Willams Chima (The Demon King), Christopher Paolini (Eragon), and other works of epic sword and sorcery.

Elves never use magic or leave the forest.

They aren’t supposed to get sick either, but Drynn’s mother just died from a mysterious illness, which has targeted the elven queens for generations. With no female heir left, the symbol of the curse - a green stone called the Queen’s Opal - passes to Drynn. Unwilling to lose another family member, Drynn’s impulsive and overprotective brother drags him out of the forest to search for a cure. And the oft-diseased humans seem the most likely place to start.

But the opal isn’t all that it seems. Once outside the forest, it shows Drynn visions of the first queen - a time when the mortal avatars of the lost gods walked the earth and the humans and elves lived in peace. Much has changed in the human lands since then. It’s a darker world, ruled by power-hungry wizards who covet any kind of magic. Magic like the opal. Magic like the natural energy the wizards can see inside the elves.

More than healing one illness, Drynn’s visions call for him to restore the world’s former peace, but if the wrong wizard learns about the elves’ innate gifts, even the forest will no longer be safe.

Family bonds will be tested. Friends will become foes. With two kingdoms spiraling into chaos, can a shy bookworm conquer his fears to bring peace to the realm?

The Queen’s Opal is book one in a new high fantasy adventure series set in the same magical and exotic world as The Stone Bearers (2016).

Clean listen. Fantasy violence and a few darker themes. Recommended for young adults and teens 12 and up.

What listeners say about The Queen's Opal

I love the narrative, and the storyline. So much has been done with elves and I am so glad that the author decided for her characters to do something different...

Story is very entertaining, didn’t want to stop listening. Looking forward to the rest of the series.

This is an enjoyable tale of two elf princes leaving home on a quest to heal their kindred. They struggle to interact with the other peoples with all of their varying motives. The book has great world building!

What a great adventure!

I really enjoyed this wonderful world created by Jacque Stevens. The story starts slow but it picks up and before I Knew it, I was in the edge of my seat stressed out about all that was going on with Drynn & Tayvin.

Narration was well done and fit the characters so well. I could really get into the character’s mind and understand what he was feeling.

This is a major adventure! They leave the world they know to venture into the unknown. There were a lot of stressful situations and I got really worried and stressed out but have no fear because things are always evolving and it will eventually pass.

It was a crazy rollercoaster ride of emotion but the author did wrap things up nicely and did NOT conclude in a major cliffhanger like other books so I was thankful for that. Looking forward to see what happens next!

What an amazing world Jacque Stevens has created! I thoroughly enjoyed getting to know the characters and races, and how they interacted with each other. The characters were dynamic and the plot kept moving, with flourishes of detail and emotion trickled in. It's such a unique story that anyone who enjoys good story-telling should not pass this one up!

And finally, John Pirhalla! What an amazing narrator; he was perfect for this novel. He breathed life into the characters, using different voices for each character and various dialects throughout. I will definitely be listening to more audiobooks narrated by Pirhalla.

The start of the story is a bit slow and seems a bit confused in the perspective switching and introducing certain elements, but the good narration kept me going. Once the foundation is set and we start building into the character elements, the story begins to shine. The elf princes are a bit naive, but I feel this reflects well the isolated and sheltered nature of their people in the world and adds a novel element to the relationships they develop through with the human characters. As they learn when and who to trust and how to control their emotions, there are certain coming-of-age elements, but with a novel perspective.

The narration is excellent, very distinctive voices for all the characters. There is something fantastical about the way the characters are voiced that really helps to immerse you in the story and bring the characters to life.

Definitely excited for the sequel.

I was given a free copy of this audiobook in exchange for an unbiased review.

I was blown away at the amazing world that Stevens created. I loved the interaction between the races (elves, humans) and I loved the way that the brothers learned and grew over the course of the story. The narrator was AMAZING. The voices and timber was fantastic. Five stars!!

This one was so much fun, it's a little reminiscent of Lord of the Rings. Two elf brothers are on a quest into the human lands to try to learn how to break the curse on the Queen's Opal and learn from healers to help save their people. It has dwarfs, magic, elves, wizardry and even dragons. What more can a fantasy lover want in a story? The characters were well developed and entertaining. The narrator did a fantastic job with the voices, acting, and made it simply a lot of fun to listen to. If you like Lord of the Rings, Harry Potter and/or Fable Haven then you'll love this series. I would place this one as a 4th grade and up level read and I am definitely going to have my kids read this book, because I know they'll love it. I am hoping it doesn't take them too long to get book two out on Audible.

The Queen's Opal was a very entertaining Fantasy novel with very well written characters. I was pleasantly surprised I am usually not a fan of books about Elves or at least as main characters but this story was very well done and enjoyable. It had an interesting story and the world that was created by the author was different than many other similar fantasy novels. The story follows to Elf Princes as they leave their forest home and journey out into human territories which hasn't been done in centuries to try to find a cure to the disease/curse that killed their mother. Elves generally don't get sick so they have no knowledge of medicine and want to learn from humans. This is what sets them out on their quest and leads to their many adventures.

That is a very simple synopsis and there is much more to it than even they know. The story is very well written and seems to have a very detailed back story and mythology. The narration and voice work by John Pirhalla is top notch and really adds to the enjoyment of the story.

I very much recommend this story as it has great characters, an intriguing story and quite a bit of action and adventure.

Stevens writes a story that shows how a life can change when we face who we are and what we have to do.

Pirhalla does a good job of creating distinct characters and delivering a good story.

Great story, well written, with enough going on to keep you interested throughout.
A great narrator too. We’ll distinguished voices for the characters, very well read and manages to portray the intensity of the situations really well. Looking forward to hearing more!
This is my honest opinion of a free review copy.