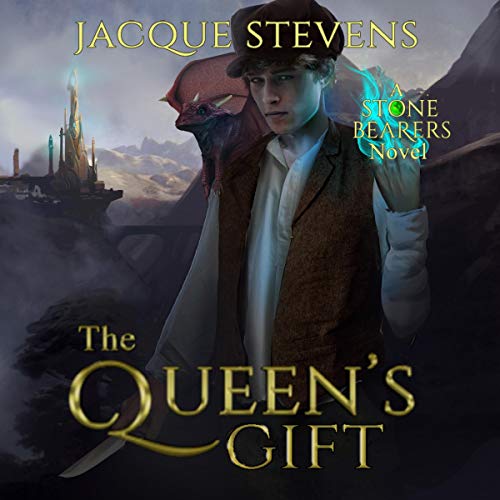 By: Jacque Stevens
Narrated by: John Pirhalla
Free with a 30-day trial

What will he have to become to survive?

It seemed like a simple plan. After leaving his home in the elven forest, Drynn was called as a magical avatar - a bearer. He now wants to learn all about magic and so does his new human friend. Drynn also wants to discover the remaining mysteries behind his mother's curse and so does his elder brother. The human wizards seem ready to help them. Going with them to the Wizard Tower seems the obvious solution.

But even Drynn's most trusted human friend is keeping secrets enough to make the Tower a waiting death trap. If the elves are to survive in the human world, Drynn might have to embrace a darker part of himself - something that could destroy everything he hoped to gain.

The second installment of a coming-of-age fantasy series, perfect for teen and young adult fans of Terry Brooks (Shannara), Cinda Willams Chima (The Demon King), Christopher Paolini (Eragon), and other works of epic sword and sorcery.

The Queen's Gift is the direct sequel of The Queen's Opal (2017) in a new high fantasy adventure series set in the same magical and exotic world as The Stone Bearers (2016).

Clean listen. Fantasy violence and a few darker themes. Recommended for young adults and teens 12 and up.

What listeners say about The Queen's Gift

The more I read in this series the more it hooks me in! I’m really enjoying this series and book 2 is excellent! The characters are so engaging and they grow and evolve so much in this book. Narration was on point and excellent! I could really feel what the characters were going thought. This story keeps getting better and better the more I read. I was still stressed out and in the edge of my seat but the author sorted things out nicely before concluding this second installment. I’m patiently waiting for book three! I can’t wait to see what will happen next. “I was given this free review copy audiobook at my request and have voluntarily left this review”

I really enjoyed this book! I am really enjoying this series! I am patiently waiting on book 3! This is edge of the seat listening, the elves are so different than most. Humans, well they are like regular humans, superstitious fears, self supposing, greedy and all. Jacque Stevens does a fantastic job bringing life to each character in the story which is a desirable trait in any good bard. I was gifted this book and am honored and thrilled to have had the opportunity to rave about it in my own way. I hope others who read this series enjoy it as much as I do.

This book picks up where book one left off and was such a fun listen! The Stone Bearer's series is just my newest favorite fantasy series, it is definitely one I will listen to again. It has elements of some of my favorite fantasies like the magic from FableHaven and Harry Potter and the quests from the Lord of the Rings. The author has done a wonderful job of bringing her story to life with entertaining characters that you connect with and become invested in the story. I absolutely love the narration by John Pirhalla, he does a fantastic job with the voices/acting and really made it a great listening experience. I can't wait for book three. For the parents out there checking reviews, this has been a pretty clean series thus far - I'd say 4th grade and up and movie rating PG-PG13 due to some violence and minor language. I was given this free review copy audiobook at my request and have voluntarily left this review.

Such an Endearing Series

The elements that were captivating from the first book are built upon in this delightful book. The story unfolds within the Wizard's Tower and within the elven forest. Not surprisingly, there is danger brewing in both places. There was much tension as my fear for many of the different character's wellbeing heightened. I enjoyed how the backstory of the human, demon, and elven history was teasingly and slowly revealed through Drynn's visions. I liked getting to know the charming wizards and other people introduced in this book. Kol was still entertainingly brash with such loyalty to Drynn, which I found increasingly heartwarming. The element that I enjoyed most within this book was the very believable surprises that I didn't see coming. There were so many characters that were eventually revealed in a different light than I originally surmised. These revelations were so well done, so interesting, with excellent narration. I loved it! I already miss the characters within this book as I write this review. I look forward to the next in series to be released so I can enter this enchanting world again and see what happens next. I was given this book upon my request in exchange for a review and I loved it!

Book 1 started a bit slow but really kicked in. Book 2 starts off strong right away. I love the characters. Listened with my kids on a long car trip and couldn't wait to head back home so we could listen to the rest, Narration was amazing in both books. So many voices and accents to juggle. Our favorite was the dragonet. No spoilers. Hurry with book 3 please!!

I was extremely excited to continue on with this series, and well... it didn't disappoint one bit. Narration was spot on as usual, and they story was well crafted. Still a huge fan of the characters and I'll be waiting impatiently for the next one. I received this copy as a free copy, but my opinions are my own

Drynn, Cole and Tavin back again

The Queen's Gift is a great second installment in the Stone Bearers series. It starts up right where The Queen's Opal finishes up. Cole is in the Tower to be trained in his Magic, while Drynn is in the tower as a servant to Xavian while secretly trying to learn the magic of the opal and the history of the bearers and elves. Tavin is outside of the tower at the home of Xavian where he is still trying to research a cure for the sickness/curse that killed his mother and he fears will kill Drynn. Cole begins to go to classes and meet new friends including the beautiful Jocelyn and other of Xavian and Arrias(sp?) disciples/students. It is Cole so there are quite a bit of shenanigans and bluster involved there as well as him trying to look out for and protect Drynn especially with the help of Vernak his Dragonling friend. They both begin to trust Xavian and Arrias more as the story goes on and open up to them a bit more. Of course not everything is as it seems and their are friends, foes and adversaries and Drynn has a very tough time deciding what he should be doing all the while learning more through visions of the past queen of what happened back then to the bearers and how the Drow came to be. There is another parallel story happening in the Elven Forest, Kyra and the rest of the elves of Titania are attacked by the Drow and their monsters, Kyra escapes and tries to warn all the other elven settlements but nobody wants to seem to do anything about it. There is a lot going on in this novel and a lot of things are made clear such as the origin of the Drow. The ending leaves you wanting to find out what is going to happen next and should be a perfect setup for the next in the series. The narration by John Pirhalla was spot on again and he did a great job. If you liked the first book this one is must listen and tons of fun just like the first. "Please note I was given this free review copy audio book at my request and have voluntarily left this review."

a continuation from book one which does pick up where book one left off; and a must read and/or listen to.

This review is for both The Queen's Opal and The Queen's Gift. While the story in book one is a little slow to start, hang in there for sure. It'll keep you listening and wanting more. This release continues this great story. Looking forward to next release. I purchased book 1 and requested book 2 in exchange for a unbiased review.

I was given this free review copy audiobook at my request and have voluntarily left this review. I am still beyond impressed with Jacque Stevens' novels as I continue to listen to them. The world-building and character development are phenomenal! If you liked the Queen's Opal, you will not be disappointed with this one. Pirhalla, again, was excellent. His accents and dictation are spot-on, and his pacing and tone keep the story moving along.