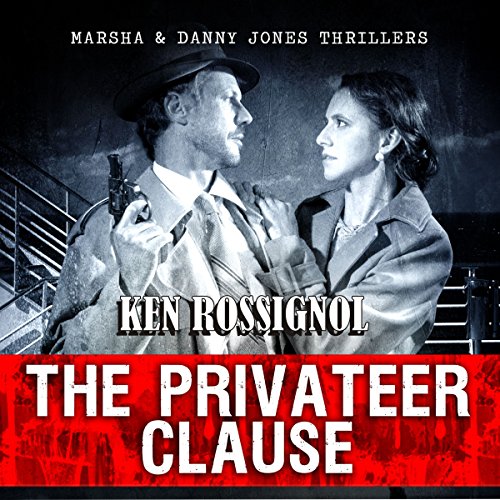 By: Ken Rossignol
Narrated by: Paul J McSorley
Try for $0.00

This is the newly edited second edition, thanks to the courageous effort of the very talented writer and editor - Robert W. Walker - author of over 50 books and professor of English who took on the king of run-on sentences and conquered!

Danny Jones: "My wife just shot our waiter between the eyes when he came in with breakfast! But, he had it coming to him as he had a gun on the tray and was going to give us eggs Benedict with a Glock! Join Marsha and I as we work really hard to protect the Sea Empress and her passengers from threats from every direction. There have been so many shots taken at this ship by terrorists that the cruise line thought their business would sink. That is why we were hired to provide security. Things go so bad that the passengers were taking photos and video and emailing the explosions and hostage scene to CNN and Fox News. Instead of scaring off passengers, bookings for the ship went through the roof. The Seven Seas Company caught the spirit of the passengers and even set up a special for the ship theater with a pirate theme!

Finally, my wife and I needed a break and took a week off to sail on a private charter at the Grenadines and wouldn't you know, two local thugs dressed up as pirates tried to rob us while we sat at anchor for an intimate dinner for two. Well, our cook was great at other things besides her lobster spaghetti."

What listeners say about The Privateer Clause

A great first book in the series!

What made the experience of listening to The Privateer Clause the most enjoyable?

The experience of listening to this book was great. It was definitely a wonderful escape from everyday life for a bit. You felt like you were right there on the cruise ship in the middle of all of the happenings.

I definitely would consider Marcia to be my favourite. I love strong, independent, intelligent women. Danny would be a close second though because I love men who are standing by the side and supporting these women and not unmanned by the woman.

I always love the scene where they figure out the solution to the mystery. I also like when the scene shows where the title of the book came from.

If you could take any character from The Privateer Clause out to dinner, who would it be and why?

I would love to sit out the Capt.'s table with the whole group of characters-Marcia and Danny of course but also the rest and the special speakers giving courses! it would be great to learn everything about what is going on.

This book has an unusual amount of terrorist threats and attacks with an on-site couple on the targeted cruise ship to save the day. It includes details about cruise ships and their operations, a small amount on the assorted backgrounds of all the law enforcement personnel assigned to help and details of fun in the Carribean.

This book grabbed me from the start. It's action-peck with great characters. The narrator did a marvelous job with the various characterizations. There was humor too, right to the end!

not really, just seemed like the author tossed everything in and hoped for the best

Would you be willing to try another book from Ken Rossignol? Why or why not?

the basic story was good, but I think the reader did not do a good job

maybe a different reader, I kept loosing track of who was who.

Did The Privateer Clause inspire you to do anything?