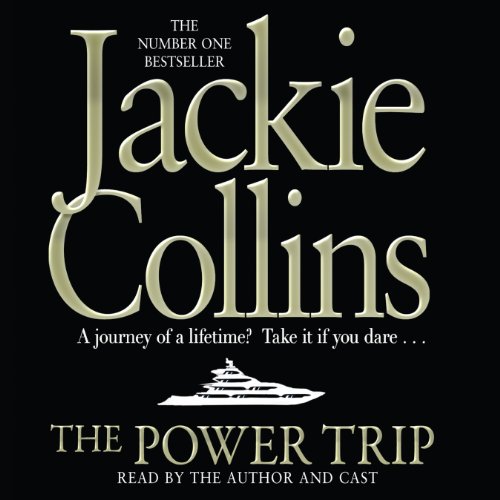 A Russian billionaire and his state of the art yacht. His beautiful and sexy supermodel girlfriend. And five dynamic, powerful and famous couples invited on the yacht's maiden voyage.

A senator and his lovely but unhappy wife. A very attractive movie star and his needy ex-waitress girlfriend. A famous black footballer and his interior designer wife. A male Latin singing sensation and his older English boyfriend. And a maverick writer with his Asian journalist female friend.

Could this be the trip of a lifetime? Or a trip from hell?

Whatever happens on the high seas doesn't necessarily stay there.

The Power Trip - take it if you dare.

What listeners say about The Power Trip

One of the narrator's wasn't great but the rest were great. I hope audible does more Jackie Collins soon as there's very few available at the moment. Can't wait to listen to more!

Dreadful, dull and a waste of a credit


I really gave this a fair crack. I listened for about four hours before giving up. There are too many characters for whom it is hard to feel any connection, interest or sympathy. The story keeps flitting between characters without building a shred of momentum or actually moving the plot forward. With eight hours to go, it still seemed to be in the starting blocks.

Choose something else, this one is a time waster.

An extraordinary and powerful novel! Different blend of characters, with variable personalities, going through the grotesque world, on what power gives them.

Definitely... A chance to escape into the world of the rich and famous. I've always avoided Jackie Collins in the past thinking that all the raunchy bits would detract from the story... how wrong I was!

What was one of the most memorable moments of The Power Trip?

The siege was very exciting but I enjoyed all the characters coming together for the first time.

First time with their narrator.

A great introduction to Jackie Collins. I'll definitely be reading more from her.

What did you like most about The Power Trip?

I liked theglamourous outfits, the splendid locations, and the multi-ethnicity of the characters. It was also interesting to see all the old stereotypes playing out in a way that isn't offensive.

What other book might you compare The Power Trip to, and why?

I would compare this book with Judith cranthes's "Scruples" because of the amount of sex, and colourful languages used. The plot is fast and the characters air more on the fantastic than realistic. though I'm afraid "Scruples isn't on audible. It could also be compared with Louise Bagshawe's "desire" though I feel that desire is a better researched book.

It was nice to hear different voices narrating the story as it fleshed out the characters more. I thought some of the narators were good but I feel that the accents were not necesarily authentic.

There were more thrilling moments than moving moments as the characters were mostly dareing in the pursuit for pleasure or wealth.

This book is movie worthy, and great for entertainment. In order to enjoy yourself, it's best not to think too logically as there are certain aspects of the book that might appear unbelievable. A billionaire like Alexander Kasanyenko is likely to have better security on his Yacht such as sensors and self defence bullets that shoot any boats that approach with out warning. The Pirate invasion could have been a little more action packed. Jackie should research more on modern technology in order to write a more convincing thriller. Still, I'm a great fan of her ideas but they need fleshing out a bit more. I would highly recommend it because once you start reading, you just can't stop till you're finished!

Really enjoyed this novel, it's the first time I've read a Jackie Collins novel and I wasn't disappointed. The only thing I would have changed would have been Flin and Sierra finally getting together at the end but the description for each character was very detailed and I was hooked instantly.

What a thrill!!! Enjoyed every minutes of it

What a thrill!!! Enjoyed every minutes of it. Romance, passion, hot sex, adventure, action... What's not to like

This is the kind if book is happily watch as a movie enjoyed every inch of it thanks Ms Collins you done it again!🥂⭐⭐⭐⭐⭐

This book by Jackie Collins will have you sitting on the edge of your seat. The story is riveting and full of surprises.

loved it ...
this is the second time listening to it and still loved it

It was a truly great story, fabulous narration, a wonderful escape to a fantasy world.