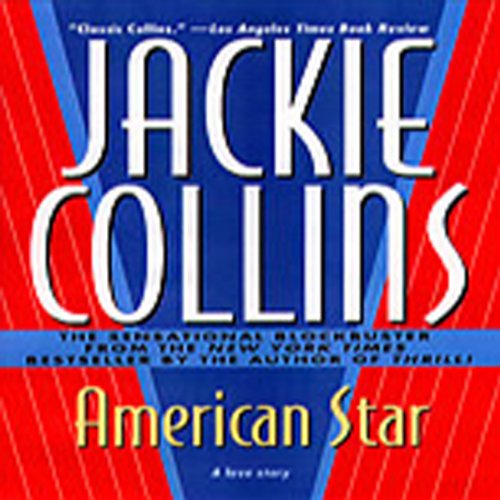 Jackie Collins' American Star is a modern love story. At its heart are two extraordinary lovers, separated by tragic circumstances, yearning for each other, yet seemingly never able to be together again.

Nick and Lauren can never forget each other. Teenage small-town lovers, he from the wrong side of the tracks, she the prettiest girl in town, their love was the town scandal - forbidden, sizzling and unforgettable, ending abruptly in a tragedy that sent them into separate orbits.

Nick pursues his dream of acting, and after a series of wild adventures begins the slow rise that will make him one of Hollywood's biggest stars.

Lauren goes to New York and enters the modeling world, surprising everyone with a career that takes off in a direction she never expected.

American Star follows them both on their trips to fame, as Nick and Lauren, haunted by the secret they share, try to live without each other - only to find they can't. American Star is a compelling story of love, sex, and murder, set against the glamorous backgrounds of New York and Hollywood, as only Jackie Collins can tell it.

What listeners say about American Star

This is and always will be my favorite Jackie Collins Novel. Years ago I went to a library book sale and found a copy of this book I bought it for a whole entire quarter from the moment I purchased it. I couldn’t put it down. I just had to know where the story goes since then I have read almost all of her books seriously was depressed the day I found out she passed but at least there was conclusions to her stories. I have since reread and listened to this book numerous times. It is too the point that I am madly in love with the love story between the two love birds in this book. I don’t think anybody could turn it into a movie that would fulfill all my expectations for the characters as i know and love them. This book is worth reading and listening to for years to come.

Parts of the book were left out which bothered me. But other than that I loved it.

This was a short fiction, very fiction love story. I've been listening to some real intense books so American Star was a refreshing listen. No real plot and seemed to move along rather quickly, not totally disappointed, the narration was pretty good. I needed an easy listen, that being said, American Star served its purpose.