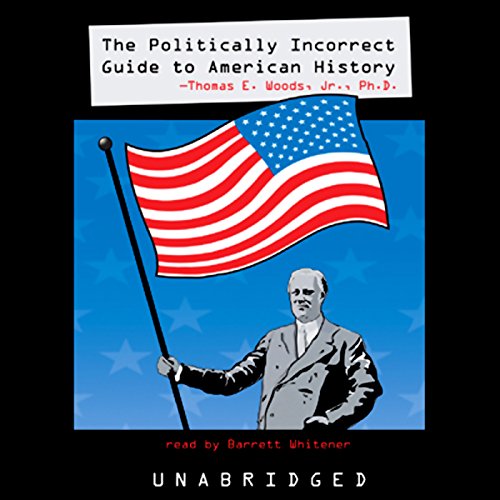 Everything, well, almost everything, you know about American history is wrong because most textbooks and popular history books are written by left-wing academic historians who treat their biases as fact. But fear not; Professor Thomas Woods refutes the popular myths in The Politically Incorrect Guide to American History.

Professor Woods's audiobook reveals facts that you won't be, or never were, taught in school. It tells you about the "Books You're Not Supposed to Read" and takes you on a fast paced, politically incorrect tour of American history that will give you all the information you need to battle and confound left-wing professors, neighbors, and friends.

What listeners say about The Politically Incorrect Guide to American History

What did you love best about The Politically Incorrect Guide to American History?

Woods' use of quotes to show the real meanings and reasons behind some of the big moments of American history.

What other book might you compare The Politically Incorrect Guide to American History to and why?

9 Presidents Who Screwed Up America: And Four Who Tried to Save Her Hardcover
by Brion McClanahan (

What does Barrett Whitener bring to the story that you wouldn’t experience if you just read the book?

His accents are a little distracting. Not really needed for a non-fiction, history book.

If you could give The Politically Incorrect Guide to American History a new subtitle, what would it be?

What you SHOULD have learned in school.

Another enjoyable book by Tom Woods. This really is the "history you SHOULD have learned in school" book. He starts from the beginning of the first European settlers and goes right into the Reagan/Clinton era. Probably the most that I learned was the section on World War I. It is very interesting how war hungry some of the Presidents were and how vocal they were about it. The fact that Woods uses a lot of quotes shows that these aren't just conclusions drawn from connecting dots but letting the actors of history speak for themselves. That's probably the biggest strength of the book throughout. Although there are, at times, conclusions and some assumptions it is balanced with clear moments of history that are there in the open. It's just not clear why you didn't learn about this in school. I also enjoyed the reading suggestions at the end of each chapter. Final Grade - A

Very much written from the southern point of view

If you are a believer in the southern view this books for you. In two hours I couldn’t listen anymore. The only way this could have been worst is if Jefferson Davis wrote it! Then again I’m not sure he didn’t!

Reading the other reviews, I couldnt believe that they bought the same book. One person claimed the book only attacked the "left". That is an absurd lie. In the book, and in general, the author has no issue whatsoever attacking Republican policies and actions.

Great book. Full of facts. I will listen to it 1-2 times more.

So biased I barfed.

This glossed over so much important history it isn’t even funny. American Indians “removed” quick run thru the industrial revolution. All to get to the 20th century so he could bash all the liberal presidents. He inadvertently collaborated a few things I found to be important. So I’ll give him that. But overall l, I could have done with a more balanced history. Some people would actually believe this. He left out so much context. It’s insane.

You learn what they taught you had many parts left out or rewritten to smooth out
the less favorable aspects.
I thought the facts as presented about Roosevelt, the crash of '29 and his struggle to
guide the country through it were somewhat harsh in presentation.
That being said, this book remains a most fascinating listen.

Highly recommended! Not for the faint of heart!

Woods offers a skillful recitation of truth and accuracy of American history. While I can’t say that I agree with every one of the author’s opinions and conclusions presented in this book, I am moved and impressed with the clear and faithful account of the facts. This is absolutely what every American of any age needs to be taught concerning our past. It debunks the inaccurate and incomplete history that is being taught in our schools and pulls together the bits and pieces of our historical background. It would be a great service to teach each and every school child this information. Unfortunately, because most of us are the victims of the public school system, adults as well as children are in dire need of this critical information.

It was pretty good

I love Tom Woods, but I can't necessarily say I loved this book. IT'S NOT BAD, by any means, but it did have a few problems. It jumps around a good bit, with frequent flash forwards, sometimes skipping areas I would've liked to learn about. I'd probably still recommend though. I just think he needs to put out a revised edition.

Where does The Politically Incorrect Guide to American History rank among all the audiobooks you’ve listened to so far?

Shocked about what really happened in comparison to what we've been taught.

This book has loads of information. I gave it a four star because narrator reminded me of a college professor that I had who's voice irritated me. I also don't care for narrators speaking with an accent when quoting someone. He's assuming how people speak. It would have been better had the information seems more organized. It's bits and pieces of American history. Some things were more in depth some where just touched on.

All in all I did learn from this book. However the masses will never believe things that won't fit their narrative; Republican or Democrat.

People that report that Woods is inaccurate need to do their research.

This book provides a fascinating counterpoint to the prevailing narrative and interpretation of American history. Lesser known ideas and incidents are presented, as well as many that are not covered or discussed in popular treatments of American history.

This book should be manditory reading for everyone thinking of voting in upcoming elections. A wonderful - though brutally honest - trip through American politics that helps you understand the truth of our past, the reality of our heroes and where we as a nation have gone both right and wrong.

The history facts you are not taught at school

An excellent précis of American history to modern times - a must read / listen to everyone who wishes to query the 4 by 6 index card if acceptable opinion and knowledge. We need that 2020 update now Tom!

Do yourself a favour, check this out.

I, as an Australian, was thoroughly enthralled with this perspective of US history. The narrator does a rock steady job even accomplishing German and French accents quite well!!

You would think a book about history would be boring, however, I found this quite compelling and even moving at times.

Do yourself a favour, chill out, be ready to have some preconceived notions challenged, and above all, ENJOY.

I would read again.