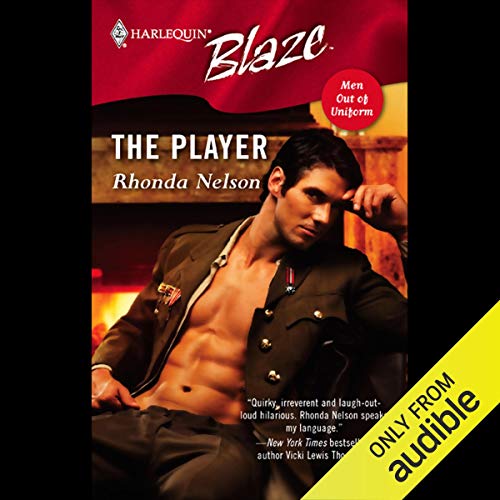 By: Rhonda Nelson
Narrated by: Ian August
Try for $0.00

There's nothing like a man in uniform...or out of it!

Especially when he's as hot as former Ranger Jamie Flanagan. After their last assignment went horribly wrong, he and his buddies needed to get out of the military for good. There was only one catch, that he and his pals promise their commanding officer one favor. Any favor.

Now tall, dark, and sexy Jamie is a top security specialist and the ultimate ladies' man. So he's more than a little surprised when he learns the colonel has set him up to protect his granddaughter. Who would trust a player like Jamie with a gorgeous woman like Audrey? Then he learns his "mission" is to seduce her away from another man.

What listeners say about The Player

On the plus side, the reader was fun. There were few grammatical mistakes and the plot was coherent.

However, the story was absurd, and the book seems to have been written by a tag team. I suggest you give this one a pass if you believe that no book needs the sentence, "An arrow of heat landed in his groin," once, let alone twice. :)

I suggest instead the Linda Howard _Mackenzie_ books.

This is a humorless tale of two post traumatic stress disorders that meet in the night. If you're attracted to wounded he-men and selfless, giving women you might enjoy this tale. You might also be interested if you're uncomfortable with some of the steamier novels in this series as this book is quite tame on that front. If,however, you find the idea of a tortured womanizer who rewards his life saving lady with unimaginative sex unappealing, I would recommend against this selection.

This book never caught my attention. I listened to the end hoping it would get better but it didn't. I think the main problem for me was that nothing really happened to make it interesting. The two characters met and there was instant attraction. And the plotline to add conflict to the story was just silly in my opinion. I also didn't feel much sexual heat between the main characters, which is a major problem in a romance.

I really liked this book - it had a great story and a good romance. To add more insight, my husband and I were on a road trip and I suggested we listen. Of course he protested, but I asked that he give it 5 minutes. Needless to say, he listened to the entire book - way to go Rhonda Nelson!

The narrarator was excellent and made the characters very believable.

I couldn't get through it. The narrator sounds like he's straight from Revenge of the Nerds. I couldn't find anything this narrator said to be sexy or the least bit interesting. I actually thought it was a joke at first... unfortunately, the he talks through his nose and sounds like he's never had a date before so it's hard to get into the story. If only the narrator, the actual plot, or the hot scenes would have been good, maybe it would have been more tolerable - no such luck!

cant even listen to this, sounds like im listening to a book by a robotic talker like when you call a business

Good story line the narrator wasn't that great. I stayed interested because of the characters.

Emotionally stressed Jaime Flanagan is sent on one final mission, except what he doesn't realize is......he is the mission. Light entertainment at its finest, good story to listen to while cleaning the house or yard work.

THE PLAYER GOT PLAYED

Ok, this book, well first of all, coming from a male perspective in a romance was different. However, the characters seemed to be predictable. Secondly, I believe in love at first sight, but you can see the set up. What I liked was the humor between the characters.

What I liked least about the book it lacked imagination on the sexual scene. I know that writers like to use same ole words, but can I missed the fore play. I needed more description.

If you’ve listened to books by Rhonda Nelson before, how does this one compare?

No this is the first time. I would like to hear another one

I thought August performance was interesting. AND his way he read the African American character was a bit steretypical and ghetto. But Funny! I thought it was fun to hear a man read the sex scenes. I was not use to that. Made the scene seem sorta exciting.

It was a pretty descent book for the money......The man narrator wasn't too bad either. Defiently a fantasy book though. Not sure this would really happen in real life, but not to bad of a book.