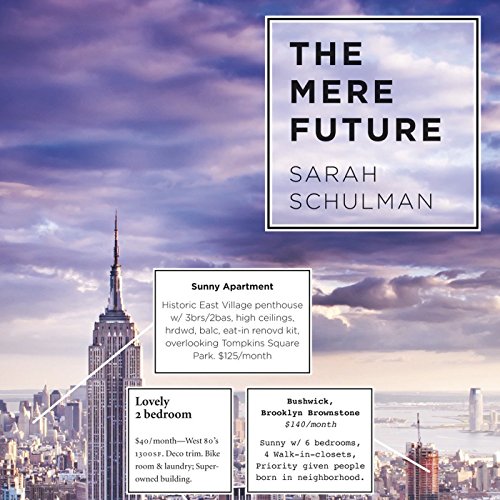 For a nation that elected Barack Obama as president, here is the first novel of the new era: The Mere Future, by award-winning novelist, activist, and playwright Sarah Schulman, set in a utopian (or is it dystopic?) future vision of New York City. The city has morphed into what appears to be an idealized version of itself, the result of what the new mayor calls "The Big Change", in which rent is cheap, homelessness is a thing of the past, and the only job left is marketing. Advertising no longer appears in public but in the privacy of one's home; chain stores and homogenous culture disappear, and a rugged individualism triumphs. Despite the utopian surface, however, there is a disturbing malaise that infects the population; some openly question how the mayor is paying for such measures, which take place at the expense of anyone feeling anything close to art or emotion, culminating in murder and a resulting trial that transfixes the city. Will justice be served under the new Lifestyle-Appropriate Trial and Sentencing System? Sparkling with witty and provocative social commentary, The Mere Future is a startling vision of the world to come that blows literary conventions out of the water. This is Sarah Schulman's 12th novel; her previous books include Empathy, Rat Bohemia, and The Child (all available from Arsenal Pulp Press). Her awards include a Guggenheim Fellowship and two American Library Association Book awards. She is a professor of English at City University of New York (College of Staten Island).

I love Sarah Schulman and this novel doesn't disappoint. It's a satiric look at the future, which pokes fun at the present. New Yorkers especially will find it hilarious. Not as profound as The Cosmopolitans, and I didn't love Schulman's speaking voice. But this left me laughing in the car during my commute, which is pretty good praise.