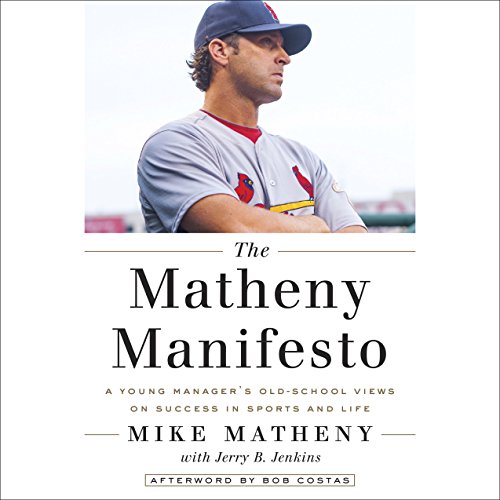 By: Mike Matheny,Jerry B. Jenkins
Narrated by: Mark Deakins
Try for $0.00

"Nothing worth doing right is easy." - Mike Matheny

Mike Matheny was just 41, without professional managerial experience and looking for a next step after a successful career as a Major League catcher, when he succeeded the legendary Tony La Russa as manager of the St. Louis Cardinals in 2012. While Matheny has enjoyed immediate success, leading the Cards to the postseason three times in his first three years, people have noticed something else about his life, something not measured in day-to-day results. Instead, it's based on a frankly worded letter he wrote to the parents of a Little League team he coached, a cry for change that became an Internet sensation and eventually a "manifesto."

The tough-love philosophy Matheny expressed in the letter contained his throwback beliefs that authority should be respected, discipline and hard work rewarded, spiritual faith cultivated, family made a priority, and humility considered a virtue. In The Matheny Manifesto, he builds on his original letter by first diagnosing the problem at the heart of youth sports - hint: it starts with parents and coaches - and then by offering a hopeful path forward. Along the way, he uses stories from his small-town childhood as well as his career as a player, coach, and manager to explore eight keys to success: leadership, confidence, teamwork, faith, class, character, toughness, and humility.

From "The Coach Is Always Right, Even When He's Wrong" to "Let Your Catcher Call the Game," Matheny's old-school advice might not always be popular or politically correct, but it works. His entertaining and deeply inspirational book will not only resonate with parents, coaches, and athletes, it will also be a powerful reminder, from one of the most successful new managers in the game, of what sports can teach us all about winning on the field and in life.

“You win, or in this case, lose, with class.  With integrity.  You play hard.  You play smart.  You respect yourself, your teammates, your opponents, and your craft.  It’s a game and it should be fun.  It’s a business, and those realities are there, too.  But it can be more than just that.  It can, at least for some, be an expression of principles…. In many ways, Matheny’s still new, but already extremely successful, tenure with the Cardinals is an ongoing example of those principles writ large.”
—From the afterword by Bob Costas

“ The Matheny Manifesto illustrates a perspective we need not only in youth sports, but in our culture as a whole. By teaching the importance of respect, character, and a team-first approach, Mike Matheny gives our kids, and those who set an example for them, a positive outlook on healthy competition—and demonstrates how the most powerful lessons of baseball apply to their futures beyond the diamond.”
—Joe Torre

“Readers agree there are ‘must read ‘ books.   The Matheny Manifesto, inspired by Mike's letter is one and much more. After you read it, you ‘must consider’  and then  ‘must act’ on its core principles—principles that benefit coaches, parents, success seekers, and especially young players.”
—Tony La Russa

“I once told Mike Matheny that if I ever became a big league manager, I’d want to manage just like he does.  The Matheny Manifesto will show you why. Mike approaches the game as the ultimate competitor, but totally with class and dignity.”
—Orel Hershiser, Los Angleles Dodgers broadcaster, 18-year big league pitcher, Cy Young Award winner, World Series champion

“ The Matheny Manifesto is mandatory reading for coaches, parents, and athletes of every age. The book is packed with winning insights and practical advice for all to use. A powerful read!”
— Pat Williams, Orlando Magic co-founder and senior vice president

What listeners say about The Matheny Manifesto

If your a youth coach, get this book

Simple: if you coach youth sports up through high school, get this book. It should be the handbook for every youth coach. Great content. Great ideas. The narration was so-so.

Perfect every parent and coach

This is a wonderful book helping all parents reflect on their players sports. Mike reminds us that our parents just cheered at our games and then a DQ. Today, we as parents, including me, think that we are the volunteer assistant coach, from the bleachers.

I have encouraged all of our parents in our Association to read his Manifesto.

Thank you for helping me help my players be better players, sportsman and people. Five Stars!

As a single father of a 12 year old son, lover of Cardinals Baseball, and helping to coach my brother's two sons this year in Pony Baseball (both on two different Cardinals teams) in the Sacramento California area, I was truly inspired by Mike's words. This Missouri transplant to Northern California some twenty-seven years ago, when I was 25 years old, hope that Mike Matheny will become the all time best Cardinal skipper. Huge shoes to fill, I realize. I grew up in Missouri dreaming and striving to be a future Cardinals catcher. Only growing to 5'8" hampered that dream. I hope that I can use the guidance, wisdom, and strength I received from the Matheny Manifesto to be a better Dad and Leader with my son, as well as serving the young athletes I am coaching, their parents, and my "real life" boss and co-workers, as well as my family and God. Thanks Mike. Hope to be fortunate enough to meet you one day.

So wonderful to hear a coach say character is more important than winning. I added quite a few bookmarks. Bouncing back from a serious injury to pursuing integrity and godly leadership makes this a book I will recommend to others.

Great book for coaches & parents of young athletes. the narrator did a good job as well.

Matheny is a prime example of how to lead young men. He does it in baseball but the same principles can be applied in all parts of our lives. Just what this world needs!

can't wait to share many aspects of the book with friends , my kids and my players.

I loved this and needed this so much. Changing my view immediately after being “that Dad” for the last couple of years. Already on my second time of listening to this. Life changing for sure.

meaningful on sonmany levels. Kids and adults are all the same they just want to be recognized and taught. This book give who, what, and why servitude leadership is all about.

A must-read for anyone who wants to coach

This book should be a requirement for Little League and youth sports organizations across the country. Outstanding work that parallels easily to life lessons for anyone, athlete or not.