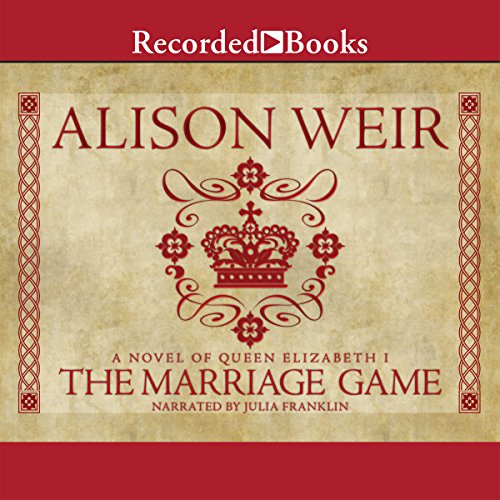 By: Alison Weir
Narrated by: Julia Franklin
Try for $0.00

In this compelling novel of Tudor drama and suspense, acclaimed author Alison Weir brings to life one of England's most scandalous royal love affairs: the romance between the "Virgin Queen" Elizabeth I and her courtier Lord Robert Dudley. Only 25 and newly crowned, Elizabeth vows to rule the country as both queen and king. But her counselors continually press her to form an advantageous marriage and produce an heir. Though none of the suitors have yet worked their way to her throne, the dashing - though married - Lord Robert lays claim to Elizabeth's heart. Their flagrant flirting, their unescorted outings, and the appointment of Lord Robert to Master of Horse inspire whispers through the court, and even rumors that Elizabeth has secretly given birth to Lord Robert's child.

Events take a dark turn when Robert's wife is found dead. Universal shock is followed by accusations of murder. Despite the scandal, Elizabeth and Robert manage to navigate the choppy political, economic, and religious waters around them. But the greatest obstacle to marriage between the Queen and her true love may come not from outside forces, but from within.

What listeners say about The Marriage Game

Not my favorite Alison Weir Fiction

I am a HUGE Alison Weir fan but I was honestly disappointed in this novel. It lacked Weir' s usual passion and suspense. Still worth reading but doesn't compete with "The Lady Elizabeth " or "Innocent Traitor"

Not What I Expected, But..

I finished listening to ALL of the Tudor Queens books. These books took me on quite the journey as I read one after the other, just having finished the 6th book which was released last week. So, I was expecting a novel about the life of a queen. I listened to 'The Lady Elizabeth' and for some reason I was expecting 'The Marriage Game' to be a continuance. It was not.

The Marriage Game is centred around exactly what the title suggests; marriage. It focuses on the many suitors of Elizabeth I. She shuffled them, all the while wanting to be a fierce woman in power, which was unheard of n 16th Century Christendom. The novel celebrates her strength and exposes her weakness for Robert Dudley. Although she was always in love with him and was promised to him several times, they never married during her vast reign.

I didn't like the narrator for The Marriage Game, but it's probably not because anyone else would think she wasn't adequate. I was so used to Rosalyn Landor's lovely voice in every other Weir book I had listened to, and I was disappointed to hear a different narrator.

Overall, had I not listened to the Tudor Queens series, I am sure that The Marriage Game would have been very enjoyable. Weir's writing is superb, and she is a wonderful fiction and non-fiction author of Royal history.

Ok. Would appreciate a but more substance.

I doubt she was the nut the story makes her out to be. How about more history?

Entire book is about Queen Elizabeth 1 playing childish games with suitors throughout her reign.

What disappointed you about The Marriage Game?

One of the primary reasons that I love Allison Weir's books is because a lot of the content is based on historical data. However, 'The Marriage Game' was redundant to the point of boredom. If this was based solely on historical data, a little more fiction could have made it more interesting.

Would you ever listen to anything by Alison Weir again?

Of course, I will listen to Alison Weir again.

I feel that the narrator was overly dramatic at times. Bring back Roslyn Landor!

Still a huge Alison Weir fan. Just not impressed with 'The Marriage Game'.

In The Marriage Game, Allison Weir adds the setting and dialogue to many events in the life of Elizabeth I that are well known to have happened. I learned most of my Tudor history from Allison Weir's non-fiction books on this well documented dynasty. She was writing about them before they became fashionable. I must say that I have enjoyed her more as a historian than as a novelist. In this particular work she presents us with a shrill and somewhat naive Elizabeth who Weir will have us believe still controls the consummate politicians around her. Her eternal suitor, Robert Dudley, is bland and resigned. Cecil is a dotting grandfather. I found nothing tremendously exciting here but the work is entertaining and will provide the lover of historical fiction with his/he fix.

The narrator is ok...sometimes a bit strident but when she does that she is in fact interpreting the character in the way the author seems to have written her. The language and general tenor of the dialogue in this book seems to belong 2 centuries or so after the events actually took place.

Don't stay away on account of this review. As I said, the book entertains and the research in terms of the factual background of the events is excellent. For the "real" Alison Weir, go to her non-fiction books or to her first incursion into fiction "Innocent Traitor" (about the short life of Elizabeth's cousin, Jane Grey).

Would you try another book from Alison Weir and/or Julia Franklin?

The story itself was fine- not great, but I knew what to expect from this author. I would certainly read another book by Alison Weir, but I would NEVER listen to another audiobook narrated by Julia Franklin. She has a very noticeable lisp, which I understand is not something she can control, but I really don't understand how you get a job as a narrator with that being the case.

I'm not interested in reviewing the story, just want potential buyers to be aware of a problem with the narration of this audiobook.

Would you be willing to try another one of Julia Franklin’s performances?

No. As stated, she has a lisp that is extremely distracting to listen to and at times even makes her hard to understand, particularly when she's speaking fast or doing an accent. She would be a fine- not great, but fine- narrator otherwise but I just don't understand how she got this job despite having a pretty pronounced speech impediment.

Book of the Year

I wish Americans would get this book, as it reads like a Tudor adventure story. Alison did a masterful piece of writing on this book, and as good as Stephen Kings recent book, which I consider my gold standard on fiction. This book was enjoyable, and recommend it in the strongest terms.

she is presented as a willful and capricious queen. Other fiction presents her the same. Henry's daughter for sure.

Highly over written and too dramatically narrated

It’s so wordy — repetitive to an extreme. It becomes dreary. The breathy over-acted narration adds to the din. I give it three stars because it may suit romance readers.