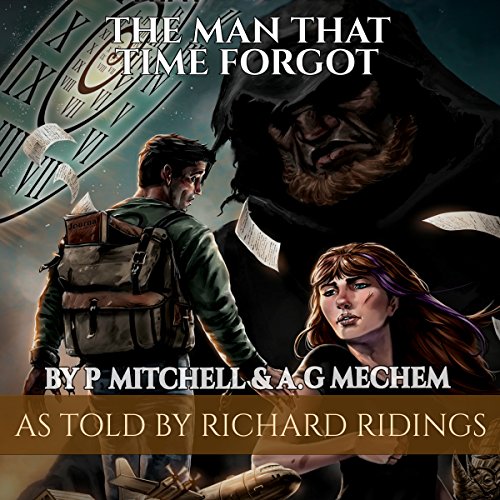 The Man That Time Forgot: Book 1

The Man That Time Forgot: Book 1

Amazon's number-one time travel tale is now an audiobook narrated by one of the world's most iconic voice artists and acclaimed actors, Richard Ridings!

Richard is best known as the beloved voice of Daddy Pig on TV's Peppa Pig. His work on videogames such as Dungeon Keeper and Enslaved: Odyssey to the West have led Richard to receive critical acclaim.

Richard brings a mesmerizing performance to The Man That Time Forgot.

History is a great big lie.

Just open any book or talk to any history professor and they'll tell you that history is filled with nothing but glorious battles, great leaders, plagues, large fires, earthquakes, famous inventors, Egyptians, and Louis Pasteur.

This couldn't be further from the truth. History, in fact, is filled with a whole lot of nothing.

Andrew Adams knows that only too well.

He's an ordinary man living his life in the all-too-abundant and mundane spaces between those great moments. His life follows a daily routine much like that of many others: he wakes up, does the minimum required to get himself through the day - careful not to learn too much or create a lasting impression on anyone - and then he goes back to bed. There's only one ever-so-minor inconvenience that continually stands in the way of Andrew's ignorantly blissful life....

Since before he can remember, every time Andrew sleeps he's randomly flung through time and space, never knowing where or when he'll wake up, clueless to how it all started or how it can be stopped .The only things he can be certain of are that the location he arrives at won't be anywhere exciting, and he'll have to stay there until he loses his fight against sleep.

Andrew Adams has all but given up hope and given up on life. That is, until he meets someone like him.

Where does The Man That Time Forgot: Book 1 rank among all the audiobooks you’ve listened to so far?

My first audiobook! I loved the narration by Richard Ridings.

I like the clever story and the sarcastic tone.

What does Richard Ridings bring to the story that you wouldn’t experience if you just read the book?

Richard Ridings makes the characters come alive and adds to the sarcastic tone of the narrator and main character.

If you could sum up The Man That Time Forgot: Book 1 in three words, what would they be?

The mystery of where he came from and why his time jumping is different.

What does Richard Ridings bring to the story that you wouldn’t experience if you just read the book?

Like in my headline, Richard Ridings does not just read the story he acts it out. I see not just hear the books conversations.

If you could rename The Man That Time Forgot: Book 1, what would you call it?

One of the best time traveling books I've read/listened to. Reminds me of hitchhikers guide to the galaxy.

Where does The Man That Time Forgot: Book 1 rank among all the audiobooks you’ve listened to so far?

Would you be willing to try another book from Alan Mechem and Paul Mitchell ? Why or why not?

Yes, depending on who read it.

Which character – as performed by Richard Ridings – was your favorite?

All, he really brought them to life. You knew right away who was speaking.

This was a pure historical scifi book. Not for light readers. Loads of history and science. You really have to pay attention to keep up, but worth it. The reader made it easy to pay attention, awesome voices and character realization. Even if the story lost me, that voice kept me engaged.

A good take on the time travel genre. Looking forward to the next book. Good narrator.

The overall story is good but gets to the point slowly. The narrator makes a lot of annoying mouth noises like lip smacks, it really distracts you during listening.

What a great read!

Would you listen to The Man That Time Forgot: Book 1 again? Why?

Absolutely! Loved the narration and there were enough twists and turns in the story to make it worth reading again to catch everything. Loved the bits of humor!

What other book might you compare The Man That Time Forgot: Book 1 to, and why?

The time travel is different from others I have read. Andrew is not your typical time traveler, looking to explore or try to change history. He is a reluctant traveler, bouncing from time and place without understanding why it is happening to him, just trying to survive each day.

Have you listened to any of Richard Ridings’s other performances? How does this one compare?

I had only seen Richard's acting performances before, but his voice and talent makes him the perfect narrator. He brought the story to life! I will definitely be watching for more of his narrations in the future.

Don't want to give away any plot points. Love his slow realization of all he was missing by only focusing on surviving the day.

This one is absolutely worth the listen!

A different take on time travel.....

What other book might you compare The Man That Time Forgot: Book 1 to, and why?

It reminded me of Heinline's "job" but it's a bit different.

What does Richard Ridings bring to the story that you wouldn’t experience if you had only read the book?

His voice and way he can convey feelings and tones made the book come alive for me, I honestly can say that I enjoyed it more with narration than I did reading the paper copy.

I have never read a book with this type of time travel before, it is a page turner once you become absorbed in the story. The beginning has to be told to set the story. Imagine every time you sleep, time-traveling to a new place. How do you eat, have shelter, provide your clothing? What if you jumped into the middle of any unsavory part of history? Just thinking about how life would be is unsettling.

5 stars all around.
The story is compelling and well written. To the point where I'm going to track down a paper copy for my personal library.
Richard, what can I say? He has a lovely voice and is a brilliant narrator. You ever get that one audiobook where the narrator mispronounces things and it drives you crazy? Mr Ridings doesn't do that. If I could invite him to tea I would.
I recommend this file to anyone.

Overall, great. IF you last past the slow start<br />

Slow start. then turns great, very exciting. But, disappointingly does cop out the the end a bit.

However, narrative from Daddy Pig is Ab fab. And it reflected in my rating.

Fans of Douglas Adams will love this. A clever twist on the time travel genre. With an elegant turn of phrase and crammed full of wonderful details like skeptical hippies, boozy old priests and exploding Rhinos. But it's not just funny dialogue, there are also some beatifully written scenes from all across history, especially the sequences in the Polish Ghetto during WWII. It's a story you have to keep listening to, made even more addictive by the real ale tones of the wonderful Richard Ridings. This is a real treat. Recommended heartily.

Time travel, excitement. humour, brilliant story, fantastic narration, ooooh and time travel, time travel and more time travel. Loved it from the first few words, all through to the last sentence. Perfection in a book for me - can't wait to see if the story is to continue to another book... a series... and if it is I will be pre-ordering.