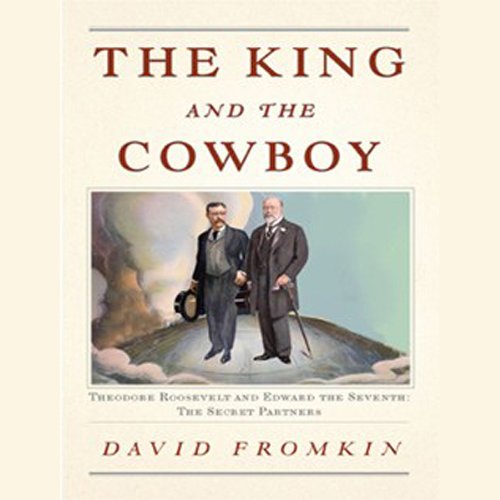 The King and the Cowboy

The King and the Cowboy

In The King and the Cowboy, renowned historian David Fromkin reveals how two unlikely world leaders---Edward the Seventh of England and Theodore Roosevelt---recast themselves as respected political players and established a friendship that would shape the course of the 20th century in ways never anticipated.

In 1901, these two colorful public figures inherited the leadership of the English-speaking countries. Following the death of his mother, Queen Victoria, Edward ascended the throne. A lover of fine food, drink, beautiful women, and the pleasure-seeking culture of Paris, Edward had previously been regarded as a bon vivant. The public---even Queen Victoria herself---doubted Edward's ability to rule the British Empire. Yet Edward would surprise the world with his leadership and his canny understanding of the fragility of the British Empire at the apex of its global power.

Across the Atlantic, Vice President Roosevelt---the aristocrat from Manhattan who fashioned his own legend by going west to become a cowboy---succeeded to the presidency after President McKinley's assassination in 1901. Rising above criticism, Roosevelt became one of the nation's most beloved presidents.

The King and the Cowboy is an intimate study of two extraordinary statesmen who - in part because of their alliance at Algeciras - would become lauded international figures. Focusing in particular on Edward the Seventh's and Theodore Roosevelt's influence on 20th-century foreign affairs, Fromkin's character-driven history sheds new light on the early events that determined the course of the century.

This is not Fromkin's best work. Though he purports to show the importance of the relationship between Edward VII and TR, much of what transpired was out of the hands of either. The author spends a great deal of time on the king's sex life, which would have made an interesting book on its own; here, it seems gratuitous. The king was well-traveled and cosmopolitan, yes. He knew lots of women. What about the diplomats he knew? The politicians at home? What were his political views? The TR section is pretty thin and mostly well-known.

As for the narration: Is there not a single soul out there to check the pronunciation of these narrators? Non-English (and some English) names and terms don't have a chance. Gare de l'Est, chaparral, hegemon get massacred. Even the king's last mistress's name, Keppel, has the accent on the wrong syllable.

Although the narrator has a pleasant voice, he often doesn't seem to have read passages in advance so that he would know where to put stresses. Instead, he affects a sing-song phrasing that's mind-numbing. With no clear pattern, he occasionally takes on a foreign accent to read quotations. This would be comical, possibly, if it were consistent, though this is not a comic read.