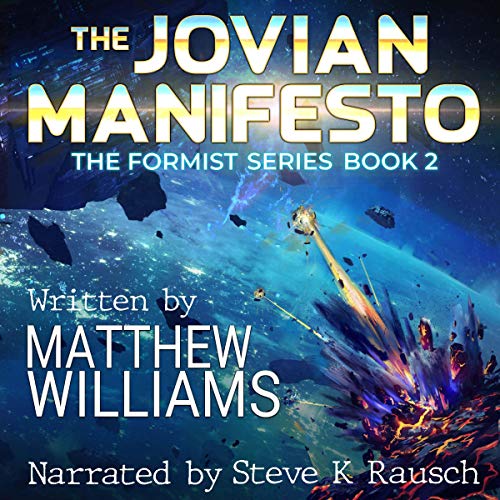 By: Matthew S Williams
Narrated by: Steve Rausch
Try for $0.00

Months have passed since the incident on Titan. For Emile and the Formists, life is returning to normal now that their enemies have been dealt with. Or so they thought.

On the Jovian world of Europa, a mysterious document has been released that threatens to reveal everything. The Jovian Manifesto, as it’s called, has the Outer Worlds up in arms and the Inner Worlds fearing a civil war.

The Solar System is on the verge of ignition, and all that is needed is a spark.

The Jovian Manifesto is recommended for fans of The Expanse.

What listeners say about The Jovian Manifesto

Better than the original

Listening to a book instead of reading one, while using the same areas of the brain, can be entirely different experiences. So was this book, which I enjoyed anew in audio, and found more exciting as well. Mixing gun battles with deep-space politics and travel and touches of cyberpunk, this is a great follow-up to the original, and is worth a download.

The Solar System is on the verge of ignition, and all that is needed is a spark.
I really enjoyed this book lots of twist and turns through out the book

A great many twists and turns

This book is the second in the series. It continues when an inspector is sent to determine what occurred and who had released the manifesto that shocked the entire solar system. It seems that the solar system is full of many competing factions what want to kill the inspector. At the same time they discover some allies while the authorities are trying to do mass extermination of dissenters. The book is one continuous series of near death experiences where the inspector must not only survive but try to discover the truth.

The narrator did an outstanding job of presenting the story with the various characters having individual voices.

This book was provided free of charge and this review was freely given.