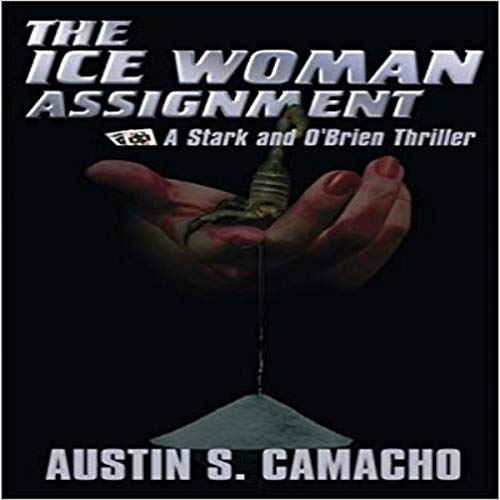 By: Austin S. Camacho
Narrated by: Nicholas Patrella
Try for $0.00

Morgan Stark, a retired mercenary soldier and Felicity O'Brien, a retired jewel thief operate a security business. Stark and O'Brien have a special gift - a psychic link that alerts them to danger. Their newest case involves a drug called Ice and a Columbian group known as the Escorpionistas. The leader of the Escorpioistas, a woman known as Anaconda, has a secret weapon: clairvoyant brothers who are able to alert her of the threat that Stark and O'Brien will pose before it happens.

After one of Anaconda's psychics escapes her control, the heroes dodge killers from California to Texas while following the clues that lead to discovering how the Ice is getting into the United States. The battle intensifies as Stark and O'Brien take the battle to Colombia, where they face the killers head on and risk their own lives trying to find answers.

What listeners say about The Ice Woman Assignment

Fun adventure with stark and o'brien

this was a great adventure. the antagonist is unique and the story was intense.
I'm looking forward to more stark and o'brien novels

I received this audiobook for free in exchange for an unbiased review.

I've read a couple of this series they were both good books., and this is the best it is action packed and gripping from beginning to end.
Highly recommend it.
I received a free copy of this audio book at my own request and voluntarily leave this honest review..

Intense. Stark and O'Brien take an assignment from the CIA after the FBI tanked on the job of stopping the new cartel bringing the drug ICE into the US. This job is the toughest they've had to date, and the one that cost each of them and turned it into a personal feud.
Voice actor Nicholas Patrella did a wonderful job with all the voices and really acted out the story and did not just read it. His voice brings the characters to life with His inflections entirely suited the situations and characters.

"The puma and the hawk."

The security team partnership of Morgan Stark, ex-military, and Felicity O'Brien, former jewel thief, is enhanced by a near psychic awareness of each other and of present danger, making them good at what they do, very good. Perhaps the best. But when they take on a new job at the request of a friend, they find themselves out of their league. A new drug, ice, has started to appear on the streets and their job is to track how it is being distributed; but the leader of the Columbian Cartel, the Escorpionistas, has powers of her own...

Action packed from chapter one, this book is a thrill ride but also one filled with emotion right to the end. These are characters, perhaps flawed, but to care about, and feel for, in their troubles and losses. Narrator Nicholas Patrella further enhances the reader's involvement with his fast, almost hypnotic performance. Rhythmic, emotional, and giving individual voice to the different protagonists, he clearly carries the author's well developed scenes as pictures to the mind. Only one slight discrepancy: Felicity, with her vibrant red hair, is distinctively Irish with an heavy accent, but Mr.Patrella's reading gives little indication of this. Far better, however, to offer, as he does, a mere trace of her national speech patterns than give a poor, heavy handed approximation that would leave the reader mentally screaming. Excellent choice, Mr.Patrella.

The Ice Woman Assignment is an excellent entangled and emotional thriller, fast moving, engaging, visual and full of action but without detail overload and, as such, highly recommended to readers enjoying this genre. My thanks to the rights holder who, at my request, freely gifted me with a complimentary copy via Audiobook Boom. I expect that I will think back on this story for some time to come and I am tempted now to read the earlier Stark and O'Brien books by author Austin Camacho.