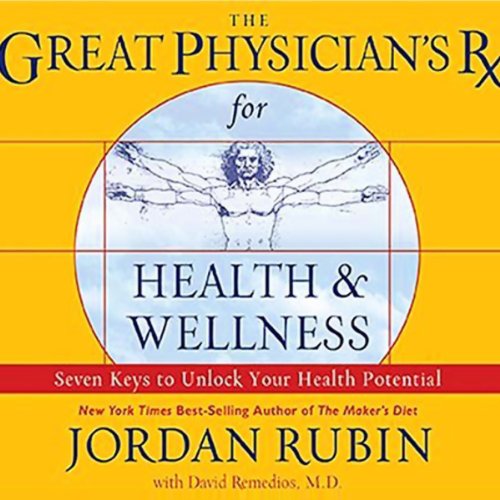 The Great Physician's Rx for Health and Wellness

At 19 years old, Jordan Rubin was a healthy 6'1" and 180 pounds. Shockingly, his weight fell to just 104 lbs. in a matter of months. His immune system was at an all-time low, as he suffered from Crohn's disease, food allergies, anemia, fibromyalgia, intestinal parasites, and a host of other conditions. After seeing over 70 health professionals, using both conventional and alternative medicines, Rubin was sent home in a wheelchair to die.

But his story didn't end there. Through determination and a powerful faith in God, Rubin refused to give in to disease. Instead, he educated himself on natural health (eventually becoming a doctor of naturopathic medicine), and applied its principles. Now, 10 years later, Rubin is fully recovered, and he desires to share the keys to his own good health. These keys aren't just for the disease-ridden; they are for anyone desiring to live an abundant life of health and wellness.

Very informative and I really loved the narrator. I enjoy it more when the writer is also the narrator of the audio book.

Great audiobook. I read the maker's diet from him and this is essentially the same thing but it is great info. It is very motivating and educational. I advise you to get this and pick up one of his books.

Love this book! Will definitely listen to it again! such sound advice and interesting format of information.

Spirit and health being!

Author delivers packed content rooted in spiritual well being and healthy living. Well worth your time.

It's more about Jesus than about nutrition

Felt cheated after completing this, as I had not expected this to be so much about God. The nutrition angle seems like a secondary thing here, but it does offer good enough advice on food and general health, but nothing spectacular.