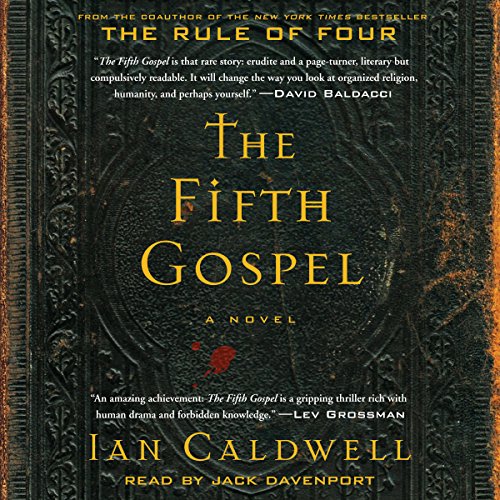 By: Ian Caldwell
Narrated by: Jack Davenport
Try for $0.00

Now, after a decade of painstaking primary research, Ian Caldwell returns with a new intellectual thriller that confirms his place among the most ambitious popular storytellers working today.

In 2004, as Pope John Paul II's reign enters its twilight, a mysterious exhibit is under construction at the Vatican Museums. A week before it is scheduled to open, its curator is murdered at a clandestine meeting on the outskirts of Rome. The same night a violent break-in rocks the home of the curator's research partner, Father Alex Andreou, a Greek Catholic priest who lives inside the Vatican with his five-year-old son. When the papal police fail to identify a suspect in either crime, Father Alex, desperate to keep his family safe, undertakes his own investigation. To find the killer he must reconstruct the dead curator's secret: what the four Christian Gospels-- and a little-known, true-to-life fifth Gospel known as the Diatessaron--reveal about the Church's most controversial holy relic. But just as he begins to understand the truth about his friend's death and its consequences for the future of the world's two largest Christian Churches, Father Alex finds himself hunted down by someone with vested stakes in the exhibit--someone he must outwit to survive.

At once a riveting literary thriller, a feast of biblical history and scholarship, and a moving family drama, The Fifth Gospel is a novel about the depths of sacrifice and the power of forgiveness. Rich, authentic, erudite, and emotionally searing, it satisfies on every level.

What listeners say about The Fifth Gospel

A Necessary Review of a Masterpiece

I have neither written many reviews nor read many. At times it seems futile. I've always found it simpler to read the summary to see if I'm interested and see how many people enjoyed the novel by checking out the star breakdown.

I broke habit with this novel and I saw some ludicrous things. No review of this novel should include any comparison or even mention the name Dan Brown (I am hypocritical in order to make a point). There is nothing about this novel that resembles any work Dan Brown has ever done. Sure this is material that would fascinate Brown, but this novel provides a different type of magic.

I love Dan Brown , he's my favorite airport author. I'll grab his latest before boarding and travel on the edge of my seat.

But Caldwell is no airport novelist. His novels especially this one are cerebral, packed with adjectives and emotion. The religious conspiracy is actually the secondary topic. This is a novel primarily about complex family relations. A father and son, an uncle and nephew, an abandoned husbands attempts to cope with the reemergence of his wife and his sons glee, and more than anything its about two brothers.

There is no basis for comparison. This is a novel I had to work through along with the fantastic narration because there was so much more to it than I expected. Why?? I read reviews that prepared me for a Brown like novel. This like Caldwell's other work was so !such more.

If you like to peek into the cloistered world of the Vatican, you will enjoy this book. It tries to include a bit of a mystery (murder?) but falls quite short of creating much suspense. Nevertheless, it is the story of the Pope, two brothers of the faith and the unveiling of a newly found "fifth" gospel -- not written by Matthew, Mark, Luke or John. What I found interesting is the telling of how and when these New Testament books were written and why they differ, sometimes significantly, in what is included and described. Learning the difference between factual gospels and theologic gospels was worth the listen.

The narrator is great and the story, while getting a bit wayward at times, is good -- or passable as good in this genre.

Ian Caldwell is definitely a better writer than Dan Brown. He creates here a Vatican that breathes reality, and a Church that is rich in its beliefs and in its complexity. The characters have sincerity and could inhabit such a rarefied atmosphere. Church officials are especially well drawn and there are moments of great feeling.

Also, this is one of those books that takes you immediately to reviews of the work, details of the author's research, and wikipedia - loved being introduced to ancient manuscripts, unfamiliar branches of the Catholic Church, and new "evidence" about controversies like that surrounding the Shroud of Turin.

But there's no denying that there is much of the "deja vu" feeling about "The Fifth Gospel." Intriguing and thoughtful it may be, but it has been done before.

So a recommendation here is tricky. If you like religious and literary mysteries (with or without the conspiracy theories), then I'm pretty sure you'll like this. I went along quite willingly with the story and with the really wonderful narration of Jack Davenport.

This is a new book, zero ratings and usually I like to wait too see what others say about a book before I pull the trigger. I'm sort of a book follower you might say. But I loved this story, great mystery topic about the Catholic church that doesn't have anything to do with little boys. Well researched historical information. Almost had me reading the Bible again to check the details. Almost they told me enough to be curious about how it was written at least and that wasn't the motive for the story. It has you sailing back and forward into history and modern times. I'll probably look for more from this Author.

I've read some reviewers comparing this in some way to The DaVinci Code, but I don't know why.......This is a much better written book, with tangible characters and without a conspiracy theory. Well, OK, there might be a bit of a conspiracy in there, but that's really not what the book is about. It's really about two brothers, both priests, who are differently but emphatically involved in a murder and a secret involving an upcoming exhibit about the Shroud of Turin at the Vatican. Most of the book takes place in the Vatican, but it's not just a holy city, but a city of commuters, line ups at gas stations, and every day occurrences like trips to the grocery store. The people involved are real people, not just religious officials, and that makes the story all the more engaging.

And, I learned that not all Catholics are Roman Catholics. I never knew that before.

Knowing nothing about the story, I was intrigued from beginning to end. Being Catholic, I enjoyed the in depth touring of the Vatican as well as the story.

"The Fifth Gospel" is intricate, breathtaking and tightly woven with well developed characters. This is the book Dan Brown could only dream of writing. It has all the depth with none of the cheap thrills.

I really enjoyed listening to the Fifth Gospel. My first Ian Caldwell book. The story moves along at a good pace and I found myself not wanting to stop listening. The narrator is very good. Definitely worth listening to. Enjoyed the historical aspects too. J

... but you can expect an excellent book. Ian Caldwell's novel concerns family, faith, friendship and more than a little internal conflict about the importance of doing the right thing. It's also about just what constitutes the "the right thing" in the first place. A death lies at the center of the story but it's not an action-packed thriller or a Dan Brown-like puzzle to be unravelled at a breakneck pace. However, it is compelling and it's setting and characters are fully-realized.

Jack Davenport does a superb job as narrator. His performance is among the best I've encountered over years of listening to audiobooks.

Very Interesting story. Well written and narrated.
Definitely credits well spent.
I learned things about the Vatican that I did not know.