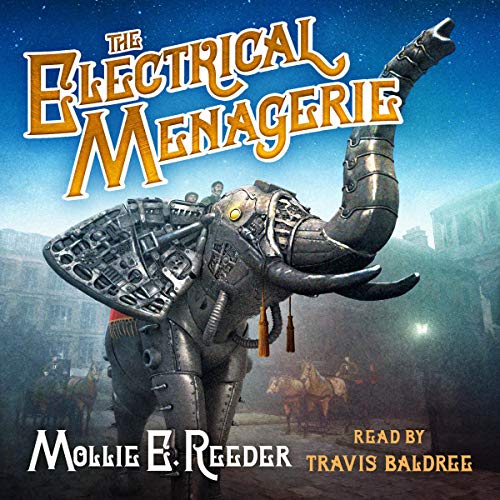 By: Mollie E. Reeder
Narrated by: Travis Baldree
Try for $0.00

To save their show, Carthage and Huxley risk everything in a royal talent competition, vying for the once-in-a-lifetime chance to perform for the future celestial queen. In this stardust- and spark-powered empire of floating islands and flying trains, the Electrical Menagerie's bid at fame and fortune means weathering the glamorous and cutthroat world of critics, high society, and rival magicians - but with real conspiracy lurking beneath tabloid controversy, there's more at stake in this contest than the prize.

Behind the glittery haze of flash paper and mirrors, every competitor has something to hide...and it's the lies Carthage and Huxley tell each other that may cost them everything.

What listeners say about The Electrical Menagerie

This book was given to me for free at my request and I provided this voluntary review.
I was sold by the title and cover. Who wouldn’t want to enjoy the wonder of steampunk circus? The story started with a classic “we have to save the show” storyline and I was happy enough for that to be it.
This story did so much more! Each stage of competition brought out new sides of the characters and their back stories. Chekov’s guns were set up so well I didn’t see them coming.
Mystery and intrigue! Sabotage! Showmanship! And a truly epic conclusion.
Travis Baldree did a fantastic job. He nailed the various characters and accents – including making me care about a certain automaton.
There was peril but I think anyone middle school age and up could handle it. Anyone who can still remember a sense of childlike wonder at their first magic show will treasure this story.
I look forward to re-reads in the future and hopefully more stories in this world.

The Show Must Go On

The story is quite magical, both in the story it tells and the feeling it gives you. You get the feeling of the old traveling circus with some futuristic upgrades. I don’t really know what steampunk is but this definitely worked. Throughout the story there is always a little something that adds some fantasy to the overall world and the storyline itself. Reeder does a really good job establishing her world and I enjoyed listening to her descriptions of everything. She definitely has a way with words.

The two main characters, Carthage and Huxley, are a great duo and play off each other really well. It was like listening to two long time buddies while they reach for the stars, even though they aren’t quite friends. The development of each was done really well and often I got wrapped up in who they were versus what they were doing. I definitely look forward to more of this duo on their magical journeys. Not sure how this fits into the historical fiction category, I would call it more of a science fiction mystery. This had a few different mysteries that unfold throughout the story and the one that was the most touching was Carthage’s family mystery.

Travis really knocked the narration out of the park for this. This story really allowed him to show his full range of character voices and accents. You can tell he really enjoyed narrating this book as his enthusiasm really brings the entire story to life. His narration paired with the fun dialogue really brought out all of the character’s emotions. It really sounded like he was acting out the story versus just reading it.

This book was far more than I expected. I wanted to read it based on the cover alone and I’ve been looking for something similar to a certain book about a circus I fell in love with last year. I was not disappointed. Ms. Reeder provides a great back story for each of the characters that is slowly revealed over time. There was an unexpected mystery and twists and turns that kept me engaged from start to finish.

Mr. Baldree provided wonderful narration with different accents and voices for the characters, including the speaking electricals, which made it very easy to follow.

I look forward to reading more in the Celestial Isles series and I hope that this duo continues their work together.

As Magical as the Circus!

Initially the cover grabbed me on this book. I love elephants. Then, I read the synopsis. It grabbed me. The only thing I was not sure about was the steampunk aspect. I am very hit or miss with steampunk. I would categorize this book as steampunk, fantasy, and mystery. I was captivated pretty quickly.

The two main characters Carthage and Huxley each bring their own unique skill sets to their failing circus. They hear about a competition and decide to enter it. Once they have made it into the competition someone starts trying to sabotage, in order to win.

With where Carthage and Huxley's relationship seemed to be in the beginning I was not quite sure how the story would play out. I loved how their relationship grew and how they were their to support each other. It shows that friends fight and disagree, but what really counts is are they there for you when you need them.

This books is a fun mix of many things I love the circus, nods to the Victorian era, mystery/fantasy, and an ending I was not fully expecting. This was mostly because I was still questioning the relationship between the two main characters.

It looks like this book will be a series. The only thing to say with that is, I hope there is a little more world building in the second book. I want to explore this work so much more. That being said, I really cannot wait for the next book to come out! I will be listening to this book again and again. It is a new favourite.

Travis Baldree's unique voice lends itself to this world. I quite enjoyed his narration and I hope he will continue on with the series.

I was given a copy of this audiobook at my request. I have voluntarily left this review.

This was the second time I have made the journey through the Celestial Isles, and hearing it made the trip such a magical experience. Travis Baldree did a wonderful job voicing all of Mollie’s characters. I cannot wait for the next installment of the series!

The Electrical Menagerie by Mollie E. Reeder and narrated by Travis Baldree is an audible book I requested and the review is voluntary. This was a fresh change from what I had been reading. I love steampunk and this was excellent! Adding in a circus feel, the steampunk, and then murder, and more, it took this novel over the 'big top'! Loved the characters, especially one of the "electricals". Plot and twists kept the story rolling.
With Travis Baldree as narrator is was bound to be good! Excellent voices and emotions! Great job!

The book was good then it got better.

This story is of a unique aesthetic. Steampunk meets carnival sideshow, meets classic southern hospitality. It's hard to place for a reason. It's unique world building is in a galaxy away but so familiar that you'll find yourself trying to place it. Both nostalgic and imaginative.

The characters are every bit as developed as the world. Carthage and Huxley get on each others nerves and they both have secrets. I loved getting to know them.

Having read this before, I already knew this story was amazing. But then I heard the narrator speak in Carthage's voice. He got the Scottish accent perfect. In fact he got every voice perfect. It was like listening to an audio drama. How one man can do so many voices will never ceases to amaze me.

I had never heard of the offer before this book. I did not know what to expect, but I was very pleasantly surprised. Wonderfully imaginative book with great characters, plot twist, and just enough sci-fi fantasy to make it really interesting. Can’t wait for the next book.

I don't usually read books like this, but I was hooked instantly. These characters are so real and the reading is phenomenal.

What a magical, enchanting and charming story!! I could not put it down until the end.

Here, there is a contest with the winner getting to perform for royalty. If Carthage, the creator of the Electrical Menagerie, can win this competition, he believes it will save the menagerie. He must create the most spectacular illusions and use his machines as never before. At his side is Huxley, who works behind the scenes to ensure Carthage's success. However, as Carthage and Huxley immerse themselves into the competition, the more they learn not only about themselves and what it will take for them to succeed but the other characters in the competition and their will to succeed for perhaps not the same motives.

The characters, from Carthage and Huxley to the other contestants and reporters are so well-drawn and engaging. Even the machines have their own personalities allowing the reader to connect with them and feel empathy with their plight. I enjoyed how Carthage and Huxley weren't quite friends but depended on each other to make the menagerie work and as the competition progressed, their interactions grew more enjoyable and very humorous. The world that these characters travel in is so well created. The way the shows were written/described made me believe that I was a member of the audience experiencing each magical delight. Highly recommend!

The narrator, Travis Baldree, really brought this story to life using different accents and mechanical voices. He truly complimented the written word. His enthusiasm for this story was apparent in the narration.

This was a great story, filled with twists and loveable characters. a lovely tale which will make you smile.

recommended by me. great work Mollie

so imaginative just a wonderful listen

I was drawn to this audiobook as It is a completely different genre to what i would usually listen to and I welcomed the change. i found the story just so engaging and interesting and personally feel that this was down to the narrator . it was wonderfully told and to be honest I really didn't want it to end . lots of twists and turns along the way and a pure treat for the imagination . I can't wait to hear about other books from this collection . I was given this free review copy audiobook at my request and have voluntarily left this review. would highly recommend to readers of all ages