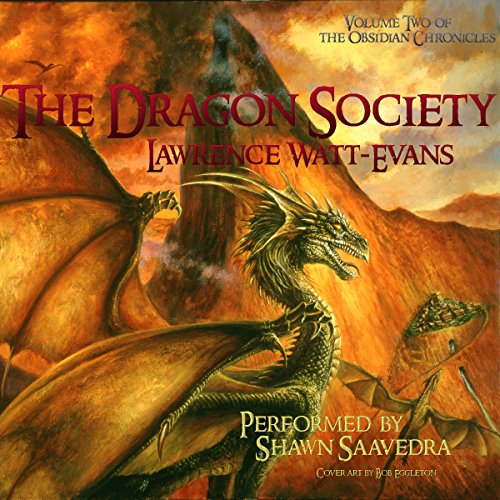 One man must stand against the dragon menace!

It all began with Dragon Weather: a wave of incredible heat, oppressive humidity, dark angry clouds . . . and dragons. Dragons with no remorse, no sympathy, no use for humans. Dragons who destroyed an entire village and everyone in it. Everyone, that is, except the young boy, Arlian.

Orphaned and alone, Arlian was captured by looters and sold as a mining slave. Years later he escaped, fueled by years of hatred for the dragons, bandits, and slavers that took away his youth - and a personal vow to exact retribution from those who have wronged him.

Arlian seeks out The Dragon Society, whose sworn purpose is to stand against the dragon menace. What he learns there is shocking: that he may well be the best hope humanity will ever have for defeating the dragons . . . permanently.

What listeners say about The Dragon Society

The fist book in the series was thoroughly enjoyable. I knew it would be hard to keep up that epic pace of the first book, but the author did a good job of keeping the story interesting, building the world, enriching the characters, and moving the story along. My only complaints would be that the author seems to have the need to pause and review the entire story multiple times throughout the book. Sometimes it seems like every other chapter has a section of overall world/story review, or fully reviewing what the plans of the characters are. As the reader/listener, I obviously remember all of this, as i am engaged with the story, so it came off as continually redundant. That said, I still enjoyed the story, the narration is excellent and engaging, and I look forward to listening to book 3 when it is available!

another fantastic story from LWE!

I was on the edge of my seat! i love these stories . LWE is a master storyteller!

Great series glad it is finally available on audio

As with book one some of Shawn Saavedra's voice choices for characters are odd, but he definitely shows his range. Great middle series book now Great Audiobook

Lawrence Watt-Evans is a great writer, and Shawn Saavedra did a great job presenting this "diamond in the ruff" with his spectacular performance.

I read these books as a kid and I was very happy to be able to listen to them. I wish the 3rd book was available on audible.

Great continuation of a good story!

I thoroughly enjoyed the second installment of the series and look forward to the next, as well!

The narration was awesome and it was nice to have the consistency of voices with the first book!