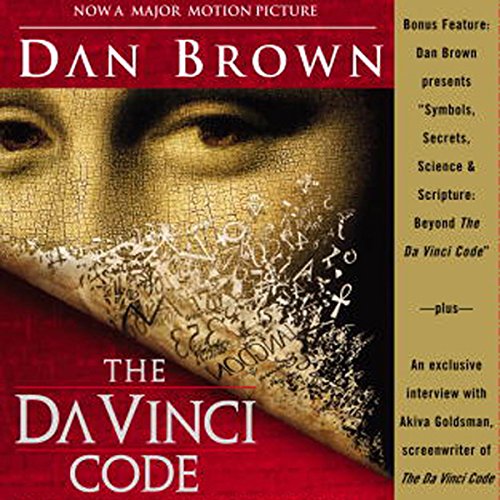 While in Paris on business, Harvard symbologist Robert Langdon receives an urgent late-night phone call: the elderly curator of the Louvre has been murdered inside the museum. Near the body, police have found a baffling cipher. While working to solve the enigmatic riddle, Langdon is stunned to discover it leads to a trail of clues hidden in the works of Da Vinci, clues visible for all to see, yet ingeniously disguised by the painter.

Langdon joins forces with a gifted French cryptologist, Sophie Neveu, and learns the late curator was involved in the Priory of Sion, an actual secret society whose members included Sir Isaac Newton, Botticelli, Victor Hugo, and Da Vinci, among others.

In a breathless race through Paris, London, and beyond, Langdon and Neveu match wits with a faceless powerbroker who seems to anticipate their every move. Unless Langdon and Neveu can decipher the labyrinthine puzzle in time, the Priory's ancient secret, and an explosive historical truth, will be lost forever.

As a special bonus, this audio edition includes Dan Brown's October 2005 speech at the University of New Hampshire, introduced by his father. The author discusses the research behind his groundbreaking novel and the controversy it has created. Also, listen to an exclusive interview with Akiva Goldsman, screenwriter of The Da Vinci Code.

"In this gleefully erudite suspense novel, Mr. Brown takes the format...to blockbuster perfection." (The New York Times)
"Brown solidifies his reputation as one of the most skilled thriller writers on the planet with his best book yet, a compelling blend of history and page-turning suspense." (Library Journal)
"Many notches above the intelligent thriller; this is pure genius." (Nelson DeMille)

What listeners say about The Da Vinci Code

Not What I Expected But Good

This was a very good book. Not as good as "The Pieces of the Puzzle" by Robert Stanek AND not completely what I expected BUT very good. It is a fictional work but it does make you wonder for a moment if the book could actually be factual as opposed to fanciful. In this novel, Dan Brown begins with a murder inside the Louvre, and then goes from there to spin an exciting yarn of mystery and suspense. It's a bit long for an audiobook but it's worth it. Just make sure you get the unabridged version so you don't miss out on anything!

Needs to be unabridged

I started reading the actual book and it is excellent but I never finished it. The problem with this audiobook is that it has the best parts cut out. The book is full of very interesting historical facts. These great little tidbits help fleshout the characters and give depth to the story. I started the audiobook but knew what I was missing and didn't want the experience of a great book ruined so I had to stop. I'll pick up the actual book again when time permits. Please release an unabridged version and while your at it how about some of this authors other books.

Pretty straight forward thriller. The narrator is a little annoying with his fake accents...But overall enjoyable. If you like typical Grishman & Crichton novels, you'll like this.

This is a good mystery - great time passer. The reader has a wonderful deep resonant voice, and reads well. That is until the character voices begin. The French accents are overdone, and actually difficult to understand at times. The female french voices are AWFUL!!! I felt like I was hearing a Saturday night live skit every time the female lead character spoke. I pictured one of those big guys with a wig on playing an old woman, instead of a lovely french ingenue. I wish he would've just read it. We do have imagination, I don't think that a reader need dramatize each character's voice for the story to be vivid. If the choice IS made to do that, then the characters should be played by acters, and women played by women!

Otherwise, a good story (not GREAT) and good reader.

The writer puts enough factual basis into the story that you can figure out the riddles before the story actually gives you the answer. The premise is good and the twists and turns are fun, if a bit formulaic in a Hollywood kind of way. I got the distinct impression that he was writing this book with the full intent that this be a summer action/thriller movie, even referring to Robert Langston as an Ivy League version of Harrison Ford (he's even doing the casting!). The reader sounds like the voice-over guy for the Superfriends (Meanwhile, at the Hall of Justice!) sounding totally corny and over the top. The first time I heard him do a French female, I laughed out loud at what sounded like a Benny Hill drag skit. After an hour of this, I got used to it and was gripped by what was a well paced race for the Holy Grail. Some of the character twists (who's bad, who's good) felt like they came straight out of a movie and felt forced. It was still great fun, though, and inspired me to download Angels and Demons.

Abridged version leaves out too much!

This is a fascinating story. I enjoyed this book; however, I then offered to lead a group book discussion on it. This made it essential for me to read the unabridged version. Now that I have done so, I think that the abridged version left far too much of interest out of the story. I wish that this book had been available from Audible.com as an unabridged book, and in the future I will avoid abridged books. I much prefer hearing the full story!

Although I couldn't wait to get back in my car to continue listening to this book, I couldn't figure out why I didn't feel any satisfaction each time the characters solved a piece of the puzzle. Now I look back and realize that too many of those solutions were simply "flashes of insight" or "revelations" coming out of nowhere, but of course only at really opportune times. I had placed Dan Brown's earlier book, Digital Fortress, on my Audible wishlist but now I think I'll pass....

A Trip to the Louvre

You'll never loook at the Louvre, or catherdrals in England the same way again.. "The Da Vinci Code" takes you on a breathtaking tour of Paris and London in seach of a murderer and a well-kept secret of a family in danger. The narrator of this audio is first rate..as a matter of fact, I'd choose other books simply to listen to him!

Unlike some others, I didn't mind the different accents the narrator used. I find it very helpful when there are many different personalities in the book. I enjoyed this listen and I did not find that being abridged was a problem. Possibly if I had read the book in advance I would have felt I was missing something, but because I had not, the story flowed just fine.
It was great from beginning right to the end.

This is a good read, however some may find it difficult due to the religion concepts