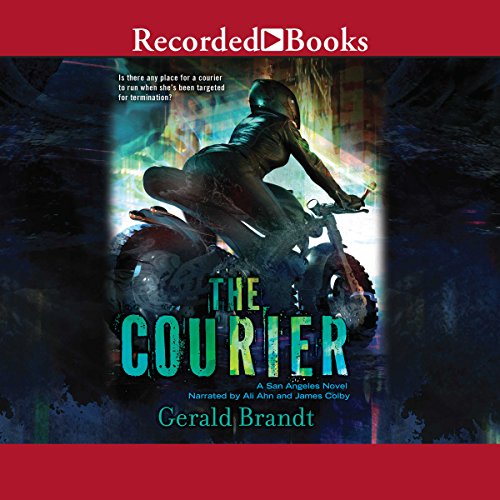 By: Gerald Brandt
Narrated by: Ali Ahn,James Colby
Try for $0.00

Kris Ballard is a motorcycle courier. A nobody. Level Two trash in a multilevel city that stretches from San Francisco to the Mexican border - a land where corporations make all the rules. A runaway since the age of 14, Kris struggled to set up her life, barely scraping by, working hard to make it without anyone's help. But a late-day delivery changes everything when she walks in on the murder of one of her clients.

Now she's stuck with a mysterious package that everyone wants. It looks like the corporations want Kris gone and are willing to go to almost any length to make it happen. Hunted, scared, and alone, she retreats to the only place she knows she can hide: the Level One streets. Fleeing from people who seem to know her every move, she is rescued by Miller - a member of an underground resistance group - only to be pulled deeper into a world she doesn't understand. Together Kris and Miller barely manage to stay one step ahead of the corporate killers, but it's only a matter of time until Miller's resources and their luck run out.

What listeners say about The Courier

The story was fun and engaging. The author did a good job. My only complaint was the story didn't actually have that motorcycle in it.