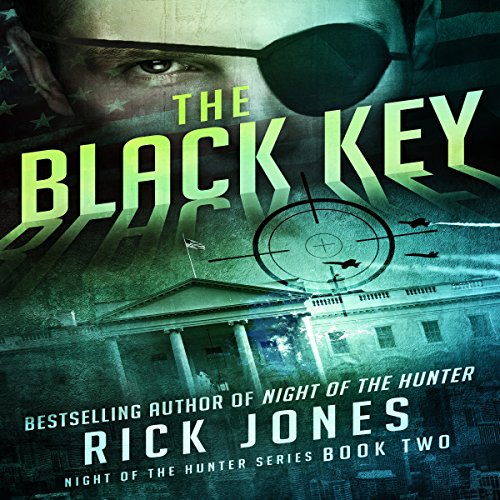 By: Rick Jones
Narrated by: Patrick Conn
Free with a 30-day trial

During military exercises in the Sea of Japan, rogue missiles fire off from a US naval battleship and head directly to the heart of North Korea.

During a return trip to Washington, D.C., Air Force Two disappears over the Rocky Mountains.

President Jack Meacham was once the former director of the CIA who was instrumental in the collapse of the Soviet regime. Now, nearly three decades later, his past comes back to haunt him with a single message: "Are you willing to sacrifice your life for the good of the whole?"

The volley of missiles and the disappearance of Air Force Two were mere flexes of muscle from one man who wields the Black Key, a tool that is capable of controlling nuclear arsenals and weaponry systems. It can control and manipulate economies. And it could be the most damning weapon the world has ever seen with a simple push of a button.

Forced to make a choice, the president finds himself at odds with a former operative who seeks to end his life with a single twist of the Black Key. In the most dangerous game in the world, President Meacham is given two options: "You have 48 hours to end your life for the greater good of the whole...or the United States will become a no-man's land for thousands of years to come."

With time winding down, the president turns to Jon Jericho, a.k.a. The Hunter, and his Special Operations Group, to locate and neutralize the man behind the Black Key. But the team quickly find themselves going up against a sophisticated military unit who protects the man behind the Key.

With the fate of the president and an entire nation hanging in the balance of five men, Jon Jericho and his team must stop a man who has the capability to wipe out an entire superpower with a single turn of a key.

If Jericho's team fails, then the president must face two critical choices: Do I live and allow the United States to be destroyed? Or do I kill myself for the greater good of the whole?

The clock is ticking.

And it's almost zero hour.

What listeners say about The Black Key