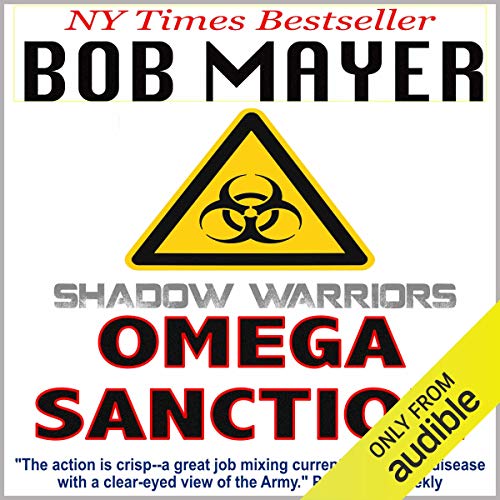 The most frightening weapon ever invented can be unleashed by a single person. And now, they have chosen her. On the border between Croatia and Bosnia, a killer practices his art on UN Peacekeeping troops, leaving handless bodies on display on crosses.

In a trailer near Fort Bragg, a hitman targets a computer genius who has uncovered information more explosive than he could ever guess. And in an ancient, abandoned castle in Germany, a teenage girl is plunged into a living hell - one that will take her into the heart of a murderous Middle Eastern plot. The only mistake the bad guys make, is not taking into account that her father is Special Forces.

Now only one Special Forces operative can stop two madmen from turning the girl into a devastating biological weapon. In a series of brutal covert operations, Thorpe must battle not only the enemy, but betrayal from his own side to not only stop the weapon, but save the daughter of his best friend.

What listeners say about The Omega Sanction

The book starts with a series of seemingly unrelated chapters: An American teenage girl is brutally murdered in Germany; A sniper practices his craft on the border between Bosnia and Croatia, leaving handless corpses tied to crosses; A group of Delta Force commandos work with Navy SEALS to re-take an oil rig from suspected terrorists. Bob Mayer soon ties everything together in a first rate read.

Major Thorpe, Delta Force operator, thought he had retired. An Army mix up had him needing more time in order to qualify for his pension. He is re-activated from the reserves and sent to Fort Bragg to fulfill his active Duty requirements. Thorpe is reunited with his old friend Master Sergeant Dublowski. Dublowski tells Thorpe that his daughter Terri has been missing for several months and the Army has determined she is a runaway. Thing is, the Master Sergeant doesn't believe it. He asks Thorpe to look into for him.

And so begins the adventure to locate Terri Dublowski. Along the way, they uncover a terrorist plot to release VZ, a deadly nerve gas that could potentially kill thousands. There are also people who know more than they let on mixed in with some mysterious deaths. Add in some shady CIA operatives in a conspiracy to further their own careers and you have a very exciting story.

This is more a detective story than a Delta Force action thriller. It does contain a fair amount of action, but most of the book is determining the whos, whats and wheres involved. For me, it had just the right mix. I like a good mystery as well as an action adventure. If that fits your style, then I think you will like this book also.

Someone who is a little more into creepy, abusive sex.

What was most disappointing about Bob Mayer’s story?

It was grim and gruesome. It lacked any sense of fun, which I expect as least some of in a thriller.

Grim, gruesome, too much talk and description and not enough plot and forward motion, unpleasant, not fun, and the author comes across as a little creepy.

Wish I Had Known This is Part of a Series

I thought this was a good book, but I wish I would've known it is part of a series by Bob Mayer when I bought it as a Daily Deal. I would've started with the first book. I could have appreciated the references to previous events more.

Feels a bit abridged or rushed

I listened to a number of the Dave Riley series and really enjoyed the character and the apparent precision Mr. Mayer gave to military detail. I didn’t listen to the last 2 books in the series because some of the reviews indicated that Riley had been sidelined in the story and Riley was one of the reasons I listened to the books. I decided to try something different that Mayer had written. This book received pretty good reviews and I suppose from a technical perspective it is pretty good, but lost are the characters. They didn’t really develop. It almost felt like an abridged book keeping only the key elements and all the action to tell the story while the characters seemed more minor. If connecting with the characters is important to you, skip this book. If you like action and don't mind an abridged feel try this book.