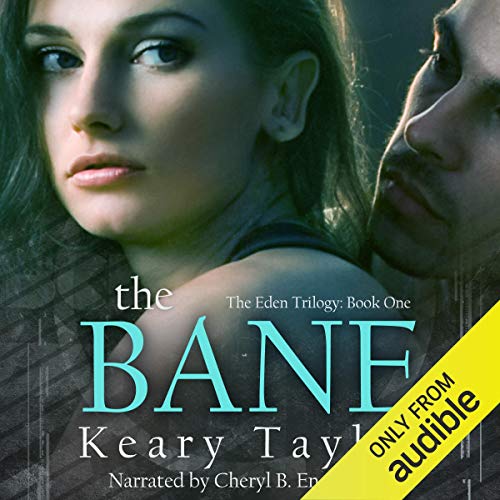 By: Keary Taylor
Narrated by: Cheryl B. Engelhardt
Try for $0.00

Before the Evolution there was TorBane: technology that infused human DNA with cybernetic matter. It had the ability to grow new organs and limbs, to heal the world. Until it evolved out of control and spread like the common cold. The machine took over, the soul vanished, and the Bane were born. The Bane won't stop until every last person has been infected. With less than two percent of the human population left, mankind is on the brink of extinction.

Eve knows the stories of the Evolution, the time before she wandered into the colony of Eden, unable to recall anything but her name. But she doesn't need memories to know this world is her reality. This is a world that is quickly losing its humanity, one Bane at a time. Fighting to keep one of the last remaining human colonies alive, Eve finds herself torn between her dedication to the colony, and the discovery of love. There is Avian and West - one a soldier, one a keeper of secrets. And in the end, Eve will make a choice that will change the future of mankind.

The Bane is The Terminator meets The Walking Dead with a heart-twisting romance. Previously published as Eden, due to reader demand it has been revamped and rereleased as The Bane: book one in The Eden Trilogy.

What listeners say about The Bane

Unrealistic and Kind of Annoying

I really waffled between a 2 and a 3 star rating after listening to the Audible version of this book; it definitely wasn't a 3 due to a lot of issues (plot, characterization, world building, writing, editing, to name a few) but a 2 rating seemed mean. I didn't find the world imaginative and certainly the plot (using that term loosely here, there wasn't much of one) was not as advertised. What we have is an angsty love triangle with some post apocalyptic trappings. As such, this book is for the people who want to read about waffling over two guys and maybe shooting some bad guys in between. Definitely not for sci fi, dystopian, post apocalyptic, or picky readers. An especially painful Audible narration exacerbated a problematic book.

Story: Nanites intended to be used to repair humans were instead subsumed by the military to make super regenerative soldiers. The nanites go crazy, take over, turn everyone into zombies, and overnight we have a figure that 98% of the population has 'evolved'. Eden is a small community of pure humans trying to hold out from being infected and changed. Eve, an 18 year old who doesn't remember her past, fights to save Eden and its inhabitants (especially hunky Avian). Cue the arrival of a small group of survivors with an additional hunky guy Eve's age who may or may not have a connections with Eve's past.

So, let's start with the cliches:
- over-thought out character names. Eve (yeah, you won't see her plot surprises coming with that name *snort). Avian (because he makes her heart soar - get it? Get it?!). As a side point, his parents liked birds so they named him Avian; good thing they weren't studying sea life or he'd have been named 'Nautical' - call him Naughty for short). And then there's West - not to be confused with East or South. Everyone else gets normal names like Gabriel or Sara.
- Obsessive love triangle that finds characters thinking of each other constantly - regardless of danger
- Unique snowflake main character with a mysterious past
- At least one character (probably love interest) with oh-so-NOT-coincidental answers to unique snowflake's mysterious past
- Situations completely unrealistic but there to emphasize the romance or to add drama to the romance
- Kick butt main character rendered completely ineffectual by the romance

The real problem with the book, however, is that the plot is just daft. Nanites that have to touch in order to infect? Machines that can't find people camped out in the same place for months but have the technology to use planes, cars, etc? A girl who ponders her humanity and believing she has no emotions - while getting hot and bothered over both hunky guys?? Heroine completely unaware of pre-apocalypse life, lives in a tent, yet able to easily identify aspects of civilization, from showers to car types. A trip across a hostile COUNTRY, East to West coast, which happens in a few pages and no one attacks?? An inability to make up a creative lie to save their lives (hey, let's tell the new and terrorized people we have one of the evil robots with us, they won't shoot first and ask questions later!). And then there is the science...regeneration, robot evolution, experimentation, etc., Best not to go there.

Because really, this is a soppy teen romance. Eve, as a character, is so ill defined and overwritten that by the end, readers may end up hoping both hunky guys find someone else. There's little character growth and she doesn't improve as the story progresses; she actually gets more annoying and unlikeable. It can feel very Mary Sue.

The Audible narration was terrible. Was it the worst I've heard? No, definitely not. But the narrator completely lacked emotion and nuance - my 6 year old has read aloud with more emotion than I heard in this book. So I can say I avoided the typos but also had to deal with nearly all emotion and impact summarily drained through a very uninspired narration. I'd recommend listening to the Audible sample (and tendency to mash sentences together in a very distracting fashion) before purchasing that version.

So, all the silliness, overtelling, love soppiness aside, I did manage to finish the narration while doing heavy yard work. It's a no-brainer time waster and sometimes that's all someone wants.

narrator needs some personality! She was reading ( in a monotone ) as fast as she could like she had something better to do. Luckily for her, the author wrote an excellent story.

I loved it. I really liked the characters and story premise. my I would recommend it.

written really well. I was captivated to the very end of each chapter. loved the narrator.

The world has been destroyed by the Bane, who were created by a scientific experiment gone wrong. They infect and kill anyone they touch. A few survive and this is the story of Eve who was changed but not destroyed. She meets a new person, a young man, who awakens in her feelings she had not felt before. She also cares for her old friend.
Well written and well built world. Also well narrated.

Very Good, narrator not so much

This is a good start to a good trilogy. The narrator read to fast and choppy. I hope some one else narrates the next one. It's amazing how a narrator can influence how much or how little you enjoy a book. I have it on my kindle so may read it myself.