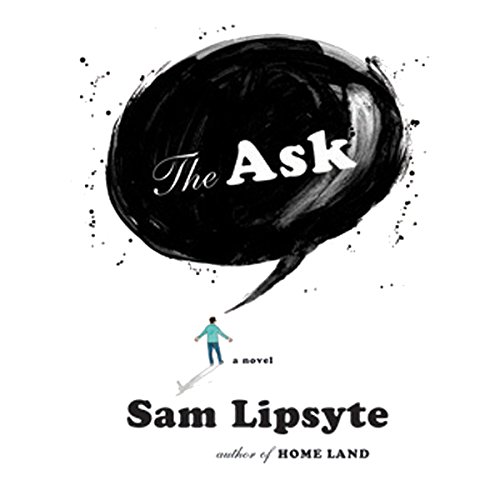 A searing, beautiful, and deeply comic novel by a young American master.

Milo Burke, a development officer at a third-tier university, has "not been developing": after a run-in with a well-connected undergrad, he finds himself among the burgeoning class of the newly unemployed. Grasping after odd jobs to support his wife and child, Milo is offered one last chance by his former employer: he must reel in a potential donor - a major "ask" - who, mysteriously, has requested Milo's involvement. But it turns out that the ask is Milo's sinister college classmate Purdy Stuart. And the "give" won't come cheap.

Probing many themes - or, perhaps, anxieties - including work, war, sex, class, child rearing, romantic comedies, Benjamin Franklin, cooking shows on death row, and the eroticization of chicken wire, Sam Lipsyte's The Ask is a burst of genius by an author who has already demonstrated that the truly provocative and important fictions are often the funniest ones.

"Lipsyte's pitch-black comedy takes aim at marriage, work, parenting, abject failure (the author's signature soapbox) and a host of subjects you haven't figured out how to feel bad about yet." ( Publishers Weekly)
"The kind of book that gets passed around, underlined, dog-eared . . . It makes one laugh out loud while pondering all the ways in which all lives, invariably, go wrong." ( Esquire)

What listeners say about The Ask

I heard the author read of a segment of this book on the WTF podcast and had to try it out, and I have devoured the audiobook in record time.

It is a very funny, unflinching, and direct novel, and has the kind of edge to it that comes from a writer who is up for actually going with the truth. Also, for me personally, I really loved the way he captured the neighborhood of Astoria in Queens. So much of that rang true, and so many of his chapters went from enjoying moments of recognition, to being punched in the gut, like the end of chapter 8.

I am really glad I got this, and look forward to seeking out more from Lipsyte (who is also a very good reader, there is something about his pacing in the audiobook that strikes a perfect tone for the main character, so hopefully at some point more audiobooks of his prior work will be added to Audible).

David D. (via my wife and my shared account)

Lipsyte loves paradox, puns and all manner of wordplay, and this book is a real delight as far as that goes. The plot is satisfyingly convoluted, and well told. Every single character, except the protagonist, is insulting and murderously aggressive toward all the other characters; every character, except the protagonist, has reached adulthood with a more or less coherent identity based in aggression. Though amusing, in a nasty way, they all sound alike, and a tender soul is grateful her own world doesn't contain more than a few of them. The world of this book, however, contains nothing but. The protagonist, Miles, is struggling for maturity, decency and basic coherence against overwhelming self-loathing, self-pity, resentment, envy and paralysis. As a consequence, Miles is someone you don't want to spend 10 minutes with, much less 8+ hours. Still, the story rocks along, and I stuck with it, but perhaps I'm not sophisticated enough to enjoy cruelty, which is mostly what this book is about.

The beginning was very caustic and very good.

This is a great book if you're an artist who went to art school and/or if you work in academia - biting and accurate personality profiles, and unflinchingly meticulous descriptions of university office politics - at least at the beginning. Sadly the narrative dives into a more predictable, heavy handed, and less specific plot with less realistic, more cartoonish characters. I wished it would have meandered in the lives of the more ordinary, bitter office workers. I got the feeling that someone told the author to hurry up and finish the book somewhere in the middle. I like the first person narration, however. It was interestingly noticeable that the reader never got to find out the viewpoint of the other characters, and was forced to be as blind as the main character.

Having read his hilarious HOMELAND, I was intrigued to hear Lipsyte perform his new book, THE ASK. Here is a writer extremely attentive to language: he builds tremendous humor out of his discoveries of eccentric phrases, institutional jargon, ad-speak, and, well, the strange agency of the language governing our lives to breed creatures apart from those species concerned with communication, transparency, and honesty. He isn't precious with the stuff -- he is extremely ruthless with his observations of spoken language and the dead phrases we inflict on one another. Hearing his reading of THE ASK was not only the chance for me to catch a strong reader (you can tell Lipsyte enjoys reading, must really kill on the bookstore appearance circuit) but also was the opportunity for me to catch a secondary layer of meaning, built up through the nuance of highly intentional delivery and phrasing. It is gallows humor on the page -- but somehow with the author teasing you carefully through it, the audiobook deepens as both "dark" and "comedy."

This book began with a bang...had me laughing out loud a couple of times. Then it seemed to get lost in the shuffle. The central character was hard to find amidst the shifting plot lines, and the plot was hard to find amidst the shifting characters. I wasn't sure where the author was trying to go, and in fact, I don't know that he really knew where he was trying to go.

Sam Lipsyte has a keen enough understanding to tackle and write about complex systems such as nonprofit fundraising but with a sardonic edge. He's a great narrator, too.

I cannot remember if a book has ever made me both laugh out loud and sit in depressive contemplation as much as this one. The latter side-effect may not be everyone's cup of tea, but I found it a powerful experience. Through perhaps more style than substance, Lipsyte manages to paint beautiful rants of a malcontent writer that somehow also captures the setting perfectly as well: elite America at the start of its decline still struggling with denial over the impact of inequality on its downward spiral.

So as a liberal, I've always found conservatives' obsession with the concept of liberal guilt amusing. To hear them tell it, liberals just can't get over the whole killing the Indians and enslaving the blacks thing, and all the men have vagina envy.

Well, none of the liberals I know are anything like that, but the main character in this book clearly is, and as far as I could tell, Lipsyte doesn't mean this ironically. Milo is jealous and bitter at those who have gotten more out of life than him, and simultaneously sorry for everyone who has less. He works a crummy job asking wealthy people to donate money to an art school for self-indulgent and privileged students, and is fired after a false allegation of sexual harassment by a male colleague. He's rehired on the sole condition that he can get a large check out of a former college friend, who has a special personal mission he thinks Milo would be perfect for. Meanwhile, Milo's wife is cheating on him and refuses to stop, and his son is enrolled in an experimental daycare, which is constantly causing problems.

One of the funniest scenes has Milo asking a colleague whether she would read a book about a guy like him. No, she replies, he's just not relatable. I won't go quite that far. Lipsyte is clearly a writer of some talent (I haven't read any of his other works). But in this book he seems obsessed with what strikes me as a caricature of the political left. To be clear, this is an at least somewhat approving portrait. Lipsyte is certainly not a conservative offering up Milo as a cautionary tale. But neither does he offer us any hope in Milo's struggles. Nobody really cares about Milo, including the reader, because he is an inherently sad and unlikable person, and because in the grand scheme of things he's not nearly as badly off as some others. Milo is simply stuck in the system, every bit as much at the end of the novel as at the beginning. Typical liberal, always blaming society for his problems.

There are some great lines in this book and some wonderful dialogue.

So, I was mildly entertained.

The plot, or storyline is a mess. I can't recommend this book unless you have absolutely nothing to do.

The premise is great. Failure to execute.

This is the latest of a (sadly) growing number of books that publishers have inexplicably chosen to have read by their author, when the author has no dramatic ability and no apparent director to oversee the production. Sam Lipsyte's droning reading keeps you guessing which characters are saying what in long conversations, and eventually proves distracting enough to keep you from following the story at all. This is one to avoid.