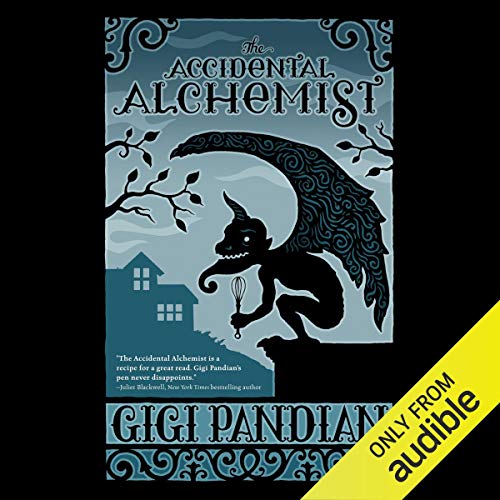 By: Gigi Pandian
Narrated by: Julia Motyka
Try for $0.00

Unpacking her belongings in her new hometown of Portland, Oregon, herbalist and reformed alchemist Zoe Faust can't help but notice she's picked up a stowaway. Dorian Robert-Houdin is a living, breathing three-and-half-foot gargoyle - not to mention a master of French cuisine - and he needs Zoe's expertise to decipher a centuries-old text. Zoe, who's trying to put her old life behind her, isn't so sure she wants to reopen her alchemical past... until the dead man on her porch leaves her no choice.

What listeners say about The Accidental Alchemist

Brixton ruined this for me.

As others have noted, this novel has a good central idea. A lead character who is an alchemist with a specialty in plant alchemy? Newly moved to a charming old fixer upper in Portland, Oregon to start a new life? Exploring her charming and funky neighborhood, putting her house in order, getting going on her alchemy again after many years of neglect? A stow-away gargoyle with a significant health problem and a mysterious old book? The gargoyle is a masterful french chef who spends almost all his time adapting standard recipes into vegan ones, since our heroine is vegan? Sign me up!!!
Yet, in execution this story falls far short of it's potential. The only real good part of it is the the gargoyle, Dorian. The reader executes him perfectly, so that he is charming and endearing and suave. There is quite a bit of discussion about food here, and it's all wonderful as well. I have found myself searching for some of the recipes online because they sound so delicious. In other circumstances (like if the rest of the story was better) I would consider buying the physical book in order to access them.
However, outside of Dorian, there don't seem to be any attractive characters that make any impact. Some of the supporting characters seem like they could have been interesting, but we don't spend much time with them, and the main character, Zoe, doesn't seem to be able to hold the stage. She'd be nice enough in another book, maybe one written by Juliet Blackwell or Susan Wittig Albert, but written by this author she's not strong enough to be the lead. This allows Brixton, the 14 boy who breaks into Zoe's house almost as soon as the story starts, to take over the entire book. He's a jerk. I guess it's supposed to be ok with us that he's a jerk because his mom should have been arrested for neglect years ago? I feel bad for him because of his miserable parenting situation, but that doesn't change the fact that he's a selfish, abusive, entitled little git. I have no desire to spend time with him at all. Sometimes, with a character like this, an event will take place in the story that changes them into someone who actually adds something positive to the mix. In this case, however, I've got 3 hours and 40 minutes left of this story and he's just getting worse. Since the main character is weak and stupid, and the mysteries are weak and undeveloped, that leaves Dorian as the only attractive character that I care about in the entire book.
I want more from a book than this.

If I wanted to read about food I would have purchased a cookbook. I really felt like this was propaganda for Veganism. I have nothing against being a vegan but you don't have to give me every breakfast, lunch, and dinner menu throughout the book. It could have been a good mystery if all the recipes were not included.

The narrator was good, but the story did not grab me. It read like a YA novel. The constant mentioning of veganism was very preachy and didn't add to the story at all.

Sub-par young adult literature. Great reader but the plot is seriously lacking! Pass on this one!

the story was ok. all the characters were plodding and the concept was intriguing at the beginning but the main character was unbelievable to the point of nausea. I don't know if the other books in the series are any good but this first book makes it very hard to want to read further into the series.

Would you try another book from Gigi Pandian and/or Julia Motyka?

Very probably not. I found Ms. Pandian's plot contrivances unacceptable. With violence sprouting round the protagonist like mushrooms, no one notices... Sigh.

Would you ever listen to anything by Gigi Pandian again?

I won't let the reader get between me and a book I wish to hear.

Boredom! To the point I quit before finishing it.

The living gargoyle is, truly, cute.

I neither liked nor disliked this book. If you are a vegetarian, you may like it as its a huge part of this book. I won't be following this series

Cute concept but it got old quick. Skipped ahead several chapters and I did not miss anything.

What was most disappointing about Gigi Pandian’s story?

The story line seemed like something a college freshman would come up with.

What character would you cut from The Accidental Alchemist?

A miniature French gargoyle who learned to cook from a blind chef?
An alchemist who can't read a book about alchemy?
Teenagers making the same moronic mistakes over and over? - Well, I'll give you that one.
Vegan food in every chapter that supposedly taste gourmet?
A simple mystery which drags so slowly, why you ask? See above.

The narration is good, Julia struggles with some of the male character, especially the shoddy French accent, but that's hardly her fault. I'm almost quit listening, but I kept thinking it would speed up, unfortunately, the story stayed slow and juvenile.

What a pleasure when you find a really great book. The story has characters that you can relate to and follow with relish as it unfolds. I recommend wholeheartedly .

Promised much, didn't quite deliver....but it was an entertaining performance. The narration by Julia Motyka was excellent. The story premise was excellent and, indeed, started off well, but everything started to slide down hill from two-thirds through the story. The reveal at the end was weak, to say the least. I was disappointed. I hope that the writing in the follow-up book in this series improves because, as I've said before, the premise is excellent, but I won't be purchasing it to find out. Once was enough.

I tried and tried to get through this book - the concept of it was so appealing to me - however I finally gave up the ghost with only 2 hours left. I think another reviewer described it best; a bit Scooby Doo - however the narrator made is sound like a news reader was recounting the story - with a complete lack of suspense, emotion or exclamation marks! (So not quite so Scooby Doo after all). I don’t know whether it was the lack of character development, endless references to ‘erbs’ (herbs for any Brits reading) or the smug disposition of the ‘hero’ - but the combination of it all just killed it in the end for me. I still don’t know who the ‘culprit’ is and sadly I don’t care any more. The author however is clearly popular though so maybe it’s just not my cup of ‘erbal’ tea…

"I'm so quirky!" Said myself

I love a unique heroine but I would rather reach that conclusion myself through enjoying the story, instead of having to hear the main character constantly patting herself on the back. When you overdo it, Its just cringy.

I listened to 20 mins and decided If you'd enjoy reading something along the lines of "omg I'm like so a wiccan vegan heroine but like, nobody gets me....I made myself a healthy ginsing and lemon grass smoothy and looked at Brad's handsome face and flashing eyes" then this is for you. For the rest of us maybe just enjoy the cover art and not bother with the book.

cosy mystery with a twist

fun and funny. with a gourmet French gargoyle and accompanying recipes there's a lot to love in this series

story would be better without the vegan recipes

i liked the general story line but why so many in depth recipes it was unnecessary and seemed like story padding.

Great book, great performance and I like the concept. Would give a perfect 5 stars but for one thing...

Dorian is technically a grotesque. Gargoyles had water spouts sticking out their mouth and were used as gutter decoration.

Common mistake but it drove me made throughout this book. I know it's a bit nit picky but if this is the biggest complaint I have... You are doing well.

How do you know if someone is a vegan?

O…M…G!!!!!
I’m guessing the author is a massive vegan! Every single opportunity to mention veganism, vegan food, vegan food swaps for eggs or milk or cheese is leapt upon with enthusiasm.
The story isn’t bad, but stop with the absolutely relentless vegan propaganda.
Normally this book would be right up my street, but I won’t be listening to any more of this author’s work, because by the end I wanted to scream as vegan cupcakes, or vegan eclairs were dropped unnecessarily into the story YET again.

However, if you’re vegan, dig in…. You’ll find it mouthwatering!

Overtly highlighting and over describing all of the ingredients in everything all of the time ruins the momentum of what is otherwise a decent read. Make a cookbook. I would buy it. But let your writing add depth to a character…not by highlighting they reach for “unsweetened cocoa”…

The gargoyle is awesome

...but the constant, detailed descriptions of every single thing the protagonist ate became incredibly annoyibg.

I was really taken from the start of this series. Just wow.. the performance is fabulous and the story keeps you enthralled from the beginning. The characters develop up as they move through the Storyline and I am a sucker for fantasy and reality or what I would call mystical realism. Will purchase the rest as I would like to see where it takes me. I absolutely love the fact that it is a stand alone book ad well.. with a solid end .

I really enjoyed the descriptions of smells it made me feel like I was sitting in a cottage with herbs all around me and tea brewing nearby. the story takes its time in a good way without feeling rushed or sudden, this is the kind of book you read to relax.