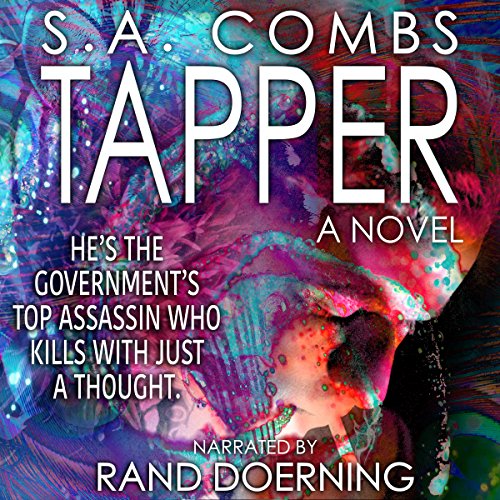 Tapper - a projecting empath - is the product of a corrupted government. Nurtured from birth and ruthlessly trained, Tapper learns the art of manipulation and persuasion - becoming an elite operative with a gift of immense power. He’s the government’s prized spy until he does the unthinkable. Horrified by his actions, branded as a monster, he goes into self-exile on Mitta-4 - a colony planet on the fringe of the known universe - to settle down and lose himself in a new life. There, he finds danger comes in many guises.

A dark and deeply moving story filled with amoral behavior and one man’s quest to atone for his darkest impulses.

S. A. Combs writes a good story. It's something different than most of the stories being written. Without giving too much away, I enjoyed how he switches between the past and the present. The story is refreshing because it has a new battle ground for good vs. evil - the mind. I'm hoping this can turn into a series or a least another book. As for the narrator, this is the first book I have listened to by Rand Doerning and I believe he has done an excellent job.

This was a fun sci fi, spy story. I liked the mix of back story and present story. Really made the main character deep and one you start to care about. I thought this was a well written and engaging story. It is well narrated and worth your time, if you ask me.

A different kind of story

This book was alternating chapters of Tapper dictating his life story as he remembered his growing up. It bounced between his past and his near present.

He was a person who could project empathic feelings to others. He was the pawn of a world government and after he tired of this work he tries to escape. He finds that this is not as easy as he might like and must overcome many obstacles in his path to finding peace within himself.

The book was really good and presented in a many that was very enjoyable. The narration was outstanding and very understandable and projected feeling and excitement.

I was given this book free of charge in expectation of an honest review.

I was freely given this title by the author for an unbiased review.

The author did a fine job weaving an intricate tale of how one man could change the world... with his mind.
I found the story a bit difficult to follow but once I understood the author's intent, I was hooked. Good story, good narration and solid ending.

The story is predictable but it was still an OK read. The narrator is new to me but he did great in narrating the story.

I really enjoyed this listen! It was an interesting tale and felt like the pace was great. The chapters alternate between present and flashbacks which reveal more and more information motivating Tapper's present circumstances and decisions. I really enjoyed hearing Tapper's story in this manner and the evolution of his character. I was slightly disappointed with the ending as it felt a bit abrupt. I think there was huge potential to drag things out a bit longer though I can also see how it was the culmination of the story we were told up to that point. It may have felt this way because I was really getting into the story and world at that point and wanted more!

Narration was great for the most part! I think some parts of the narration felt a little inconsistent (maybe a little monotone?) but not enough to distract from the story or to make me dislike the narration. Overall it was great I would have no problem listening to more works narrated by Rand Doerning!

Tapper is such a unique character. Child prodigy, Strong em-path, trained assassin and a guy looking to get away from it all.
It's told in 2 parts, his present situation and in flashbacks, which do not take away from the story, but adds to this one. Boy, his father was a surprise.
It's important to have the right narrator to bring the author's words to audio, Rand Doerning is perfect. His voice is pleasant, and clear. His characters were will defined. Really brought Tapper to life for me.
Great story, hoping for a continuation.
This audio was given to me free at my request & I made this review voluntarily.

Heard It All Before but Still Fun

“Tapper” is a light sci-fi read that blends a bit of spy craft, war games and theological and philosophical musings with dialogue and characters that feel like touchstones of pop culture tropes/character avatars into an interesting amalgam found mostly in comic books/graphic novels— a super hero style MC and action sequences with thinly veiled commentary on the human condition and the divine.

Told in chapters that alternate between telling his life story from the day he was born “until he does the unthinkable” and his present circumstances, the reader goes from Trapper’s years of isolation in a government facility and his eventual training to become a government weapon to his current desire to live out his remaining days in peace on a colony planet at the edges of human civilization and dealing with the government's "reluctance" to let him go.

For me, the fun aspect of the book is that its simple dialogue and overall tone, perfectly conveyed by narrator Rand Doerning, continually evokes imagery from popular culture. It’s like a Bond movie, Call of Duty/Halo, and pretty much any American war movie rolled into one. The military and government characters have the same dialogue that populates most movie/video game about these type of people—the crudity and political incorrectness of the military characters and the self-serving/self-aggrandizing talk by political figures and villains.

For example, the space Marines in “Trapper” seem to be the spitting image of the space Marines from Aliens, from the cigar chomping, barrel-chested Sergent to the unseasoned, barely tolerated Lieutenant (although with much better outcomes from all) with Trapper being the Superman of empaths with abilities he uses like a Cerebro-charged Xavier at the height of his power. While I enjoyed Doerning’s delivery that ranged from the “stop right their, villain”-style of the American Hero to “Oo-rah itching for a fight”, the fact that the book’s dialogue, narrative style and secondary characters are such well-worn tropes that dozens of movies/comics/video games spring to mind during the course of listening, does not speak to the originality of the content.

However, interspersed in the mind-killings and plasma gun action are philosophical/theological musings/discussion that balance out the more cut-and-paste story elements. Trapper himself is interesting in that while, “[he doesn’t] see [himself] in terms of good or evil right or wrong. But more like a human reflection, moving among the world around me, curious about the unusual”, he isn’t amoral and does view his actions and existence in terms of bad and evil since he fears God will not forgive him for them.

“Overall, “Trapper” is an entertaining listen, especially with Doerning’s pitch perfect delivery. Although not as complex as what “one man’s quest to abstain from his darkest impulses” seems to convey in the blurb given that he doesn’t want to kill and has no trouble curbing that “dark impulse, it’s a good book for those unfamiliar with or not a fan of most sci-fi as it is very light on space faring terminology or in-depth worldbuilding and reads mostly like a completely Earthbound adventure.

Life and times of a projecting empath

Quite often it seems like you have a choice with scifi/fantasy books, you can either have a well-built and fully realised world around your heroes or you can have a standalone book as more authors seem to be more comfortable when they have the additional space of a series to work in, but that is not the case with this one. The author has done a good job of doling out enough of the crucial information about the world that it still feels fleshed out without taking up too much of the book to do so.

The star of the book is a man named Tapper, born a projecting empath and controlled by the government from an early age, in part due to the inherent danger in his powers if they are not kept under control by him as was not the case when he was very young as we see during some of the sections of the book that flashed back to that period. The book covers most of his life from those early days upwards until he finally breaks away from the government and settles down on an isolated planet for what he expects to be a more rustic retirement.

This is the second book I have listened to that has been performed by this narrator and again he has nicely enhanced the book with a pleasant tone and suitably distinctive voices for the various characters.

Overall, this was a strong standalone novel, but I wouldn't be surprised if the author chooses to revisit this world with other characters too in the future.

War is the natal state of humans.

"I was one hour old when I committed my first murder..." From the opening line, the reader is plunged into the relating of his life, by Tapper, to a video recorder, in 2191. Born with a freak ability and considered 'a menace to society,' he was brought up in a military facility with almost no human contact (even his nappies were changed by a robot and learning came from vids), until, at four years old, Teach arrived to teach him, to befriend him and to show him how to control his terrifying power as a true projecting empathy. And to give him a name: Tapper.

The story, told in the first person by Tapper himself, is conducted from both ends of his life: his childhood and years working for the government, and his later experiences after he retires to start a new life far from earth. The chapters alternate until the earlier time catches up with the near present- a clever device which encourages the reader ever forward to discover what caused the events related.
The writing style is simple, easy to read and enjoy filed as it is not only with death and destruction but also the wonder of life.

Rand Doering's narration fits perfectly with the writing style. His pleasant, melodious voice, with good intonation and understanding of the text, delivers Tapper's story as his own, the pace gentle and appropriate. His voicings of all of the other characters makes each individually identifiable, too. An excellent performance which very much enhanced the book for this reader.

The book has fast paced action but is more than just a thriller as it lightly touches on the nature of man, of society, and of life itself. The author, apparently, received the book in a dream but struggled to write it down because of the deep emotional impact it created within in him. I am so glad that he managed to overcome his reservations: this is a great story I would recommend everyone read - with so many aspects within it, not just S.F. or action thriller, it is one for all to enjoy.