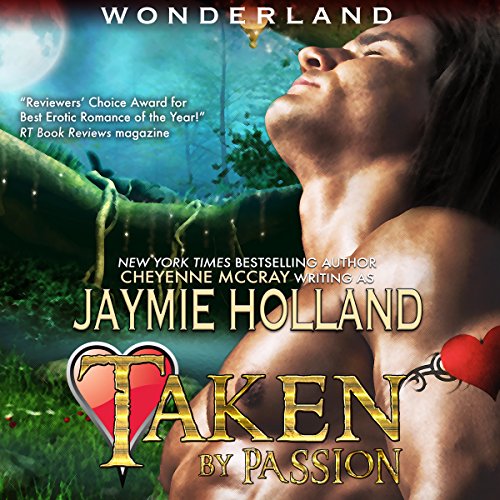 Taken by Passion: King of Hearts

By: Jaymie Holland,Cheyenne McCray
Narrated by: Kelly Owens
Try for $0.00

After being cheated on yet again, full-figured Alice O'Brien no longer believes she'll find her Prince Charming. She resolves to enjoy men, but refuses to involve her heart.

When she literally tumbles down a rabbit hole, she finds she has left her familiar home city of San Francisco. She has landed in a strange and beautiful world, where she meets a powerful and dominant shapeshifter, Jarronn, and his equally fierce and irresistible brothers.

By the draw of a card foretelling his kingdom's future, Jarronn has deliberately lured Alice to his realm in hopes of averting a terrible danger threatening his people. He has every intention of saving his kingdom with his and Alice's bond of passion, and nothing will stop him from making her his Queen of Hearts.

What listeners say about Taken by Passion: King of Hearts

Alice in Wonderland Fastfoward and a bit odd

The Alice in Wonderland concept seems very interesting but the story what is rushed, predictable, and a bit odd. The book failed to develop the characters and the plot. There are plenty of gratuitous sex scenes, but even those seems a little rushed. Overall it wasn't my favorite book in this genre.

If you like the whole Dom and Submissive, this is the one for you. I liked that their wasn't an information overload and gave just enough details for a good plot in between all the steamy scenes. I wish that bonding scene was even longer!
Narration was amazing. I have listened to Kelly Owen's before but under her different name. I loved her voice in the story. I feel like it wasn't rushed and really enjoyed the performance.

I have all of this series and they are wonderful reads. It’s great getting to hear them being read.

Submissive you must be!

Cute story but I hated how the dominants passed the submissive women around.

What does Kelly Owens bring to the story that you wouldn’t experience if you just read the book?

More choice for the women

Like listings to this book can't wait for the next book for the twin brother.

I loved the books from this series and have read them all. So I was very excited to see this in audible and was as good as a hope. I’m just hoping they are going to do the rest soon

what happened to consent.

sorry could not get past the forced everything.
Not my kind of story stopped listening. What happened to consent.