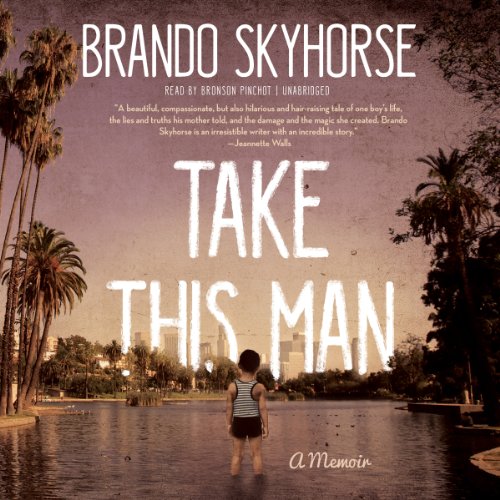 By: Brando Skyhorse
Narrated by: Bronson Pinchot
Try for $0.00

From PEN/Hemingway award winner Brando Skyhorse comes this stunning, heartfelt memoir in the vein of The Glass Castle or TheTender Bar, the true story of a boy's turbulent childhood growing up with five stepfathers and the mother who was determined to give her son everything but the truth.

When he was three years old, Brando Kelly Ulloa was abandoned by his Mexican father. His mother, Maria, dreaming of a more exciting life, saw no reason for her son to live his life as a Mexican just because he started out as one. The life of "Brando Skyhorse", the American Indian son of an incarcerated political activist, was about to begin.

Through a series of letters to Paul Skyhorse Johnson, a stranger in prison for armed robbery, Maria reinvents herself and her young son as American Indians in the colorful Mexican American neighborhood of Echo Park,California. There Brando and his mother live with his acerbic grandmother and a rotating cast of surrogate fathers. It will be over 30 years before Brando begins to untangle the truth of his own past, when a surprise discovery onlineleads him to his biological father at last.

From an acclaimed, prize-winning novelist celebrated for his"indelible storytelling" (O, The Oprah Magazine), this extraordinary literary memoir captures a son's single-minded search for a father wherever he can find one and is destined to become a classic.

What listeners say about Take This Man

The focus seemed off to me.

Look, it is a memoir. The story of the guy’s life. If I am disappointed, is it with the story or the life? His life is memoir worthy – no question! But they focus of the story seemed off to me. I had many questions about things he breezed right past and was bored to tears by the detail given about some situations. I guess I am disappointed with the editor.

I love to read memoirs, I enjoyed this book and Brandon Skyhorse’s story. This was an enjoyable and interesting read. The narrators voice was great.