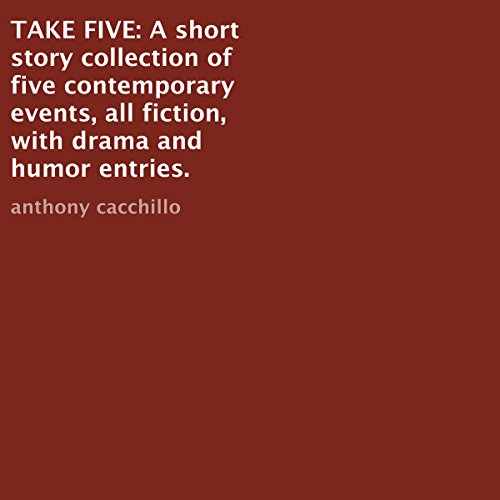 By: Anthony Cacchillo
Narrated by: Josh Brogadir
Try for $0.00

This is a short story collection of five contemporary events, all fiction, with drama and humor entries.

1. "Double Cross": A young woman is relocated by the Witness Protection Program to a position as hospital admission director in another state. But an assassin hired by her imprisoned husband, finds her. But when they meet, the unexpected happens.

2. "The Little Statue": An illegal Latino immigrant loses his job and becomes homeless, and lives on the street. A female police officer befriends him and tries to convince him to seek refuge on a cold snowy night. But unwilling to go to a shelter, and alone, he slowly freezes to death. But toward the end he, has a vision of his favorite saint, Our Lady of Guadalupe, and he becomes peaceful, serene, and joyful.

3. "Private Gagliardi Meets the Army": A young 19-year-old man, with an exceptionally high IQ, joins the US Army and befuddles his sergeant with his amazing knowledge. But as he solves problems with ease, his sergeant becomes jealous and plans to get back at him, which only back-fires as the unruffled private continues to astound his fellow soldiers.

4. "The Black and White Roses": A married couple buy a cemetery lot in their hometown, planning ahead for the future. But later, as they revisit the site, they are shocked to see bouquets of black and white roses laying on the lot. There is no note or any other indication of who might have left them, and they become increasingly fearful as other bouquets reappear each time the others are removed.

5. "Momma's Gonna Have a Baby": A 70-year-old widow is shocked to learn that she is pregnant at a routine medical examination by her doctor. After the fact settles in her mind, she becomes overjoyed at the news. However, her feelings are not shared by her two married daughters.

What listeners say about Take Five

Yes. The stories were told in an engaging and authentic way - one that allowed the listener to really dig in.

Which character – as performed by Josh Brogadir – was your favorite?

The husband in "The Black And White Roses" was so well done; I caught myself wondering if it was still Brogadir. So many of his characters have voices distinct from his own that it's easy to forget you're only listening to one person read.

These five stories have an authenticity reminiscent of Lake Wobegon. The narrator's voice pulls us into scenes from a hospital administrator in Wisconsin to memories of Mexico told by a homeless youth freezing in the night. The tales take unexpected twists as the listener leans into odd situations that resolve themselves in different ways. The stories told with genuine accents make for great listening!

These short stories are brought to life with some excellent narration. I loved all the voices for the different characters. Really fun and entertaining listen.

I throughly enjoyed listening to Josh Brogadir reading these short stories. They were interesting, and easy to listen to. Josh adds much to the stories as he uses Spanish when appropriate and really takes on the characters as he changes his presentation voice to reflect the characters mood and position in each story.
I highly recommend this narrator.

Loved the story about the private. The narrator did a great job with the different voices.

I absolutely loved the narration for these stories. The accents were great! Left me wanting more. I will definitely seek out more books narrated by josh Brogadir.