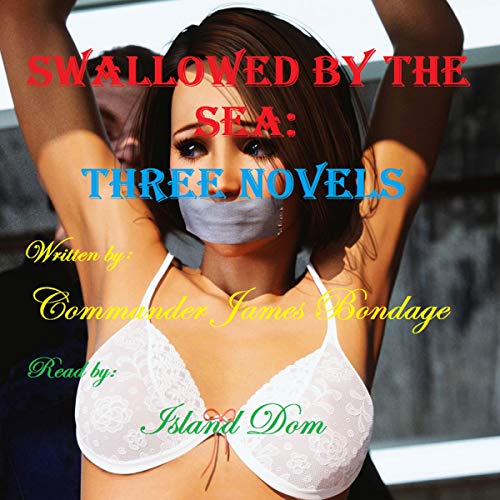 Swallowed by the Sea: Three Novels

By: Commander James Bondage
Narrated by: Island Dom
Try for $0.00

Mr. Stern's Island: The daughters of billionaire Charles Pennington and their tutor are rescued from their stricken yacht in a violent storm, only to find they have been abducted by their father's vengeful enemy, Robert Stern. Inside his secret island hideaway, to trains the girls as sex slaves, as plot of his plan for revenge.

Reunion: The Pennington girls' beautiful stepmother is caught in Stern's web, and she too is cruelly trained in her former lover's secret island hideaway to become another obedient sex toy.

Hostile Takeover: Stern abducts fellow billionaire Sidney Collins' wife and daughters at the latter's request, after Collins discovers the women had been planning to murder him for his fortune. Elinor, Juliette, and Gloria Collins are no more able to withstand Stern than the Penningtons, and are reduced to complete submission in their captor's dungeons.

What listeners say about Swallowed by the Sea: Three Novels

There is no messing around with Mr. Stern, a true sadist. It is an intense story of cruelty, humiliation and sadism but it is insanely titillating. I just wish I had read it, or the narrator had been better. My imagination would have been much better than the lacking emotions and silly voices of the narration. I would like to read other title from this author and see if I can handle him. Commander James Bondage is not for the faint of heart, but his creativity is worth exploring further.

Intense. Not for the faint of heart

This is the second title I've read by this author. Whereas much erotica is cute and light (even when there is a pretense of non-consent), Commander Bondage with Bondage, Domination, Sadism. Not just characters playing around. It's intense, and a little bit goes a long way. 5 stars!

Wow, this is a no holds barred book. I actually listened to the audiobook over about 10 days as it has so much sex in it. There’s no way I could listen in longer stints! If you like your books dirty and sexy this is for you.