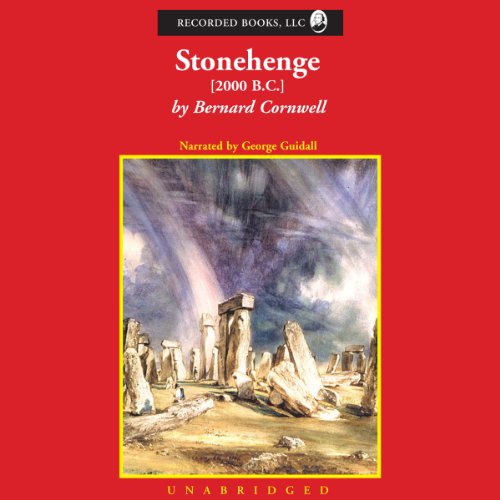 By: Bernard Cornwell
Narrated by: George Guidall
Try for $0.00

Best-selling author Bernard Cornwell received national acclaim for the historical drama of his Civil War series, the Starbuck Chronicles, which includes Rebel, Copperhead, and Battle Flag. Now, in Stonehenge, he creates a dramatic saga of one of greatest wonders of the ancient world.

Four thousand years ago, three brothers grow up in a land that is now Britain. One becomes a warrior, ruthless in his pursuit of gold and power. One is a mystic who sees visions of the future and hears the gods speak to him. Between them stands Sagan, the gentle brother who will dedicate his life to building a temple he hopes will bring health and peace to the land. As the giant stones are moved into their sacred pattern, Bernard Cornwell draws the listener into the conflicts of brother against brother, men against gods. Narrator George Guidall’s performance brings forth a world filled with the sights and sounds of bronze-age life.

What listeners say about Stonehenge

Another great example of historical fiction. Explains how Stonehenge could have happened in the context of society at that time.

If you want to believe in magic , or just the will of man, this book is for you. Absolutely amazing. Well read , and beautiful telling.

Save yourself the credit and the time. Not what I would expect from Bernard Cornwell. It is poorly written with an amateurish storyline. George Guidall, whom I normally really enjoy, fell short on accents and women's voices.

An excellent book and thanks for the historical note at the end. Brought my own visit to Stonehenge to life.

I have never read historical fiction based in a time so long ago. This story, based on one of the most fascinating prehistoric landmarks in Europe, had me captivated from the start. I have always enjoyed the storytelling of Bernard Cornwell, and this one meant all my expectations. George Guidall’s narration was superb. I hope to hear more from him in the future. I highly recommend!

I've tried to make my way thru this book but I just can't do it. I am more than 8 hours in and it's just not worth it. I've loved every Cornwell book I've read or listened to (gallows their, king Arthur ones, grail quest, etc and would give them nothing but 5/5s. Stonehenge kind of reminds me of when you have a paper due and just power thru it to hand something in and happy to get a "C".

I finished this one just because I have enjoyed his other books and devoroued the different series one after another. I struggled to have any feelings for any of the characters. I just kept hoping it would either get better or end, it ended before getting better.

Wonderful book. I love everything Bernard Cornwell writes but this one is special and unique for sure. Any lover of history will love this book!