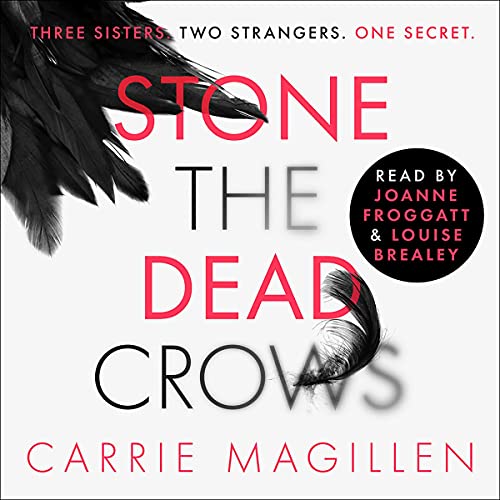 By: Carrie Magillen
Narrated by: Joanne Froggatt,Louise Brealey
Try for $0.00

From the number one best-selling author of When He’s Not Here comes a tense and twisting new heartstopper.

Maggie has an impossible choice. Stay and protect her family from the hooded stalker in the woods? Or return to Rose and help her fight the doctors who want to remove life support from their sister, Daisy?

There’s a man at Daisy’s bedside. He says Rose can trust him. But he's telling her disturbing things about her devoted new husband that can’t possibly be true.

The countdown has begun.

With outstanding performances from:

Stone the Dead Crows will leave you breathless.

"Just what the psychological thriller market needs to shake things up a bit. And, of course, I’m a little in love with Saeed as I suspect everyone will be." (Sunday Times best-selling author Elizabeth Haynes)

What listeners say about Stone the Dead Crows

I loved every second of the book. The narration was fantastic, the story was thrilling and I didn’t want it to end.

This is a tough one to rate. On an enjoyability scale, I'd give it a four. It's quick paced and kept me wanting to know what would happen next. I also really enjoyed the quaintness of her descriptions and all the British details - it felt cozy. Not to mention the Audible narrators were perfect!

But here's where I struggled. The two narrator perspectives (the characters, not audio narrators) felt very disjointed and the connection between them didn't make any sense until the very end. There were also numerous details throughout the book that I could tell were emphasized for some reason, but felt arbitrary and confusing at the initial mention until the ending brought things together. (No spoilers) the end was twisty and creative, so I enjoyed that, but it was also hard to follow at times.

On top of that, a lot of things were a stretch and were just distractingly unbelievable. And one of the characters was extremely frustrating. She could supposedly notice subtle things like a "shadow crossing someone's face", yet she doesn't notice any of the massive red flags in her relationship. And she's had a previous relationship full of these same red flags, which ended horribly, so she'd definitely be on the lookout to avoid repeating the past.

All in all, I'd give it a 3 and I'll still check out some of her other books.

Beautifully Written - will stick with you ...

As I said above, this is a beautifully written story -- the characters feel so real. Most you want to root for, but one you just want to pull into a back alley and beat the crap out of. Naturally, he was written that way, but still ... The story slowly builds to a twist that many won't see coming. This book had all the feels and will stick with me for a while.

The narration is top-notch as well --

All in all, well worth the time to listen to.

I loved this audio book. The story was fast-paced and exciting, the characters were fully believable and the twist blew my mind. Also, really enjoyed the voice actors who read the story. Highly recommend!

in-depth writing on human behaviour and relationships, great turns along the way. A must read.