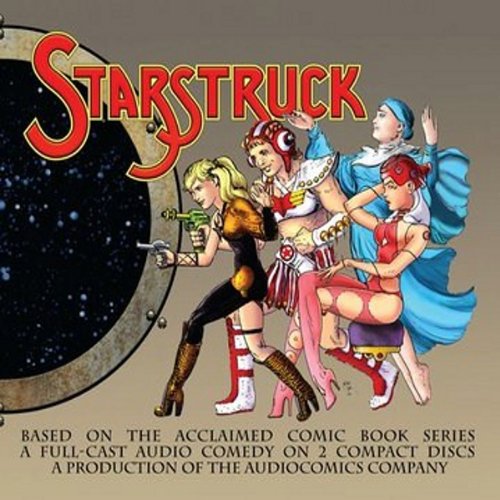 In a far-flung future, Captain Galatia 9 and the crew of the Harpy are on a mission for the United Federation of Female Freedom Fighters. When they run into a living ship inhabited by a team of galactic evildoers, including Galatia's insidious sister Verloona Ti, the outcome of the battle may well decide the fate of the free universe. Adapted from the play that became a comic book masterpiece, Starstruck is a spine-tingling joy-ride to the far side of the spiral arm!

"Noted cartoonist Scott McCloud once wrote about the gutter spaces between comic book panels inviting the reader to fill in the blanks, so to speak, and this 'audio movie' absolutely possesses that exact same pull. In defense of audio dramas, having heard this work I just don't think even a live-action film version could do as much justice to the imagination eased out from the mind by this brilliance." ( The Lottery Party)
"It's loud, it's raucous, it's baffling, sexy, hilarious, and so much more - in short, it's 'Starstruck.' And its not to be missed." ( The Danger Digest)

What listeners say about Starstruck

I understand it's supposed to be an audio comic book but the constant over-the-top acting becomes oppressive after a while.