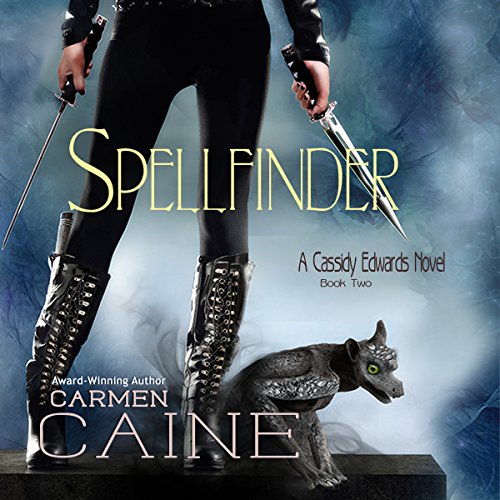 By: Carmen Caine
Narrated by: Lynn Devereux
Try for $0.00

The sequel to Monster, from award-winning and bestselling author Carmen Caine!

Revenge. Until now, my revenge was more of an idea. A fantasy. A mere whisper of what revenge should be. But it was a seed - and it was time for it to sprout.

My name is Cassidy. Cassidy Edwards. And I'm the first of my kind.

The job: Hunting a mysterious force attacking the House of Rowle with spells of the most malevolent, arachnid kind.

The players: A wickedly handsome warlock-of-a-boss, a hostile Nether Reach Keeper hell-bent on my arrest, and a vampire who just might believe that he's my father.

My problem: As my new Spellfinding gig plunges me deeper into the world of the Charmed Mafia, destiny presents the king of all conflicts, forcing me to walk a tightrope of lust and betrayal as the monster inside me awakens.

What listeners say about Spellfinder

A very entertaining audiobook. The narrator does a fantastic job with the characters making it a very enjoyable story. I really like seeing what is happening with Cassidy and all the other characters, but I still find her very naive and annoying because of it. I hope to see in as the series goes on she learns quickly and changes her behavior.

This was hard to finish

I am listening to this series for free in exchange for honest reviews. The first book was okay. This one was less than okay. I found myself speeding it up more and more through the book to finish it. I realized I couldn’t have cared less what happened to any of the characters. And had no desire to find out how it ended. Which is not good. Ever. Because why even listen? Most books I am usually very, if not entirely, emotionally invested in the characters of the story. This was lacking something huge. The plot was a mess. The characters bland, the main character, Cassidy, I found very immature and I just could not understand her profound thirst for revenge. She wants to avenge her mother, who couldn’t give two shits about Cassidy, and so far in the series she treats her like scum, again and again. I almost feel like her revenge was thrown in there to give her some sort of motive that really doesn’t seem to truly matter or play a big part in the plot. I have the rest of the books to listen to and i am very much hoping that they get better because otherwise, this is going to be a looooong process.

On another note, I also found the narrative hard to listen to. Not exactly the narrator herself, but the quality. I could hear a constant buzz that came in and out of focus that became increasingly annoying. I also noticed a pause in said buzz as the narrator took what I assume is breaks and then it resumed.

Wow. This series is getting better and better. I absolutely enjoyed listening to this audiobook. OhMgee. I’m really loving Cassidy, she is one Awesome chick. I’m having conflicting emotions for Lucien and Dorian. I’m excited for audiobook 3.

This series gets better and better!

Another enjoyable story. Full of action and drama as well as suspense. I love all of the elements coming into play here. We are finding out more and more about Cassidys origins in here. We learned a bit in the last book. But in here it gets delved Into more deeply. I love the banter between Cassidy and other characters. Her and Tabitha start having issues. And Ricky is charming as always

The deeper she gets in the harder it will be for her to get out of this pickle she seems to have found herself. I love the back and forth between Tension Lucian and Cassidy.

I listened to this on audio. Lynn Devereux Does an amazing job! Her voices for these characters are strong and she doesn’t waver. I know each character whey they talk by the voices she is using. Superb!

Love this series so far. Had to speed up narration to get through it. I love the story line and cant wait to get to book 3 and continue Cassidy’s journey.

Story is getting exciting. Cassidy is still out for revenge and it seems she wants it at any cost. I don’t get half the things she does. Which is understandable, she’s confused and trying to get by in a world she really knows little about. She’s definitely not my favorite character but there are plenty of other great ones in this story.

it was pure greatness, awesomeness, and loved this book. narrator of this book breathtaking. Thank you.

narrator needs more emotion in her reading :( it's very monotone and lack luster at best.

A great story that I wanted to immediately order and download the next book but apparently not available for audible.. She frustrates you wish sexual undertones between the warlock and Cassidy. Just when you think they might get together or have a chance Cassidy stops or steps away. I'm hoping she and Lucien will end up together! It is interesting with all the different character that make up the group. I guess I will just have to read the next ones.

This one is so very enjoyable I loved revisiting the main characters again and seeing new characters turning up. I always enjoy when there is a splash of humour in a book as well. This book did it so very well.

Loved it. Second one in a serie and a very enjoyable story to listen to. All my favourite characters are back and their adventure continues. It's very humorous at times. The narrator did a great job.

while the story and narrator are fab the quality of the editing of the audiobook leaves something to be desired. background noise (as if noise gate not activated) at times and omissions by the audio editor, like narrator starting sentence, stopping and starting again. 95% there but 5% missing to perfection.