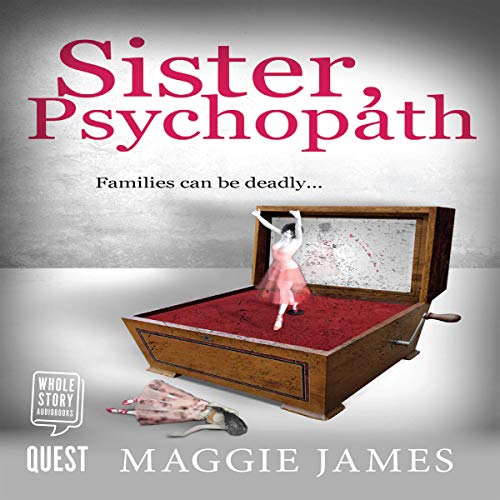 By: Maggie James
Narrated by: Katie Scarfe
Try for $0.00

When they were children, Megan adored her younger sister, Chloe. Now she can’t bear to be in the same room as her. Megan believes Chloe is a psychopath, and her sister does appear to be a textbook case: cold, cruel and lacking in empathy.

Why does Chloe want to taunt Megan at every opportunity? And why does she persist in manipulating their mentally ill mother, Tilly?

When Tilly, under Chloe’s malignant influence, becomes dangerously unstable, the consequences are ugly. Megan’s world falls apart. Her sister’s out of control, and there’s little she can do about it. Until Chloe’s actions threaten the safety of Megan’s former lover. A man from whom she has kept an important secret...

A study of sibling rivalry and dysfunctional relationships, Sister, Psychopath tells the story of one woman’s struggle to survive the damage inflicted by her own flesh and blood.

What listeners say about Sister, Psychopath

WOW, WOW,WOW. Amazing, awesome psychological thriller at it's finest! I would give this one 10 stars if I could. Author did an excellent job writing this story. So many OMG moments. Narrator did a superb job. Don't pass this one by. It has everything you want in an awesome book. 😀😀😀😀

NO SPOILER REVIEW! This book had potential and yes there are some surpises that you won't see coming however the surprises are implausible. The story is not cohesive with a totally ridiculous outcome. I love mysteries but the outcome has to make sense. Also, the author was not very imaginative with her plot. I'm just not impressed at all.

Not thrilled and somewhat disappointed

I tried to like this book and kept waiting for the edge of my seat parts. I had trouble keeping focus while listening and almost had trouble finishing. I felt the story dragged on!

Not overly thrilled with story, but the ending was enjoyable and unexpected. The voice of the Chloe was irritating and unbelievable throughout, but easy enough listening overall. Not one to find traffic jams for!