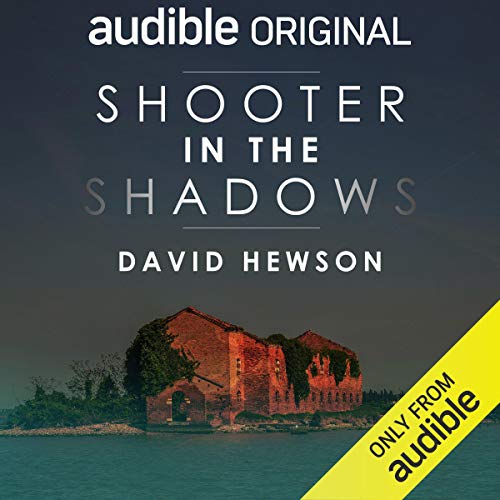 Shooter in the Shadows

Tom Honeyman made his name cracking a horrific double murder in his hometown of Prosper, New York. He got an international best seller out of it, made a small fortune, and left his newspaper reporting days behind.

But was it all based on a lie?

Now, more than a decade after his one and only success, Honeyman’s life is in tatters. His wife committed suicide, his daughter hasn’t spoken to him in years, and his books don’t sell. He’s sequestered himself in his wreck of a retreat on an island in Venice, desperate to find the inspiration that will revive his career.

But Tom Honeyman is not alone.

An unseen stranger tells Honeyman he got it wrong all those years ago. And he has just four days to uncover the real murderer.

"Hewson does a good job balancing action and characterization. Readers who appreciate nail-biting suspense will be satisfied." (Publishers Weekly)

What listeners say about Shooter in the Shadows

,very clever story with major twists at the end

Very clever and original story with several unexpected twists. What kept me from giving it the 5th ster was the narrator. A bit over the top with one character and sounding like a the son from Family Guy with another.

A very contrived story line at best. Not my type of book. Maybe for someone else.

First chapter starts slow and I almost regretted buying this book. but once it gets to chapter 2, story is very gripping and easy to follow.
I would recommend it.

This story was so captivating and you get lost in the emotions of the characters. So many events defiently kept me guessing and wanting to know more. Amazing narrator, and voice acting just in awe with this awesome story!!

THIS HAS A WTF ENDING! I want to choke someone! I caught on but didn't expect this!

Enjoyed this very much!! Thought I had it figured out but was I surprised!! Highly recommend 😊

When I first started this book I wasn't sure I would stick with it. The first chapter is long and contains alot of detail. But once I got to Chapter 2, I was hooked.

This story had so many twists and turns, I was spellbound. I thought I had it all figured out (and I did, partially), but the ending was more suspenseful than I thought.

I consider this a Must Read.

LOVED IT. Narration was great. Kept spellbound on the edge of my seat. GREAT

normally I like David Hewson books, but I found this horrible! I couldn't engage with characters or story.

Shooter in the Shadows is in quite a few ways cleverly done. Tom Honeyman, a one hit wonder author returns to his lonely Venetian Isle to try and rescue his career. The story splits mainly between his time on the island, which as you can imagine doesn't turn out to be the peaceful hideaway that he hoped for and back in the story of his first book. That being a true crime novel of his home town Prosper when two locals were killed in a quite horrific manner.

There is quite a lot that I enjoyed the book. The dual narration team of Jonathan Davis and Ramon de Ocampo work very well in tandem backed up by some very minimalist sound effects. I won't explain quite how as it would lead to spoilers but I got the impression that both put their all into this and raised the story up considerably.

The story itself is by no means a bad one but it never really quite held together in some ways and when you write it from a character's POV it irks me that he at times seems ignorant of knowledge that we later discover he has. It does have some dramatic twists in it but it seemed to me that when it came to the ending Hewson had three or four favourite endings and ended trying to push at all of them as it continually twisted. Perhaps a little less would have been more.

So, a slightly muddled story in my view that still has some merit and an excellent team performance for the narration that raised it above the mediocre.

Sorry this is really spoiling the Audible version, was it really necessary to include that awful bleep everytime the kidnapper speaks? It is sooo annoying the automated voice would have been enough... I will comment further if I can make it through to the end!

Wasn't sure at first but very soon gripped and kept in suspense to the end.

This was the first time I have listened to this author and I was not disappointed. Clever twists and turns. Great narrator. Highly recommended.

A twisty listen. Good plot and believable characters. Well worth a listen. Excellent narrating and I’m not fond of more than one narrator