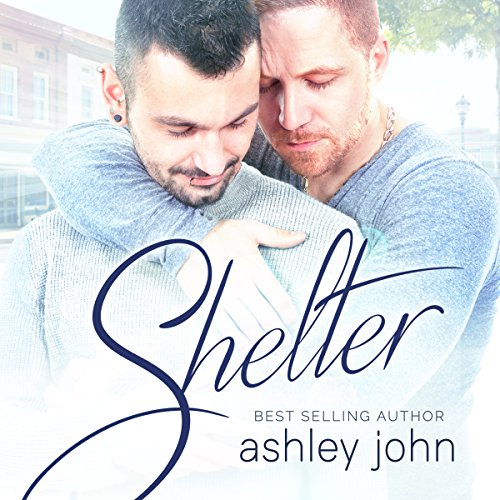 By: Ashley John
Narrated by: Derrick McClain
Try for $0.00

Fresh from his fourth stint in rehab, Elias James doesn't have much to live for. His relationship with his family has never been so strained and with no real life of his own, he has nothing to live for. His overachieving twin sister and his ruthless mother's political success as mayor of Havenmoore have left him empty. Getting high started as an act of rebellion, but the addiction soon controlled his every waking moment.

Aspiring writer Caden Walker thought he had the perfect life until he discovered his boyfriend in bed with his best friend. Leaving everything behind in New York, he returns to Havenmoore to re-evaluate his life from his parent's guest bedroom. When his mom offers him a job working for the charity she runs, helping people struggling with addiction, he's not in a position to turn it down.

Caden never expected to find what he did, but when he is assigned to work with Elias, a reluctant attraction quickly blossoms into something deeper. Can Elias find in Caden the one thing he's always searched for or will his addiction drag him under once again? Is Caden ready to let go of his New York dream to take a chance on something unexpected? Both men are faced with difficult times of change, but can they make it through the storm to find the shelter?

What listeners say about Shelter

I really enjoyed this book. I had a little drama with a lot of love.. Just great..

This was a great book I could fill the struggle the main character was going through the narrator was superb.

Sweet but unintentional Funny at times

The story is good and overall i liked it. It does have some flaws (like a extremely Young Well-established family doctor, she must have skipped like 6-10grades). The Funny part is that both MCs Seem to suffer from the same character flaw, because they both Seem to have the attention span of a goldfish. They go of to do something EXRTEMELY important ("i have to find him, what if he is dead - uh theres my ex, let me go have coffees with him" kind of situations) and ends up doing something Else for an hour or Two. The mother is EVIL MAJOR and i do Think that she should have had some redeeming qualities or have suffered an entirely different fate Than she did. But looking past this, the story is a sweet love story that i enjoyed

Elias is an addict. His last stint in rehab is court ordered when he almost died of an overdose. He blames his mother’s lack of love for his addiction and his sister for being “too perfect”. He’s 26 and lived most of his life under the influence and on the streets. His twin sister, Ellie, is the town’s perfect doctor with a thriving practice. His mother is the town’s mayor and his father died before he was born.

This time around his mother has set him up with an apartment and a counseling plan. This is where he meets Caden.

Caden is a writer from New York who is trying to work on his novel while taking a break in Maine to work for his mother’s rehab program.

Though the two have no business doing it, they fall in live while working with one another. This causes no end of troubles for the two and threatens to de-rail both of their mother’s careers.

**
Elias is one of those characters who make your heart bleed. He’s been beat down over and over and his only coping mechanism has been drugs. Now that he’s older it’s time for him to find an alternate way to deal and Caden is there to show him the way.

Caden has his own life to sort out and his own “self” to find and by helping Elias he finds himself, too.

Of course Elias’ mother is truly evil and she stands for all that is wrong in the world. Ellie is somewhere in the middle – not without her own flaws.

Though there are some plot issues (ie Ellie being an established doctor at 26, Caden so willing to get involved with Elias, Elias being a bit self-involved) the majority of this book is very touching and rewarding.

If you’re in the mood for a good hurt/comfort book, this is the one to turn to.

Derrick McClain does another excellent job of narrating this beautiful story. He’s so good with emotion and at pacing the dialog.