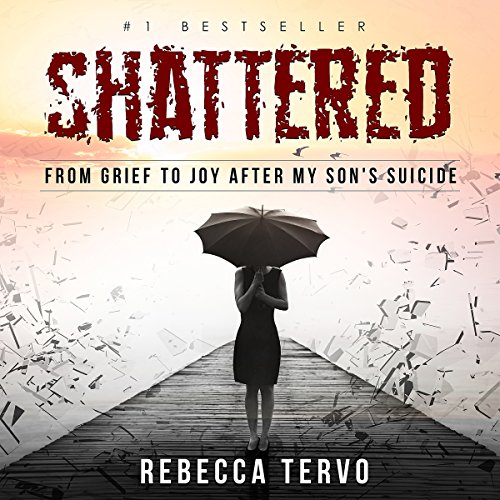 By: Rebecca Tervo
Narrated by: Katie Welburn
Try for $0.00

When Rebecca Tervo awoke on January 29, 2012, it seemed like just another lazy Sunday morning. What she didn't realize was that her life and the life of her family had already been changed forever. Her 17-year-old son, Trevor, was already dead of suicide in an adjacent room, she just didn't know it yet.

The shock of another teen suicide was felt throughout the community and the schools.

This book tells how Rebecca reacted to the event that changed everything for her and her family. It was uncharted territory for her, her husband, the community and the school.

It describes the unrelenting and nearly unbearable grief and loss. There were so many questions and so few answers. Why would Trevor do this? Where were the signs that Trevor had been depressed? Did someone else know something about Trevor's pain? Why would such a bright young man choose this?

How would she go on? She had so many unanswered questions. How would she care for her other three children and her grief-stricken husband? How would her 20+ year marriage survive the biggest trial it had ever faced?

These issues and the grieving process she lived through are all laid out with raw honesty, but are told as if she was sitting with you on the front porch with a cup of coffee.

After experiencing all the stages of grief and despite everything, Rebecca finds a way to dig her way back to life. She chooses to live a life with more happiness and purpose than ever before. This book tells how she uses various support groups and therapy sessions to cope, but ultimately does some major work on her own to enter life again.

Not as the same woman, but a new, more conscious and mindful mother, wife and friend. She depicts how her personal transformation helped her make the decision to leave her accounting career, lose weight, do major decluttering and forgiveness work, and set some big goals for her life.

What listeners say about Shattered

I liked the clear and simple honesty.
While listening I heard out loud, my exact thoughts and feelings after losing my son to suicide. I loved being a mom, loved my beautiful son.
Realizing I was not crazy, why I was so angry and confused about my perceived failings in life and not being the kind of person I thought I should be after he died, was overwhelming.
Listening to this book will help release me from guilt and hopefully bring a sense of joy back into living.
There was nothing else I could do under this unbearable pain but survive. So grateful I made it through without doing something devastating, it was a close call for me through the trauma.
Today I feel so grateful, everything positive, like this book, keeps me moving forward.
Thank you for taking time to write this book,
Dawna

We lost our beautifully brilliant 19 yo son to depression. We knew Jon was suicidal and had a plan. we tried to get him help and were unable to save him

In this book the author talked about so many of the same emotions I have experienced. It was so helpful to hear that I am not alone aha that I am not crazy.

I'm looking forward to trying tapping. I had heard of it but had not thought that it might be helpful. I feel like I am where the author was in my grief before she started tapping and am ready to try something new.

this book had a lot of similarities to my own life and feelings and it resonated with my heart. I will listen again

a heart-breaking yet comforting book

The son of a friend just committed suicide last week. This book helped me a lot in understanding that perhaps no one could have made a difference to this young man who was 15 when he took his life. I thought about taking my own life off and on throughout my growing up years; but more so between the ages of 16 and 18, when I was in a very deep depression. I did not understand that I had a problem, nor did anyone else. The first time I considered suicide was when I was 5 years old, walking to school. I wanted to run in front of a car and get hit and die - only I was afraid I would only be injured and not die. This stopped me on other occasions also. When I was in my teens the only one thing stopped me - my love for my two younger brothers. I knew it would destroy them, and I loved them more than my own desire to escape the depression I was in.

The floodgates of emotion was opened within me by Rebecca’s story. I’ve never experienced suicide but it doesn’t matter. I hope that after listening to this book I’ll have a better sense of compassion for those who have as well as additional options for recovering from trauma.

Rebecca takes you right into the heart of her pain and step by step process of rebuilding. Incredibly inspiring and amazingly valuable insight for anyone facing tragedy or challenge of any degree.