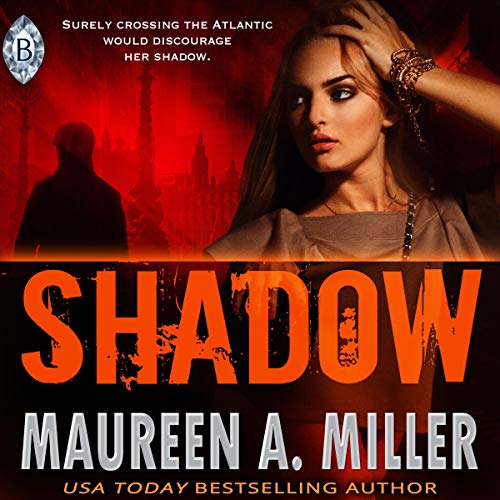 By: Maureen A. Miller
Narrated by: Brandy Skelly
Try for $0.00

From USA Today best-selling author Maureen A. Miller comes this romantic thriller that spans the Atlantic.

Sophie Diem's boss has skipped town, abandoning their counseling firm and taking her investment money with him. As she seeks to rebuild her professional career, she is distressed by the appearance of a stranger. The man keeps to the shadows, but he is definitely stalking her.

In an attempt to flee him, she accepts a job offer...in London. Surely, crossing the Atlantic would be enough to deter her shadow.

Glenn Barber is a desperate man. He sorely wants answers. The man who can supply them has gone missing, though. Now, all Glenn can do is go after the next best thing: the man's former employee, Sophie Diem.

Sophie is shocked to spot her shadow in London. What she learns is that Glenn, the shadow, is not a stalker but rather her only protection.

As her attraction to Glenn grows, together, they conspire to locate her former boss and stop him before he can harm others.

What listeners say about Shadow

Shadow by Maureen A Miller kept me engrossed. The premise of a business partner taking off with everything is what nightmares are made of. The author was great building suspense in the story, and the romance was the right steam. I enjoy a slow burn romance, and this one was perfect. Brandy Skelly is a new narrator to me. She did great with her distinguishable characters, yet sounded very young (or I'm getting too old). I will definitely listen to more books by this author and narrator.

Enjoyed this book! Good amount of suspense, and great narration.
I received a free copy of this book and am leaving an unbiased honest review.

Shadow has all the pieces for an engaging story

In SHADOW, by Maureen A. Miller, wonderful layers of mystery stack up as the reader dives deeper into the story. As one mystery unfolds, another comes to light; questions get answered, but new ones arise to keep reader curiosity fully piqued.

But it’s not just the mystery element that will keep readers reading (or reading with their ears, like me). Miller has all the right pieces for an engaging story: suspense, danger, romance, and even international travel. But for me, it is the characters that make the story work.

“Her age was just an exclamation point on a wasted decade.”

It is a nice change of pace that the protagonist, Sophie, is in her early thirties. Like many women in that age range, she is grappling with the decisions she’s made, where she is now, and what she’s done with her life. She knows it’s time for a change, and the presence of a stalker is the final straw for her to get out of Dodge. Sophie is complex, and readers may be quick to judge her actions regarding the stalker unless they put credence in the power of women’s intuition and instinct. (I do.)

By providing dual points-of-view, Miller gives readers the other side of the story – Glenn is not a stalker, he’s a desperate and broken man searching for answers. Hearing Glenn’s thoughts and feelings completely switched how I felt about him, and his motives became understandable. Glenn’s is an equally complex character, and his struggle to find himself worthy of love or happiness is palpable.

What’s going on with Sophie and Glenn gets heavy, as is the building sexual tension between them, so the scenes including the characters of Amanda and Sam are excellent distractions. Amanda is the elegant and enigmatic boss of Blue-Link, Sophie’s London-based employer. I feel like there’s something more to her than we’re allowed to see in SHADOW, and honestly, this piece is a major driver for my wanting to read the next book in the series. On the opposite side of the spectrum is the character of Sam, who provides what Sophie -- and readers -- need: a lovable, quirky, comical, steadfast friend and protector. He’s really Sophie’s hero, too.

Odd as it may seem, bad guy Nathan really isn’t much of a thing. He is a presence because he’s wrecked so many lives, but there isn’t much build-up and it’s a bit anti-climactic when he makes his inevitable appearance. Sam is the scene-stealer there, but I fear he won’t be a recurring character based on the ending of the story.

The ending does bring about a satisfying resolution, but I am not sure about the direction of the series and whether the same characters will continue to be featured. I can’t see how Sophie’s and Glenn’s stories would have anything left beyond romance and the challenges of a new relationship, but there’s something about the Blue-Link company…

There are some minor plot holes, a few places that behaviors/reactions didn’t seem reasonable, and some bits of peculiar dialogue (including some F-bombs that seemed unnecessary and incongruous with the character). But overall, I recommend the audio book of SHADOW as an entertaining escape into an intriguing story line. Listening to it was time well spent.

ABOUT THE NARRATION: This is the second book I’ve heard narrated by Brandy Skelly, and I am happy that her delivery was much more consistent and cleaner than last time. I listened to the book at regular speed, which is a rarity, but Skelly’s pacing was just right. Her voicing of characters, male and female, was good and she made it easy to distinguish them. And while Sam’s British accent worked, Amanda’s was less authentic. Even so, by book’s end, I had adapted and accepted it as her voice. Technically speaking, this was a much better recording than the last of Miller’s books I listened to; however, there was a sizable glitch about an hour in that had a long stutter and then several seconds of silence.

Thank you to the author and Audiobookworm Promotions for providing me an audio download in exchange for my honest opinion – the only kind I give.

Sophie's partner has left, taking everything with him. As she is cleaning up messes, referring clients to other places, she is trying to get her own life back on track. But there is a man who has begun to stalk her. He shows up out of nowhere and wants to know where her partner Nathan is. Now taking a job in London to start her life over again, she feels that she is safe from this man. Until she is not! What does he want? Can she help him? I love a good romantic suspense, and this book has it all. Maureen A Miller wrote this romantic suspense with the word thriller involved! It's full of a constant fear of this man until, and the wonder of who he is as well as the wondering what Nathan had done! The character of Sophie has an inner strength, is very smart and wants the truth for all involved, including herself. It's a wonderfully written, slow burn and kept me involved for the entire listen.

Brandy Skelly is a new narrator to me. She was a little young sounding for the characters to me. Her voices were easily distinguishable and her pace is perfect. I did enjoy the suspense and emotional buildup she created while narrating and thought overall it was a good performance.

Psychologist Sophie Dean is left to clean ip after her business partner disappears with all of their money. While she refers patients to other counselors and cleans out the office, she is constantly approached by a man asking for her former partner, Nathan. Regardless of her insistence that she has no clue what has become of Nathan, the man has become her shadow...he shows up everywhere, asking the same question...where is Nathan. When the only job offer comes from a company in London, for an HR position, Sophie jumps at the chance fir a fresh start. Surely she is safe from the Shadow. When Sophie is hit by a cab, she wakes to find her Shadow, now known as Glen, has been sitting by her bedside for the 3 days that she’s been in the hospital. From her research into her former partner’s patient files, Sophie has deduced that Glen is the father of a patient who had committed suicide 2 yrs ago. Now Sophie and Glen team up to find Nathan. This story was so captivating that I stayed up past bedtime to complete! Who doesn’t like a thriller with quirky characters and some romance? Great HEA.
I was given this free review copy audiobook at my request and have voluntarily left this review.

One man on the run. One man looking for answers. One woman trapped between the both of them, shadowed by the consequences of their actions. What would you do if you had someone following you everywhere? Not showing themselves, only staying in the shadows, asking the same thing over and over? Would you think him dangerous? Would you think him psychotic? Would tall, dark and handsome fall into any of those categories? Miller has spun a story around a mystery that takes place within the States, but ends all the way across the Atlantic.

Sophie Diem worked at a counseling firm until two months ago, her boss up and disappearing without a trace. That is right around the time that she obtained a permanent shadow affixed to her ankles, one without a name or a face—at first. Always approaching her and asking odd questions about the whereabouts of her employer, she was frightened to engage in any conversation with him. Coming back time and time again, Sophie’s bravado strengthening as time passed, until his persistence was unavoidable. A burned down storage facility of hers, objects in her apartment moved around, and a major accident landing her in the hospital with a head injury. Finding that her fright is lessening, Sophie finally succumbs to curiosity. Would this man’s tale be worth the fear, the anger, and the irrational thoughts about who he is? Would this man have a good reason for following her all the way to London? More importantly, thinking through her past conversations with her previous boss, can she have more information than she originally knew about? Uncovering secrets can be a dangerous game and Sophie has just started playing.

Miller’s story-line is good and has the ability to be a great story; however, there is an over-indulgence of detail. By over-indulgence, this terminology for the story is referring to “excess adjectives to describe scenes, people and places over the expanse of the story”. The pace is fairly slow and the character development has been well-thought out. Since this review is assessing the audiobook, Skelly’s vocal relay could not have been any farther from the mark. Unfortunately, this narrator did not speak in proper accents, nor did she provide adequate pronunciations for various word choices used throughout the story. Choosing a narrator that fits the “feel” and has the knowledge of terminology within the story is paramount because these factors can make or break the story. This is the first installment within the Blue-Link Series. If you are a reader of Romantic Suspense, you find reading this book of interest to you.

An audiobook was provided to Turning Another Page by Audiobookworm Promotions and in no way affects the honesty of this review. We provide a three-star rating to Shadow by Maureen A Miller.