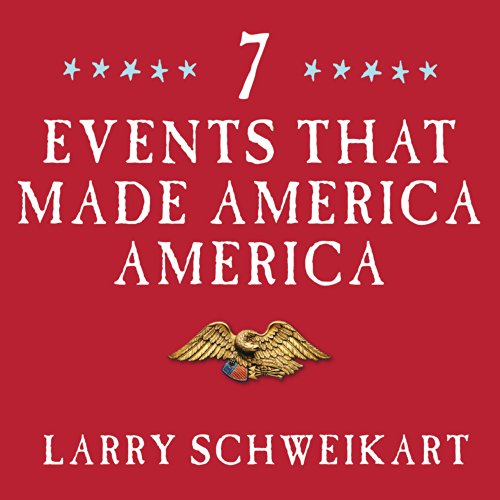 Seven Events That Made America America

By: Larry Schweikart
Narrated by: Peter Berkrot
Try for $0.00

Every schoolchild is taught the great turning points in American history, such as Gettysburg, Pearl Harbor, the Kennedy assassination, and 9/11. But other, equally significant events have altered our destiny without being understood - or even widely noticed. Acclaimed conservative historian Larry Schweikart now takes an in-depth look at seven such episodes and reveals the profound ways they have shaped America. He also asks listeners to reconsider them not just in terms of what happened but in light of the Founding Fathers' vision for our nation. What would Washington, Jefferson, or Madison have said about these events?

In the same accessible style of his previous best sellers - A Patriot's History of the United States and 48 Liberal Lies About American History - Professor Schweikart doesn't merely recount our history; he forces us to rethink what makes our country great. He shows how individual liberty, private enterprise, and small government helped build a free and prosperous nation. Conversely, whenever these values have been threatened by big government, oppressive taxes, and special interests, we lose sight of the principles that made us strong. You'll be surprised to learn how these events spurred sweeping changes that still affect us today.

In this time of national uncertainty, it has never been more important for Americans to understand what has shaped our national destiny. This provocative book will enlighten anyone looking for clarity about our past and inspiration for our future.

"A welcome, refreshing, and solid contribution to relearning what we have forgotten and remembering why this nation is good and worth defending." ( National Review)

What listeners say about Seven Events That Made America America

This is a great book! it shows how there has been a subtle domino effect thought out American history. All those little events lead us to where we are now. This is an interesting and entertaining eye opener.
I like the fact that the author did not lean left or right.
The the guy who said this book had a right wing slant; all I can say is this is the first time I heard it explained that Reagan screwed up, and that screw up lead to 9-11

Would you listen to Seven Events That Made America America again? Why?

These are events that are key to understanding where we are, how we got here and how terribly easy it would be to lose what we consider to be the most valuable aspect of our ability to create the lives we want for our families.

The clear defining of the reality that what we now have is an absolute abnormality in the experience of humans. 2-5% of human kind have had the freedom we have had and that only in the last couple of centuries - but we seem to somehow think this is the norm. It is not, nor is it likely to continue untended by energetic human endeavor.

It should make anyone cry if they love individual freedom.

Should be required reading in order to get a GED or better.

Quite a perspective! An eye opener for old bookworms of history and young fans of rock music.

I learned so much from this book. It made connections I would never have made on my own.

I really enjoy history explained by Larry Schweikart. He brings detail and history together that makes an enjoyable read/listen. I recommend this book to anybody interested in history and anybody that is interested in the Founding Father principles.

Why ISN"T THIS IN THE HISTORY BOOKS?

Reality is only known by a few. This opens up what really happened and where it took us. Excellent read, captivating. Highly recommended for any red blooded American. Should be a required reading history book at the college level.

Wish I had read the description more thoroughly

I expected an in depth and academic look at forgotten and interesting events in our nation's history. Instead, I found that this book is little more than a 10 hour right wing rant. I can't believe I finished the whole thing, but then, I'd already wasted an audible credit and wouldn't have had anything else to listen to.

Just one example of what I mean, in Chapter 7 he describes Fox News as the only fair and balanced T.V. news source left. There is nothing more to say.

For a much better history lesson look at "Lies My Teacher Told Me" by James Loewen.

couldn't finish, boring and dry. I'm someone who loves history, but I guess I need it in more of a story than just names, places, and facts.

Liberty lost. Never to be recovered.

Excellently done. If Americans were educated enough to understand how much liberty they have lost, a rebellion would take place at the ballot box. There is only one solution, The Article V Convention of States.

interesting but definitely not impartial