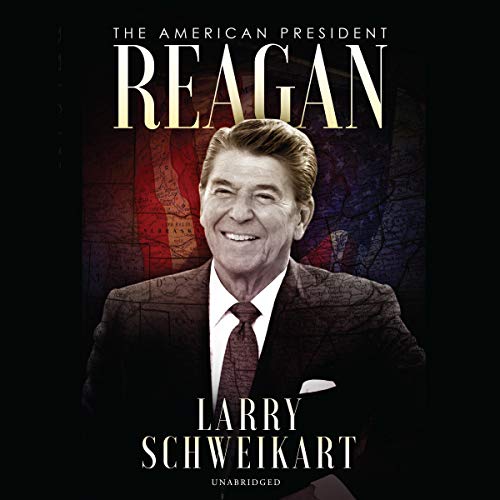 By: Larry Schweikart
Narrated by: Robert Scott
Try for $0.00

The definitive biography of Ronald Reagan, featuring never-before-seen documents and sources from the Reagan Presidential Library

Number-one New York Times best-selling author Larry Schweikart, armed with previously unseen sources from Ronald Reagan's Presidential Library, uncovers the most important president of the 20th century and details the life and policies of a man who still remains dear to the hearts of Americans. From his time as a lifeguard in Illinois to a sports announcer to a rising actor to a labor union leader, then finally governor of California in the tumultuous 1960s and ultimately President, Reagan's life is told as it has never been before.

What listeners say about Reagan

Dr. Schweikart has an amazing ability to put the listener in the room with Ronald Reagan, whether it's a schoolroom in his early years, the negotiating room as the Screen Actors Guild boss, or the Oval Office as the 40th President of the United States. Having come of age during Reagan's first term, this tremendous biography helped me connect dots that were always a bit murky for me.

Larry does a great job of explaining and documenting details that helped illustrate why Reagan made certain decisions. The book doesn't sugar coat the places in history where Reagan made mistakes. Unlike fawning acolytes or relentless naysayers, Schweikart seems to play it down the middle and help us really go deep into the mind of "Dutch." This style helps clarify Nancy's role and those of his closest advisors.

Most importantly, I now have a clearer picture of how Reagan's influence shaped America for decades to come. I also found the epilogue explaining the similarities and unique differences with Donald Trump very enlightening.

Best About Reagan in Decades

First of all the narration is well above average and I have listened to over 250 hours of other audible books.

The insight into specific Presidential Papers shows the expertise of an actual historian. The author nails the impact of RR’s personal diplomatic trips in a way no other has done in a general biography. Reagan’s early years are vivid as well.

While filled with expert observation and insight this is very accessible to the average reader. It comes out at the right time when larger than life characters are good to look back upon and to examine in detail.

Solid story of President Reagan as a leader

I thought this was an excellent overview of President Reagan's life. Similar to "Crusader", it covers a lot of his pre-presidential life. I appreciated learning about President Reagan's days in college, Hollywood and working for GE. I think this book shorted some of the details of his presidency in exchange for details of his pre and post presidential years. The story of Reagan's decline with Alzheimer's disease was heartbreaking without being melodramatic. Overall a good story, but as with Patriot's History, Schweikart neglect's the greater impact of Ronald Reagan and his America upon the world beyond a few paragraph's.

Must book on Reagan

I have read other books regarding President Reagan that were good, but this is tops.

this is not an unbiased biography of Reagan but it is a fantastically written and well told story of Reagan's life and politics from the point of view of a Republican.
It was still thoroughly enjoyable.