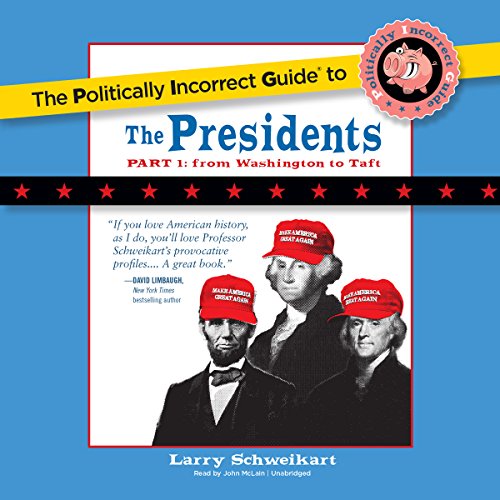 The Politically Incorrect Guide to the Presidents, Part 1

By: Larry Schweikart
Narrated by: John McLain
Try for $0.00

What listeners say about The Politically Incorrect Guide to the Presidents, Part 1

A to-the-point and enlightening summary

As a person that doesn't typically listen/read historical texts or analysis on past persons of power, I found this politically incorrect guide to the Presidents to be a concise summary of the impact of the first 26 presidents (Washington to Taft). While I wouldn't necessarily say its politically incorrect at all, I will admit that I hold some such views, so you as a different reader may get something else out of this entirely.
Overall, it's informative, clears up common falsehoods that may or may not have infected an individual, and gives not a thorough account, but a great highlight reel of the highs and lows of each president.
I eagerly await part 2!

Ruining History to Own the Libs

People really listen to this bullocks? This is an obvious attempt at selling cheap history through the lense of political sensationalism.

Not much of a PIG, but I didn't make it far

Someone who wants to hear some factoids, but not get a lot of higher level story lines that you may not have known or that may be impactful.

What could Larry Schweikart have done to make this a more enjoyable book for you?

The flow didn't have all of the items that make other PIG's so engaging. Questions. Obvious paragraph headings. The only "books you're not supposed to read" I made it to somehow felt very much like a nothing burger of a book; I doubt it's controversial of not PC at all, and it wasn't conveyed why I'm not supposed to read it.

Would you be willing to try another one of John McLain’s performances?

It isn't an enthused performance, but I didn't see why it would be.

Take the above with a grain of salt because I just gave up in the first hour, and found it hard to concentrate on, so I'm sure I missed plenty. I'll blame the reader in part for not being as animated as others, but if the material is good I can overlook that. I love the PIG series, but they usually sink their teeth into you at the start, and I especially like the ones with the paragraph flows that are shorter with clear side-bars and questions leading the chapters. These things keep you going, not wanting to stop, and looking forward to what's coming. The books you're not supposed to read are usually just that. Did this have these things? Maybe. Some. Again, I may have missed a lot, but all I kept picking up were little factoids that seemed like something he found and wanted to let you know that you didn't know this little thing. I didn't catch one sounding very PI. There were a lot of statements that were simply opinions, and PC opinions at that. OK, maybe you hold that opinion, but tell us why Hamilton is perfect when the PI'ers would have the opposite opinion. How is it PI to say what the PC crowd would? Maybe it is. I didn't get why. Maybe he does say why later. I didn't find it interesting enough from 'go' as most other PIGs. I strongly recommend Thomas Woods US History PIG if you want a true PIG. I would have liked opinions that disputed or at least didn't copy those, which you certainly will find here... they just seemed far too PC and not big enough or connected enough (from what I heard of course!).

review of the first 26 Presidents

This is the most Politically Correct of all of the Politically Incorrect books I have come across. Dr. Schweikart goes between insulting Liberals in one breath to saying things 4 in 5 of them would accept in the next. Not worth the time.

I love the history and coverage of many facets of the first 26 presidents. My only wish is that there was more detail and in-depth analysis. Still 5-stars

objective as can be

Very good overview yet as in all broad strokes of historical examinations many details are left out or controversy swept aside anecdotally. However, the author did a great job here covering the first 26 US presidents. bravo!

For as much as I enjoyed the Wilson to Obama book in the series, this absolutely ruins the pair.