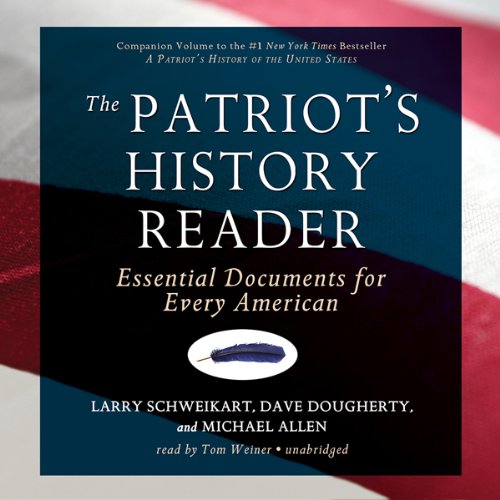 Since 2005, A Patriot’s History of the United States has become a modern classic for its defense of America as a unique country founded on the principles of justice, equality, and freedom for all. The Patriot’s History Reader continues this tradition by going back to the original sources—the documents, speeches, and legal decisions that shaped our country into what it is today. The authors explore both oft-cited documents—the Declaration of Independence, Emancipation Proclamation, and Roe v. Wade—as well as those that are less famous. Among these are George Washington’s letter to Alexander Hamilton, which essentially outlined America’s military strategy for the next 150 years, and Herbert Hoover’s speech on business ethics, which examines the government’s role in regulating private enterprise.

By helping readers explore history at its source, this book sheds new light on the principles and personalities that have made America great.

LARRY SCHWEIKART and MICHAEL ALLEN are the coauthors of A Patriot’s History of the United States and have each written several books on American history and politics.

DAVE DOUGHERTY is a self-employed businessman and has collaborated with prominent historians on their books, most recently on Schweikart’s What Would the Founders Say?

What listeners say about The Patriot’s History Reader

This became "heavy-handed" at times.

I probably should have expected that anything with the word "patriot" in the title would get a bit preachy and this lived up to my expectations. I enjoyed the choices of documents but I didn't need as much "commentary" as this book provided. Certainly, I am happy that I am educated enough to enjoy the documents and draw my own conclusions but this might be better titled "Some Essential Documents for Americans". Still, it was a nice July 4th listen with the fireworks going off in the background.