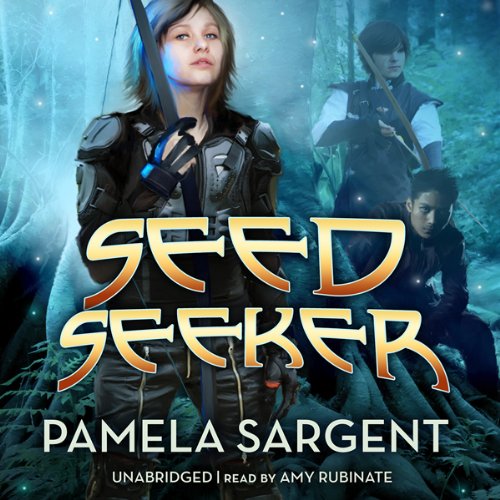 By: Pamela Sargent
Narrated by: Amy Rubinate
Try for $0.00

An adventure in colonization and conflict from acclaimed science fiction writer Pamela Sargent.

Several hundred years ago, Ship, a sentient starship, settled humans on the planet Home before leaving to colonize other worlds, promising to return one day. Over time, the colony on Home divided into those who live in the original domed buildings of the colony, who maintain the library and technology of Ship, and those who live by the river, farming and hunting to survive. The dome dwellers consider themselves the protectors of “true humanity” and the river people “contaminated,” and the two sides interact solely through ritualized trade: food and goods from the river people in exchange for repairs and recharges by the dome dwellers.

Then a new light appears in the night sky. The river people believe it might be Ship, keeping its promise to return, but the dome dwellers, who have a radio to communicate with Ship, are silent. So Bian, a teenaged girl from a small village, travels upriver to learn what they know. As she travels through the colony of Home, gaining companions and gathering news, Bian ponders why the dome dwellers have said nothing. Has Ship commanded them to be silent, in preparation for some judgment on the river people? Or are the dome dwellers lying to Ship, turning Ship against their rivals?

Whatever the answer, life is about to change radically on both sides of the divide.

“Sargent, without fanfare or hoopla, has become a strikingly able and unusual storyteller…Her real forte is characterization, an ability to dissect and lay open the fears, passions, and yearning of the intensely human people who invariably inhabit her books.” ( Atlanta Journal-Constitution)
“Pamela Sargent is one of the leaders in a new generation of SF novelists. She moves you through strange dimensions, she gives you people you can care about, she thinks deeply. I find her irresistible.” (Gregory Benford, author of Timescape and In the Ocean of Night)
“With prose as spare as the unadorned clothes and tools of her characters, Sargent digs down to the raw emotional roots below the contentment of a materially satisfied life.” ( Publishers Weekly)

What listeners say about Seed Seeker